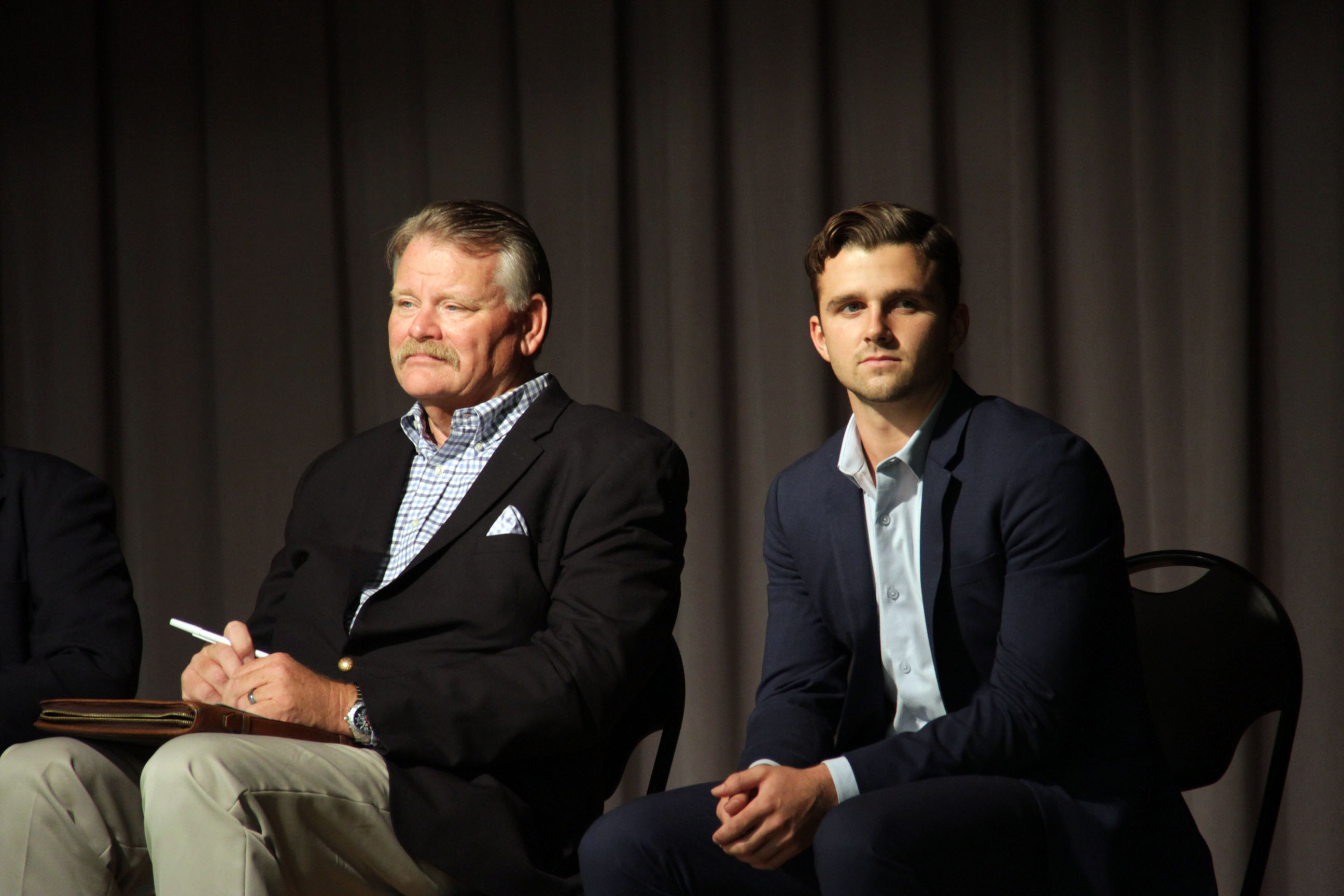 As of Sept. 21, Hinkle reported raising more than $18,500 in monetary contributions while James had collected more than $15,300. Both candidates had far outearned the other three council contestants, who had a combined total of $2,996 in cash contributions, according to the disclosure statements all five candidates filed last month.

Hinkle’s war chest had a total of $19,128, which included both monetary and nonmonetary contributions. He’s spent nearly $8,000 of those funds so far on campaign materials such as yard signs, custom shirts and advertisements.

James has expended close to $11,000 from his war chest toward advertisements, campaign signs and literature, office materials, fundraising events and web-related services.

Both candidates’ largest line-item expenditures were for print advertisements with this newspaper—$3,679.50 from Hinkle’s camp and $1,500 from James’ campaign. Based on a review of James’ list of expenditures, he spent most of his funds, about $3,500, for outdoor signs from COGS South Signs in Santa Ana.

Hinkle himself put up nearly $2,200 of his own money into his campaign, the candidate reported. His largest contribution was a $5,000 donation from the Orange County Professional Firefighters Association. The OCPF, Local 3631, has endorsed Hinkle’s bid for city councilmember.

The two candidates had also run unsuccessful campaigns for city council in the 2018 elections. James finished the race less than a percentage point behind Councilmember Kathy Ward, who was an incumbent that was reelected.

In this year’s race, both of their reported contribution levels have far exceeded what they took in during the 2018 race.

Hinkle has more than doubled the $7,232 he brought in from his 2018 campaign, while James’ cash contributions this year have tripled from what he earned the last time he ran, which was only $4,656, according to last year’s disclosure statements.

“I believe the large increase can be attributed to residents having a clear choice,” Hinkle wrote in an email. “They agree with my vision of preserving & protecting San Clemente, not my opponents that favor overdevelopment to help their special interest cronies.”

In a separate email to San Clemente Times, James attributed this year’s fundraising efforts to name recognition, having previously run for council, the creation of a campaign team and making “a larger personal investment” into the race. He also said “the perception of my campaign is very viable.”

As for the other three candidates, Mickey McLane has $1,500 in funds, Christina Selter collected $996 and Dee Coleman received $500 in contributions.

All the funds in McLane’s war chest came out of his own pocket, his disclosure statement notes. He’s spent more than $1,250 of his money on office supplies, buttons and newspaper ads with San Clemente Times.

According to Coleman’s disclosure statement, his $500 cash contribution came from one individual in Central City, Pennsylvania, who, the candidate explained, is a client of his.

An SC Times phone call to a number listed for the contributor in Pennsylvania was not immediately answered.

Though Coleman’s cash contributions amount to $500, his campaign funds totaled roughly $3,630 as of Sept. 21. His statement notes that he took out loans amounting to about $3,130, which he had mostly used to pay for campaign consultants and signs.

Selter also took out a loan of $500, putting the total contribution level for her campaign at $1,496. Her only listed payment for the latest reporting period is a $250 expense to Campaign Compliance Group for professional bookkeeping services.

The mail-in ballots for the Nov. 5 special election were recently sent out to the city’s voters. The last day to register to vote for the election is Oct. 21.