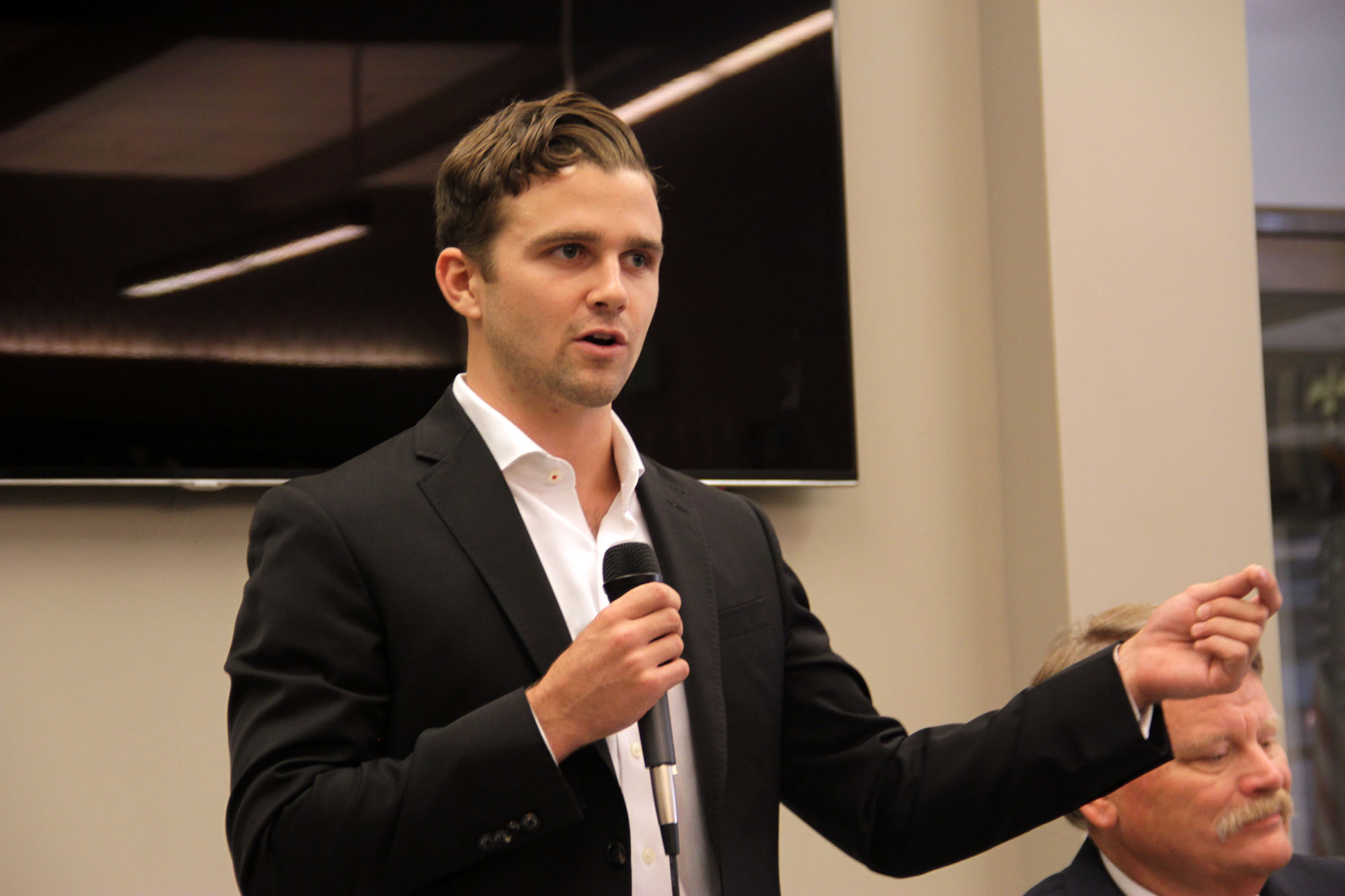 Comments that San Clemente City Council candidate Jackson Hinkle had previously made on social media, as well as a previous run-in with law enforcement, have become the center of his opposition’s efforts to paint him as unfit to lead the city.

An advertisement recently taken out with the print edition of this publication, and paid for by a handful of members of the community, slams Hinkle for a series of social media posts he wrote in which he criticizes the Orange County Sheriff’s Department.

And during the most recent city council meeting, San Clemente resident Tony Rubolino, one of the members of the group who paid for the political advertisement, spoke out against Hinkle, pointing to instances of the candidate getting arrested and taking a knee during the National Anthem, among other things.

In an email with San Clemente Times, Hinkle explained that while he believes the “police play a critical role in upholding the law fairly and firmly,” the city of San Clemente should have its own police department—a platform he has emphasized throughout his campaign.

A local police department, he wrote, “will be able to provide more services and officers at lower cost, will actually enforce the laws our city has on our books, will know their way around our community, and will be focused on community policing—unlike the Orange County Sheriff’s Department.”

The advertisement, which at the top reads “Jackson Hinkle Isn’t Ready and Isn’t Right for City Council,” highlights portions of four separate posts Hinkle had put on his Facebook account. In the first post, he writes about a city council decision to add two more sheriff’s deputies to the city’s police services.

“In fact, we should be moving away from encouraging a system that was designed to oppress and kill people.”

In another post, he states that “there are many ways we could prevent crime without adding more deputies . . . providing housing for the chronically homeless . . . legalizing sex work and certain drugs.”

Asked about these comments, Hinkle, who was unsuccessful in his run for city council in last year’s general election, said he’s learned a lot in the last year, as his views on the matter have matured.

“I’ve learned a lot about our community since my last campaign,” he wrote. “Going on a ride-along was an eye-opening experience and I’m happy to say that my views surrounding law enforcement have matured since posting that comment.”

Regarding his views on legal sex work, Hinkle said there’s been misinformation spread about his positions. The candidate said he is “categorically and unconditionally” against legalizing prostitution in San Clemente and that “any statements to the contrary are simply untrue.”

While addressing the city council on Oct. 15, Rubolino presented a slideshow he had put together that was meant to show why Hinkle isn’t fit for a seat on the city council. The first slide shows a photo of a bearded Hinkle being taken away in handcuffs by a police officer after blocking congressional offices in Washington, D.C.

In the next slide, Rubolino included a social media post about Hinkle taking a knee while the National Anthem played at the 2018 San Clemente High School graduation.

“While Jackson has the right to demonstrate, he is not free from scrutiny for what many would consider unpatriotic,” Rubolino said.

Rubolino later showed a clip of a home movie made by one of Hinkle’s friends. In the clip, Hinkle, while acting, guns down someone in a parking garage.

“What’s ironic here is that Jackson helped organize a walk-out to protest gun violence and voluntarily—because he’s not a paid actor—voluntarily participated in the glorification of gun violence,” Rubolino said. “And Jackson’s got a slew of Second Amendment concerns, and I think we should all be aware of that.”

Hinkle immediately followed Rubolino’s presentation at the Oct. 15 council meeting, stating that he remained proud of the demonstrations and protests in which he participated.

“So, clearly, we all make mistakes and my mistake was the beard and the acting,” Hinkle quipped at the council meeting. “Neither of those were good decisions on my end. But thank you, Anthony Rubolino, for highlighting my passion and the issues I care about.”

Hinkle further explained in his email to SC Times that the protest in D.C. was to demonstrate against House Speaker Nancy Pelosi’s inaction to combat climate change—an issue that matters “most to my generation.”

He added that the group of a few hundred people, including himself, had anticipated to be cited for protesting.

“No sentence or civil disability was posed for our political demonstration,” he wrote. “I believe this action highlights my dedication to the issues that I care about and it goes without saying that I am willing to fight harder than any other candidate in this election when it comes to stopping the toll road, fighting to remove nuclear waste from our coastline, and in working to bring back a hospital for San Clemente residents.”

Hinkle is one of five candidates running San Clemente’s special election for city council. The initial results of the election, which is being held to fill the position left behind by the late Mayor Steve Swartz, will be announced Tuesday, Nov. 5, around 8:05 p.m.

Editor’s Note: This article has been updated to clarify Jackson Hinkle’s public comments during the Oct. 15 city council meeting. The previous version of the story stated that Hinkle believed it was a mistake to participate in his friend’s movie.