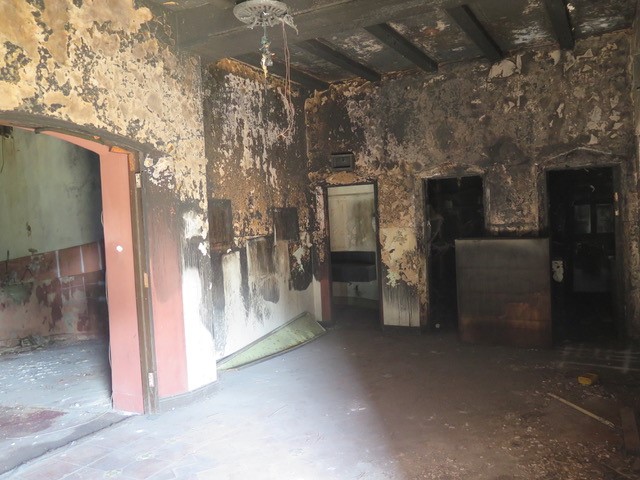 Historical Happenings: An Inside Look at the Miramar Project

San Clemente’s largest historic preservation project in years has begun, as the long-awaited restoration of the Miramar Theater and bowling alley complex in North Beach got underway in earnest this spring.

Opened in 1938 to much fanfare, the San Clemente Theater, as it was originally named, was praised as one of the finest movie palaces of its day in all of Southern California, according to news accounts at the time. It could seat 750 people. Early-day blockbusters such as Casablanca and The Wizard of Oz played there during their first run.

Reconstruction crews quickly found it will take more than the powers of the Mighty Oz to rebuild the landmark. A February tour inside the two buildings was hardly a stroll down the Yellow Brick Road.

For nearly 30 years, the site has been home to pigeons and homeless and rats. Oh, my! We felt like burning our clothes afterward. The stench was overpowering even though we wore face masks.

The San Clemente Bowling Center was opened in 1947 and is in even worse shape. The plan was to add a basement under the bowling alley to support 10 to 12 restaurants and an outdoor food court on the ground level.

But, as workers began drilling into the current foundation, it became obvious that the damage was so severe, the foundation could no longer support the building.

“The materials are too rotted, and the building would not be safe,” said Jonathan Lightfoot, city preservation official.

The city and the site’s owners, Landmark Foodhall LLC, announced earlier this month that the building would have to be demolished. This, of course, raised alarms at the Historical Society.

“When we heard the bowling alley was going to be destroyed, we were afraid the project would not qualify as preservation,” said Larry Culbertson, Historical Society president.

Those initial fears were lessened during meetings last week between the Historical Society board, city planners and the project principals.

“Yes, the foundation will have to be replaced and the building dismantled, but it will be rebuilt using as much of the original building materials as possible,” said project architect Daniel Conrardy.

Many of the original ornate roof trusses or beams are in good shape and will be used. Surprisingly, even some wood from the bowling lanes can be repurposed as table countertops or in the bar in the food court.

Meanwhile, over at the theater, things look better despite damage from a 2005 fire that gutted some of the lobby.

“There’s a lot of mold, some asbestos and water damage, but we can handle that,” Conrardy said. The inside mold has already been removed.

At one time or another, the property housed several different businesses, including a Texaco gas station and an Orange Julius.

The theater, which was renamed the Miramar in 1970 and closed for good in 1992, will become an events center. Because of the setback and coronavirus shutdown, the reopening date has been pushed into sometime next year.

Both the theater and the bowling alley are on the city’s Designated Historic Structures List. The developers hope to get the theater placed on the prestigious National Register of Historic Places.

The bowling alley portion has previously rolled a gutter ball and been rejected by the national register. Stay tuned for further developments.