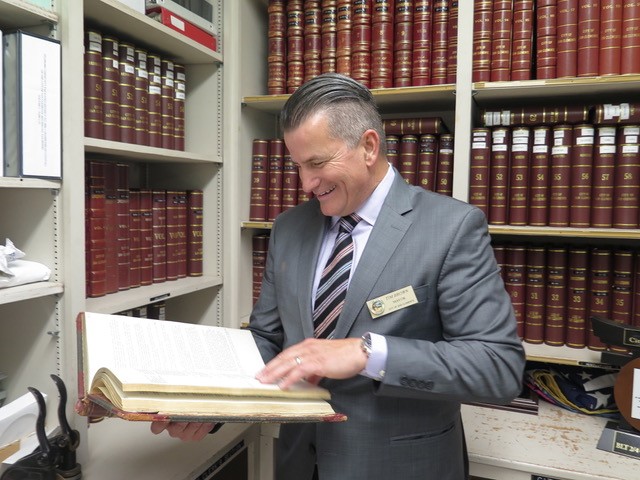 As one of his last requests as San Clemente’s mayor, after not seeking re-election, Tim Brown is calling for the digitalization of the city’s original legal documents. Currently, hard copies of all city council minutes, resolutions and ordinances are stored in a city vault inside bound volumes.

The historic significance of these documents is obvious.

“These volumes apparently contain the only copy of the documents. I appreciate that they are stored in a protective environment, but what I want is for them to also be professionally digitized for their protection and easier reference in the future,” Brown explained as he displayed some of the items for us.

We, at the Historical Society, couldn’t agree more.

The volumes, mostly written on a typewriter, not only provide the required legal record of city decisions but interesting accounts of issues, large and small, that made up the fabric of early San Clemente. The very first item on the first San Clemente City Council meeting agenda of Feb. 29, 1928 (yes, San Clemente was born in a leap year) was declaration of the organization of the city. At that same meeting, Ole Hanson, Jr. was nominated to be the first president of the city council. The title mayor didn’t come until later. Controversy swirled even on this first step of cityhood. Hanson declined the nomination, and Thomas Murphine was then selected as the first president.

It appears the two board members were bitter foes, at least during later years.
In the minutes of a board meeting in November 1933, Murphine “refused to refund $100 to the city for his services in a legal dispute between the city and John Forster.”

“Hanson apparently took issue with this. There are reports that a fistfight broke out,” the minutes stated. While this is not in the official record, city ordinance XLII was passed about the same time, “amending rules for conducting the proceedings of the city council and providing for the punishment of any member or any person for disorderly behaviour [sic] at any meeting and also for compelling the attendance of absent members.”

But, back in the first few months of our city, the council quickly got down to business. Its first significant purchase was a fire truck (Resolution 5). On May 16, 1928, the council outlawed fireworks. Even then fire danger was a major concern in this area. The fireworks ban took effect a month before the council even approved a numbering system for houses on city streets.

These are but a few of the curious gems from our city’s official record. We in the San Clemente Historical Society support Mayor Brown’s call for digitizing these important records.

Tom Marshall is a member of the board of directors of the San Clemente Historical Society and a retired journalist.