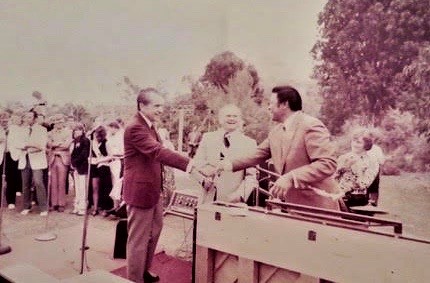 The first female movie star, Gloria Swanson, built a second home here in 1926 before the city was even officially born. The 2,600-square-foot house is still standing on Cazador Lane in the Pier Bowl, which according to a newspaper ad was originally known as the “Pasadena Colony” historic district. The asking price in 2009 was $3.2 million.

Starting in silent films, Swanson went on to become one of the highest-paid actors in Hollywood, commanding $250,000 per picture. A three-time Oscar nominee, she is perhaps best known for her work in 1950’s Sunset Boulevard.

Anne Debbs got to know Chaney, who was best known for starring in The Wolfman movies of the 1930s. At 6 feet, 3 ½ inches tall, he was one big wolf.  That apparently didn’t worry the guy who stole Chaney’s car from in front of his home one night in 1966.

Debbs said Chaney didn’t talk much about his movies, but contrary to his scary film image, “he was the sweetest man.”

Musician Jerry Velasco has lived in San Clemente for decades. He was a favorite of the Nixons when they were in town. He also worked in films with Elvis Presley and Sammy Davis, Jr., among others.

Comedian Martha Raye was a frequent visitor and actually ended up in the local hospital after attending one of Velasco’s parties.

Back in the 1930s, Bing Crosby’s car broke down here as he was traveling between L.A. and San Diego. Legend has it, while the car was being repaired, ‘der Bingle’ got in a short round of golf.

Actor James Arness, Marshal Matt Dillon of TVs Gunsmoke, used to surf here in his younger days. The 1930s band leader Fred Waring (Fred Waring & the Pennsylvanians) owned Casa Romantica for a time, though it was used mainly by his ex-wife.

And, of course, dozens of stars including Judy Garland performed at Casino San Clemente over the years.

I’m not aware of any Hollywood royalty living here now, but a couple of near “A-listers” do. Jazz singer/songwriter Elizabeth Lamers has performed all over the world, including London’s Royal Albert Hall, New York’s Radio City Music Hall and the Sydney Opera House in Australia.

“I moved here from L.A. years ago. I’m never moving back,” she promised.

Country singer Kelly Rae Roemer (Kelly Rae Band) also lives here. She performs across the country, including in Las Vegas and at Disneyland, and doesn’t know why more performers aren’t based here.

It used to be that you had to be in Nashville or Bakersfield if you wanted to make it in country music.

“But now with internet booking, you can live anywhere and continue working,” she said.

So, Pitt, Streisand, what are you waiting for—an invitation from the mayor? Oh, wait, we don’t have one. That must be the problem.