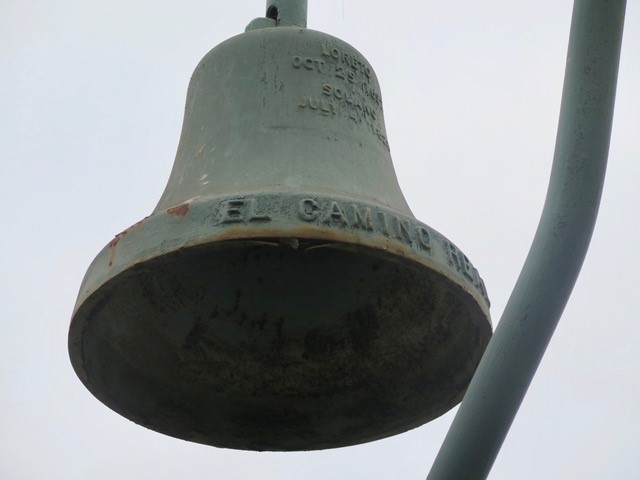 Historical Happenings: For Whom the Bell Tolls

Several Native American tribes in California are mounting a campaign to remove symbols marking El Camino Real, the road that once connected all of the missions from San Diego to Sonoma County.

The markers were replicas of the iron bells featured in each mission. One in San Clemente is on El Camino Real at Avenida Del Mar, in front of Sit ’N Sleep. There are several others that look similar, but are street lights.

Some of the tribes have a petition before the legislature and Gov. Newsom, calling for the removal of the markers from Highway 101 and all state property.

Historical societies, by nature, are protective of preserving our past. But, sometimes, the issue is complicated by the nature of what the past has wrought. This is one of those situations.

Many people, both within and outside the tribes, consider the bells a symbolic celebration of the hurtful injustices forced upon the native peoples by the proprietors of the mission system.

As Valentin Lopez of the Amah Mutsun Tribal Band recently wrote in a Los Angeles Times Op-Ed, “They celebrate the Spanish mission system which seized Indigenous lands and sought the elimination of tribal cultures.”

What happened to the tribes was clearly brutal, unjust and just plain wrong by our current standards of enlightenment. But, a case can be made that removing the 585 bells will have the effect of ignoring what happened during those darker days of human enlightenment.

As humans, we need frequent reminders of our previous mistakes, cruelties and blunders, or they are bound to happen again. Are you reading this, Mr. Putin?

Comparing the past with our current culture can be a tricky business. The old adage that history is written by the victors should no longer be acceptable. There are usually multiple viewpoints of events.

In this instance, you can look at the bells from a different perspective. They celebrate the toil and craftsmanship of the enslaved artisans, who did the actual work even while in bondage.

If you perceive the bells as symbols of suffering, then shouldn’t we also remove the missions themselves? Or the entire Catholic Church, which sponsored the construction in the first place? Where do you draw the line?

Perhaps it is better to leave them there as reminders of what happened, so it never happens again.

The roadside bells were installed not when the missions or the Royal Road were built. They were erected in the 1900s to attract tourists. Hopefully, they will lead thousands of tourists and schoolchildren to the historic missions, where they can learn the full unabridged story of how the missions came about and the effects they had on the native peoples.

Rather than removing all the bells, wouldn’t it be better to add companion markers that feature the likenesses of the native tribes who survived the era of the missions and continue to celebrate their cultural heritage and practices today?

On Life and Love After 50: A Widower Seeks Clarity

Adoptable Pet of the Week: Remus