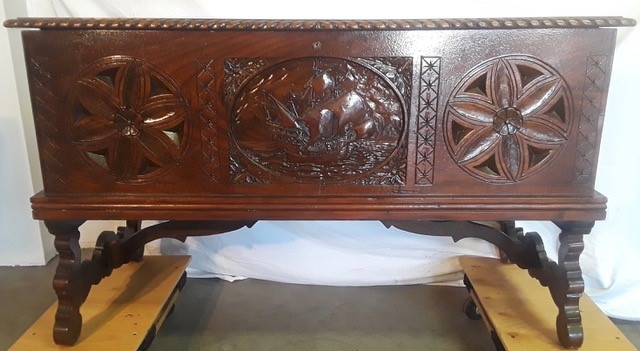 Over four decades, John Hall was a consummate journalist at Southern California newspapers, including a long stint as sports columnist at Los Angeles Times and then the Orange County Register. He was also the grandson of San Clemente’s first mayor, Thomas Murphine.

When Hall died three years ago at age 90, he left his San Clemente house full of local history. After deciding to move to Oregon, Hall’s widow, Toni, called the San Clemente Historical Society a couple weeks ago with an offer we couldn’t refuse.

The family had seven pieces of furniture from Thomas Murphine’s home that were rescued as it slid into the ocean over a few days following the 1933 earthquake. Toni was willing to donate the items if we would pick them up.

We jumped at the chance—hopeful that someday we will once again have a museum in which to display them to the public. Readers who have been here awhile might remember we had a museum in the downtown area until the rent became unaffordable.

Since its closure, the items have been in storage. We’re hoping we can raise funds from corporations or individuals to relaunch the S.C. History Museum. City officials are also trying to locate a place for us. If you can help us, email the society at sanclementehistoricalsociety.org.

The Hall items include several large wooden chests with intricate carvings of sailing ships, a rare floor-length 1929 Edison radio also with wood carvings, a large wooden table and a cabinet with a fold-down secretary desk.

After a little elbow grease from Historical Society president Larry Culbertson and his wife, Jaine, the items appear in shiny perfect condition. One of the chests has town founder Ole Hanson’s crest carved on it and probably was Ole’s originally.

But wait; there’s more. As a journalist, it’s no surprise he read a lot. But, he left behind more books than some libraries have. These, too, we accepted. Many were about sports (naturally) and movies (he’d thought of being a screenwriter at one time) or were novels outside our mission statement, so we donated those to the San Clemente Library’s book store in Hall’s name.

There were, however, a few books on California history that we added to our collection; some were even inscribed by Murphine and dated as long as 90 years ago.

One that caught my eye was titled Los Angeles in the Sunny Seventies. I remember visiting L.A. in the 1970s, and it didn’t seem all that sunny. Then I noticed the publishing date: 1929.  It is about sunny L.A. in the 1870s! What a read.

We’d like to thank the Hall/Murphine families for their generous donations to our city’s cultural beginnings.