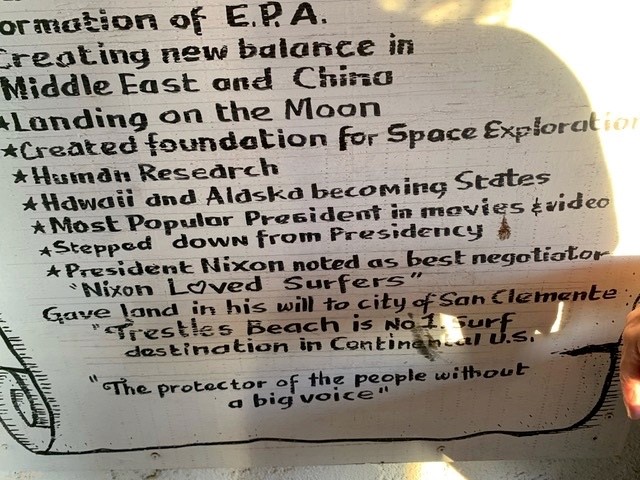 Attached to a wall outside the Andalusia Restaurant in San Clemente’s Old Town Plaza is an ornate list of accomplishments of former San Clemente resident and President Richard M. Nixon.

Toward the bottom, it states, “Gave land in his will to city of San Clemente.” A reader contacted the San Clemente Historical Society to find out if that is true, and if so, where is this land?

The answer is, like the man himself, a little ambiguous. We found the Nixon will. The lengthy Feb. 25, 1994 document makes no mention of an outright grant of land to the city.

Over a million dollars in cash (presumably much of it from the sale of his San Clemente estate at Cotton’s Point) and personal property was willed to the Nixon Presidential Library in Yorba Linda. The rest of his assets were divided up among his family members.

We don’t know who painted the scroll or when it was painted. But, it has sparked questions. The Nixon Library has no record of any property Nixon willed to San Clemente. Current and former city officials have no record of Nixon giving land to the city, either, but they point to a couple of transactions the author of the scroll might be referencing.

Economic Development Officer Jonathan Lightfoot and Councilmember Chris Duncan note that Nixon, along with then-California Gov. Ronald Reagan, did help negotiate the 50-year lease with the Navy for the Trestles State Beach areas near the Western White House.

That lease expired earlier this year, and a three-year extension has been agreed upon while a long-term lease is being negotiated.

Nixon liked to walk that stretch of beach when he was in town. That resulted in it being off-limits to others, including surfers who considered it the prime surfing spot in this area.

The mystery scroll also mentions Nixon’s love of surfers. When made aware of the surfers’ unhappiness, he then cut the deal with the Navy so surfers and others could return to Trestles.

Meanwhile, Nixon made a lonely beach, named Red Beach, on Camp Pendleton his place for private and secure beach time. That required a 13-mile helicopter ride from his residence. After resigning the presidency, Nixon was driven to the spot by Secret Service agents.

Wayne Eggleston, a former San Clemente mayor, pointed to a second transaction the painter might be referencing.

“The land someone may be referring to is the adjacent Navy land where (Nixon) had a helicopter pad, now Marine housing, but it was never San Clemente land,” explained Eggleston.

When the former President moved from San Clemente to New York City in 1980, he probably wasn’t particularly happy with our town’s government at the time. He had wanted his presidential library located here, but city officials dithered due to traffic concerns, among others.

Ironically, they built the Outlets at San Clemente there instead, and are bending over backward to attract people to shop there.