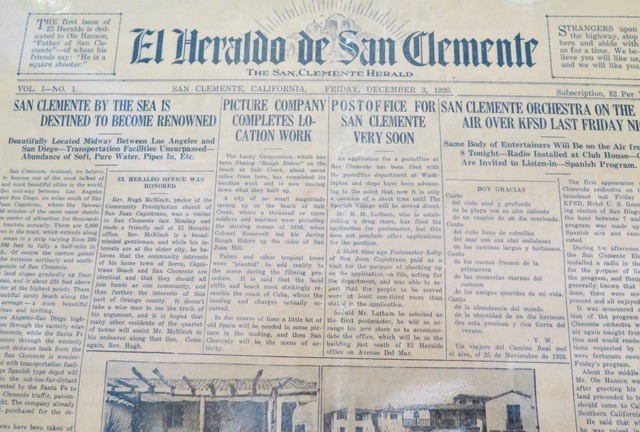 Historical Happenings: Newspapers Were the First Draft of City’s History—Read All About It!

Local newspapers were there from the very beginning to chronicle our beautiful city’s history, starting with El Heraldo de San Clemente.

The front-page headline on the first issue of the weekly paper on Dec. 3, 1926 announced that “San Clemente by the Sea Is Destined to Become Renowned.” It also praised founder Ole Hanson for his vision for the city. While he wasn’t the publisher of the broadsheet, Ole was a not-so-silent financial partner.

We get a sense of life here at the very beginning from other stories in that first issue. San Clemente already had its own orchestra, which would perform live on San Diego radio station KFSD. This broadcast was just five years after the first commercial radio station had gone on the air at KDKA in Pittsburgh.

As such, few people here had radios. So, Ole purchased one, which he installed at the newly built Club House so that locals could listen.

Another headline announced the big news that there would be a “Post Office for San Clemente Very Soon.” One of the first advertisements encouraged people to use more electricity—a far cry from the situation today. The subscription price to the eight-page weekly was just $2 per year.

A week later, El Heraldo announced the first factory in San Clemente.  It was being built at the top of Avenida Del Mar, where the Old City Hall building is today. The factory would produce hand-carved “office furniture, picture frames and mantel pieces.”

Another headline in that second edition proclaimed: “God May Go on Vacation Sometimes, But Real Home Is in San Clemente. Ole Hanson Says So and That Makes It So.”

That second edition also introduced a local gossip column, Around the Town. One item noted that a Mr. Huteson had been in town since the first lots went on sale, even though his home hadn’t been built yet.

“He has been living in tents, rooms, and, we believe, for a few nights hung up on a harness hook in the barn. Mrs. Huteson, who was a little more particular about her place of abode … spent part of her time in Los Angeles.”

El Heraldo’s first editorial proclaimed the virtues of Prohibition in the United States—an odd position considering the town’s bootlegging reputation at the time.

“Sundaes and drugs are for sale, and it features leather padded chairs and a pretty girl to wait on you.” Yikes, how times have changed.

The first wedding in San Clemente was covered in the Feb. 4, 1927 paper.

Next month, we will continue our history of newspapers with more accounts from El Heraldo and other local publications. Happy New Year from all of us at the Historical Society and San Clemente Times.