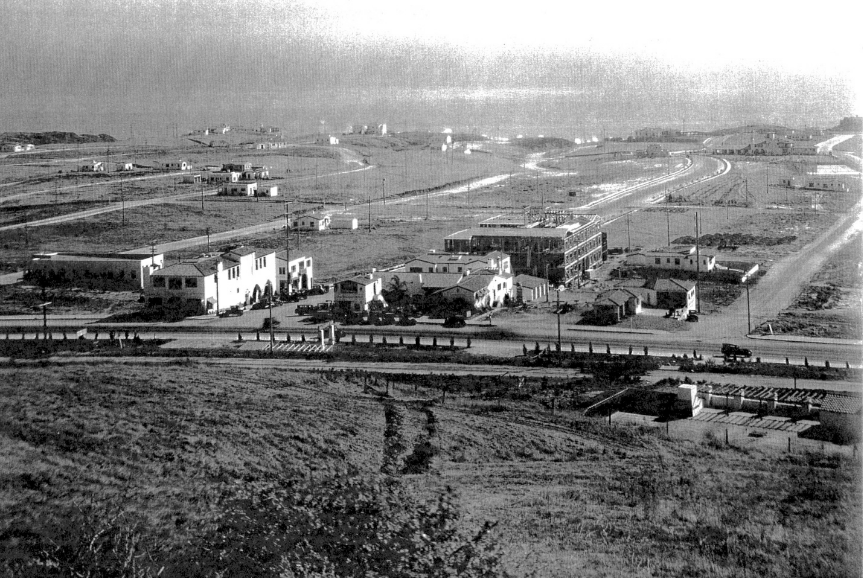 The unique character of San Clemente is directly attributable to the demanding tenacity of a single individual: a real estate developer of Norwegian decent originally from Wisconsin by way of Washington state, where he had served as state legislator and later even as Mayor of Seattle. This man was Ole Hanson. When Hanson set his sights on bringing to life his vision of a Spanish Village in America, he was no novice to the world of real estate development. Hanson’s involvement in such ventures stretched back to the early 1900s with his successful development of Lake Forest Park on the north shore of Lake Washington and his ownership of lots of land around Puget Sound Naval Yard. He made a lot of money in the Pacific Northwest and then lost his fortune in the economic downturn that followed World War I. Finding himself heavily in debt, Hanson left the Seattle area for Mexico City, where he gained 50 percent ownership of 52,000 acres of oil fields worth half a million dollars for his role as arbitrator in a large land dispute. But alas, once again, when the oil market took a sudden dive, his fortunes changed and the land became virtually worthless. He returned to the U.S. to start all over again.

Hanson was a more seasoned business man at this point of his life due to these adversities and the successful run of developing the 2,000-home Slauson Avenue Tract in Los Angeles and the almost 600-room magnificent Potter Hotel in Santa Barbara. But Hanson then witnessed the devastating impact of the Santa Barbara earthquake of 1925 and became inspired by that town’s deliberate embrace of Spanish-style architecture as it set out to rebuild in a planned manner. This style, complementary to California’s Spanish cultural history, had been introduced at the Panama Pacific Exposition in San Diego in 1915. Hanson was contacted by his long-time business associate, millionaire financier and oil man Hamilton Cotton to head up a syndicate of bankers and businessmen to purchase the land that would become San Clemente. He decided to make the building style reminiscent of the Mediterranean villages and towns of the south of Spain the guiding inspiration for this latest real estate venture. He articulated his vision for a Spanish-style planned city in these words: “I envision a place where people can live together more pleasantly that any other place in America. I am going to build a beautiful city on the ocean where the whole city will be a park; the architecture will be of one type.”

Hanson had first seen this area of the California coast years earlier on a train trip from Los Angeles to San Diego—a stretch of coastline in the region that he determined to be perfectly suited for the building of his dream city. Located exactly midway between Southern California’s two main cities, the property was linked to Los Angeles and San Diego by the main line of the Santa Fe Railroad and El Camino Real. Additionally, the site was unique on the Southern California coast, consisting of rolling hills that sloped gently down to the ocean, as opposed to the high cliffs that define much of the region’s coastline. On Nov. 8, 1925, the Los Angeles Examiner announced the founding of the new city of San Clemente, the Spanish Village.

Reaction to the announcement was mixed, with many, particularly those involved in real estate, openly questioning the wisdom of establishing a new town some 66 miles from Los Angeles or San Diego. According to Hanson’s biographer, Homer Banks, some referred to the plan as a “hare-brained scheme,” while others said Hanson himself was “just plain crazy.” Even his financial associates were pessimistic.

There had never been a city there before, and worse than that was the fact that Hanson did not talk about profits, but about building in a certain style, the Spanish style of architecture only, and dared to put in his sale contract a clause that forced all who wanted to build to submit all plans to an architectural board for approval.

Raad Ghantous is the president of the San Clemente Historical Society.