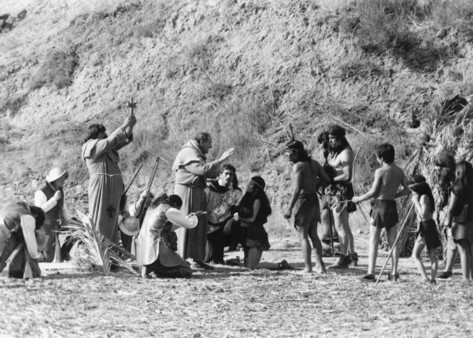 Just south of San Clemente’s city limits, in a small canyon on what is now Camp Pendleton, the first baptism in California was held on July 22, 1769. Two critically ill Native American girls were baptized by two Catholic priests, despite objections from the girls’ parents. The event has been celebrated on and off since the 1950s in San Clemente.

In 1953, local resident Jennie Belle Bartlett wrote the script for a one-act historical pageant depicting the baptism ceremony. The play was to be presented to the staff of Los Angeles radio station KFI-AM, who came to town by train for a staff beach party every year.

Titled La Cristianita, the play was done in pantomime with a narrator, and was so popular that it ended up becoming a yearly event into the 1960s. Over the years, it was held in several locations, including the lawn of the Community Center.

The performances relied on a huge number of people from the Community Theater group and other volunteers, and the play was sponsored by the Chamber of Commerce. In the mid-1960s, it was moved to Bonita Canyon, but neighbors complained about noise and traffic, and the pageant was discontinued in 1965. But, that was not the end.

In 1975, local historian Bertha Henry convinced movie producer/director Norman Wright of San Clemente to rewrite the script into a more professional three-act play. It was based on the diaries of Father Serra and Father Crespi.

The plan was to perform the play only in 1976 for San Clemente’s part in the nationwide Bicentennial celebration. Prices ranged from $5 for adults to $2.50 for kids. It was a huge hit and won a $5,000 Disneyland award as the most innovative event in Orange County.

It wasn’t without controversy, however. In 1978, bowing to critics who thought it was a religious propaganda play, the name was changed to The Cross and the Arrow, Pageant of La Cristianita.

Even a few weeks ago, an LA newspaper columnist criticized the play for using White people to play the parts of Native Americans.

Keep in mind, this was at a time when even Hollywood used actors such as Mickey Rooney to play an Asian American, with false buck teeth no less, in Breakfast At Tiffany’s. There were few, if any, Native Americans among the local volunteers, so they made do with what was available.

Twelve years later, it all ended sadly with a years-long battle between the Internal Revenue Service and the nonprofit pageant association over unpaid federal taxes.

Now, with San Clemente’s 100th anniversary and the 250th U.S. birthday looming, there may be interest in resurrecting the pageant again.

What do you think? Cabrillo Playhouse, Chamber of Commerce, Historical Society—any takers?

On Life and Love After 50: A Widower Seeks Clarity

Adoptable Pet of the Week: Remus