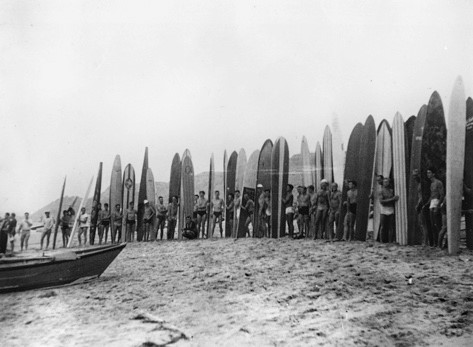 The book San Onofre—Memories of a Legendary Surfing Beach by David Matuszak is heavy—not the writing, the actual book. At 1,481 pages and weighing nearly 12 pounds, it is the heaviest book I’ve ever read.

“The project began as a 50- to 100-page booklet highlighting the memories of just one pioneer surfer, Wally Duester,” said Matuszak.

He originally thought it would take about six months to complete. It ended up taking eight years of full-time work. It evolved into not only the history of the iconic surfing spot, but the entire history of surfing from its beginning in the South Pacific to canoeing, the town of San Onofre, the native peoples who settled in the area originally, and even the building of the San Onofre Nuclear Generating Station near the beach.

Add to that the origins of surfboard making, surf music, photography, literature, film and surfing automobiles, and you have the most comprehensive work ever compiled on surfing.

Matuszak will give highlights of his work during the San Clemente Historical Society’s next quarterly event, from 6-8 p.m. on June 9 at the San Clemente Community Center, located at 100 Calle Seville. The program is free and open to everyone.

The book is loaded with historical tidbits. Many of his tales I’d never heard before.

Matuszak notes, for instance, that humorist Mark Twain was an early reporter of surfing. He was on assignment in Hawaii (then called the Sandwich Islands) for the now-defunct Sacramento Union newspaper in 1866.

Twain even tried his hand at what was called “surfing-bathing” without much success. He rarely mentioned it during his many lectures on the Sandwich Islands.

Matuszak and others believe that Twain was sensitive to the fact that nudity was a common aspect of the sport then and that it would have been inappropriate to talk about it in front of a mixed audience.

The book includes what may be the first photo of surfing, from 1890. There are more than 5,000 photographs in all.

Car buffs will also enjoy the section on the iconic surfer vehicle, the Woodie. Also highlighted is the role of various Volkswagen and other auto manufacturers’ vans.

The controversy over the nuclear plant is covered in detail. Matuszak reports the surfing community was “all against it.” Besides the general concern about the plant’s safety, the surfers worried about its impact on erosion and water quality.

But the heart of the story are the people who made up the surfing community around San Clemente and the world.  Many were larger-than-life characters; most were just out for a good time in the warm California sun.

Even President Richard Nixon had an impact on local surfing. His residence in Casa Pacifica forced security to close nearby surfing beaches to surfers, until Nixon himself went to bat to allow the surfers back in.

Matuszak’s program at the Historical Society will include many of the historic photographs. You can also purchase a copy of the book at the event. Begin strengthening your arms now.