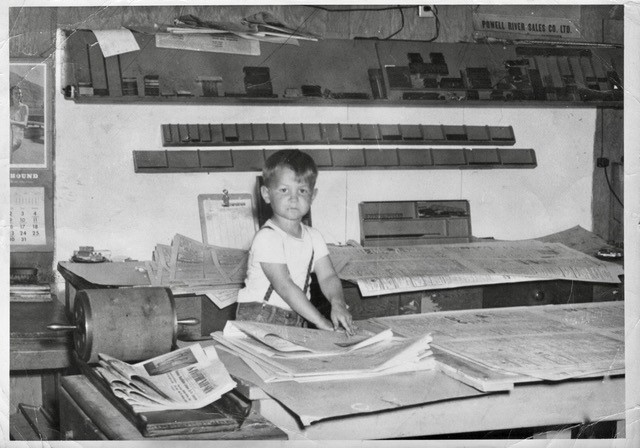 There is an old axiom that a newspaper is the first draft of history. So, it should come as no surprise that the San Clemente Historical Society leadership is very supportive of local journalism.

Our town has had a local newspaper almost from Day One. First to land on subscribers’ doorsteps (or close to them) was El Heraldo de San Clemente.

Published by D. D. McDonald with Assistant Editor J.H. Caskey, the paper was printed on what McDonald bragged was the most modern and sophisticated presses in existence. Residents were encouraged to drop by the office to watch the presses roll into action.

The paper came out every Friday. A yearly subscription cost $2. Usually just four pages, The Herald, as some people called it, covered events large and small—everything from the plans for a new public facility to who hosted a dinner party for friends.

The first issue, dated Dec. 3, 1926, expanded to eight pages to introduce itself. In the opening editorial, McDonald predicted “the time will be long and the path rosy,” speaking of the future for the town and the paper.

Page One headlines in this first issue announced that San Clemente would very soon have its own post office, and a public school was in the making (to be donated by Ole Hanson).

Another story laid out plans to beautify the new city by planting various trees and shrubbery along its streets. Each street was going to have its own botanical fingerprint, such as Jacaranda on Avenida Palizada, Oleander on Avenida Del Mar and Monterey Cypress on (of course) Avenida Monterey.

But the lead Page One story chronicled the performance from the previous week of the San Clemente Orchestra on KFSD Radio live from the U.S. Grant Hotel in San Diego. It didn’t explain much about who was in this orchestra or what music it played, but it noted Ole Hanson had a radio installed at the Club House.

“There were several residents present and all enjoyed it hugely,” the paper reported.

Halfway through the program, Ole was introduced and pitched the radio audience on the advantages of moving to Southern California. He then offered $50 in gold for the person living farthest away from San Clemente who telegraphed the program by 8:15 p.m.

El Heraldo lasted until 1934, when it fell victim to the Great Depression. The Historical Society has 137 of the 376 issues. We are very interested in obtaining the rest.

In 1937, The San Clemente Sun began weekly publication. The rival San Clemente Post appeared in 1953. Two years later, it was purchased by The Sun. Both continued, on different days of the week, until they combined as The Sun Post in 1959.

Starting in 1963, the Daily Sun Post published Monday through Friday. In 1993, it was purchased by the Orange County Register, which had tried to compete for a couple years with its own San Clemente News.

Downsizing quickly followed, with the Sun Post News going to three days a week, then two, and, finally, weekly. The end came a couple years ago, a victim of the nationwide newspaper crisis.

Perhaps its greatest accomplishment was the employment of Fred Swegles, who has reported here for five decades and counting, but that is the subject of another column.

In 2006, as many small-town papers were folding, Norb Garrett bucked the trend, founding Picket Fence Media, publishers of the San Clemente Times.

Garrett believed “a forward-looking newspaper in print that gave you local news you can use” in a modern magazine format could still make a go of it. That bold move kept local journalism alive and well, at least until the arrival of the coronavirus, which has sapped the life out of local businesses and their advertising dollars.

We ask everyone to join the board members of the Historical Society and subscribe to the Insider. Keep local journalism alive.