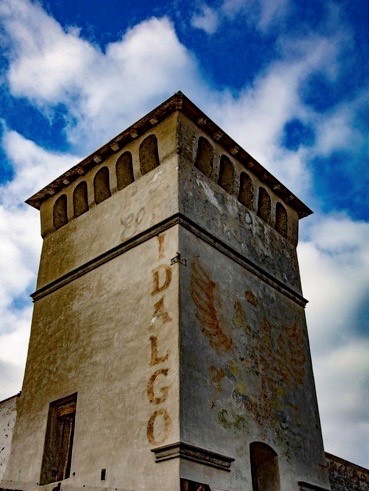 The restoration and rebuilding of San Clemente’s historic Miramar Theater and bowling alley complex has continued despite the pandemic. Some interesting artifacts from the Miramar have been discovered over the past few years.

It started when someone turned over to the San Clemente Historical Society a couple dozen canisters of old movies from the 1920s and ’30s that they found in an alley next to the theater. We, in turn, donated them to the UCLA film archives.

A few filled holes in the school’s massive collection.  Others such as Don Juan, Phantom of the Opera, and Mutiny on the Bounty were early-day blockbusters.

“Quite a few of these are very famous … some are even considered classics,” notes San Clemente Times movie columnist Megan Bianco. Two films, Greed and Intolerance, were big influences on modern film directing, she points out.

Also left behind by the previous owners was the projection equipment, still set up as though a movie was about to start. Sitting there unused for 30 years, the projectors are probably destined to be a decoration or museum piece for the project.

While sand blasting the theater’s exterior this fall, workers uncovered the original artwork painted on the stucco.

A fresco depicts a Spanish-style crest on the building’s tower while a hand-painted sign sports “El Hidalgo,” used for promotional photos of the theater before it opened as San Clemente Theater.

“We will be pushing the developer to restore the original fresco and sign,” says Jonathan Lightfoot, the city’s economic development officer.

In the neighboring San Clemente Bowling Center, wood from the actual alleys has survived quite well, even as the building itself greatly deteriorated over decades of disuse. Plans are to repurpose wood from the lanes into counter tops for a bar or tables for a new food court.

The hope is the project will be completed late next year, with a grand reopening ceremony capping off years of bringing the North Beach area back to its original glory and perhaps landing on the National Register of Historic Places.