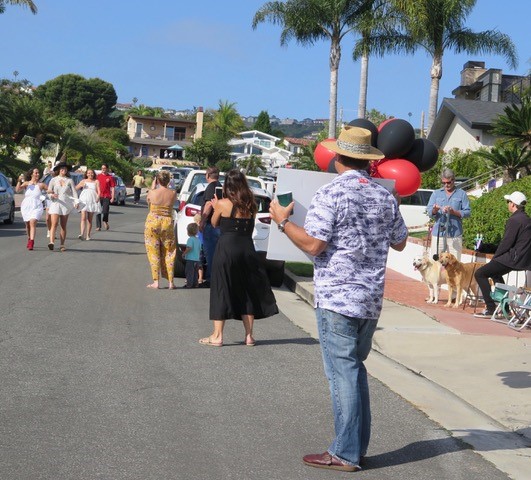 The graduating classes of 2020—or some call it, the Coronavirus Class—definitely drew the short straws.

Besides not being able to finish the school year in their classrooms, the grads will miss out on such rites of passage as senior prom and possibly even the formal graduation ceremony with family and friends in attendance. Also among the casualties is the annual San Clemente High School awards ceremony.

At least one neighborhood, the 200 block of Avenida Gaviota, held a block party this month for recent grads. On the positive side, though, thousands of dollars in scholarships will still be awarded to dozens of college-bound students from various local businesses and nonprofits.

The San Clemente Historical Society is proud to announce this year’s two recipients of its $500 scholarships. A portion of the scholarship program was funded by Picket Fence Media, the publishers of the San Clemente Times.

The applicants were required to be graduating SCHS seniors and were asked to describe their school and community activities involvement, plus write a 350- to 500-word essay on the importance of historic preservation.

“The committee was extremely impressed by the high caliber of the scholarship applicants,”

Tristen Wallace, 17, wrote about the impact that a recent trip to the Getty Villa in Pacific Palisades had on her. A reconstruction of a Roman villa destroyed during the eruption of Mount Vesuvius in 79 AD contained many artifacts of daily life in that era.

“I find it fascinating to compare current society to that of the past to see the consistencies in human nature, as well as the differences,” Wallace wrote.

Interested in studying art, Tristen is the founder and president of the school’s Art and Design Club who has painted and designed sets for plays, in addition to teaching art. She has also tutored children, was an active member of the school’s Cool 2 Be Kind anti- bullying club, attended city council meetings and served as publicity chair of the Fashion Club while maintaining a 4.55 grade-point average.

Alysse Banks, 18, wrote her essay about her experience visiting the Holocaust Memorial in Washington, D.C.

“Seeing the different artifacts, reading about each person’s individual story . . . made everything that I had read about feel that much more real,” she wrote.

Corless commented that she was impressed by Banks’ “heartfelt essay about that experience.”

Alysse was vice president of the school’s Popcorn and Politics club that teaches students how to debate civilly, was selected to attend the Pomona Freshman Leadership Conference,  has worked as an event assistant and volunteers at the Coral Thrift Shop while maintaining a 4.2 GPA.

Wallace and her two sisters are being raised by their disabled veteran single mother, Kimberly. At least one sister is also planning to attend college, so finances are tight. She plans to attend Wellesley College in Massachusetts.

Banks will be the third person in her family of five to attend college despite the hardship of her father being forced to retire as a firefighter captain due to health reasons. She plans to attend Biola University in La Mirada.

Now for the lead we buried in this column. After hearing of these two remarkable students, an anonymous donor has stepped forward to add another $250 to each student’s scholarship. Money well-spent.