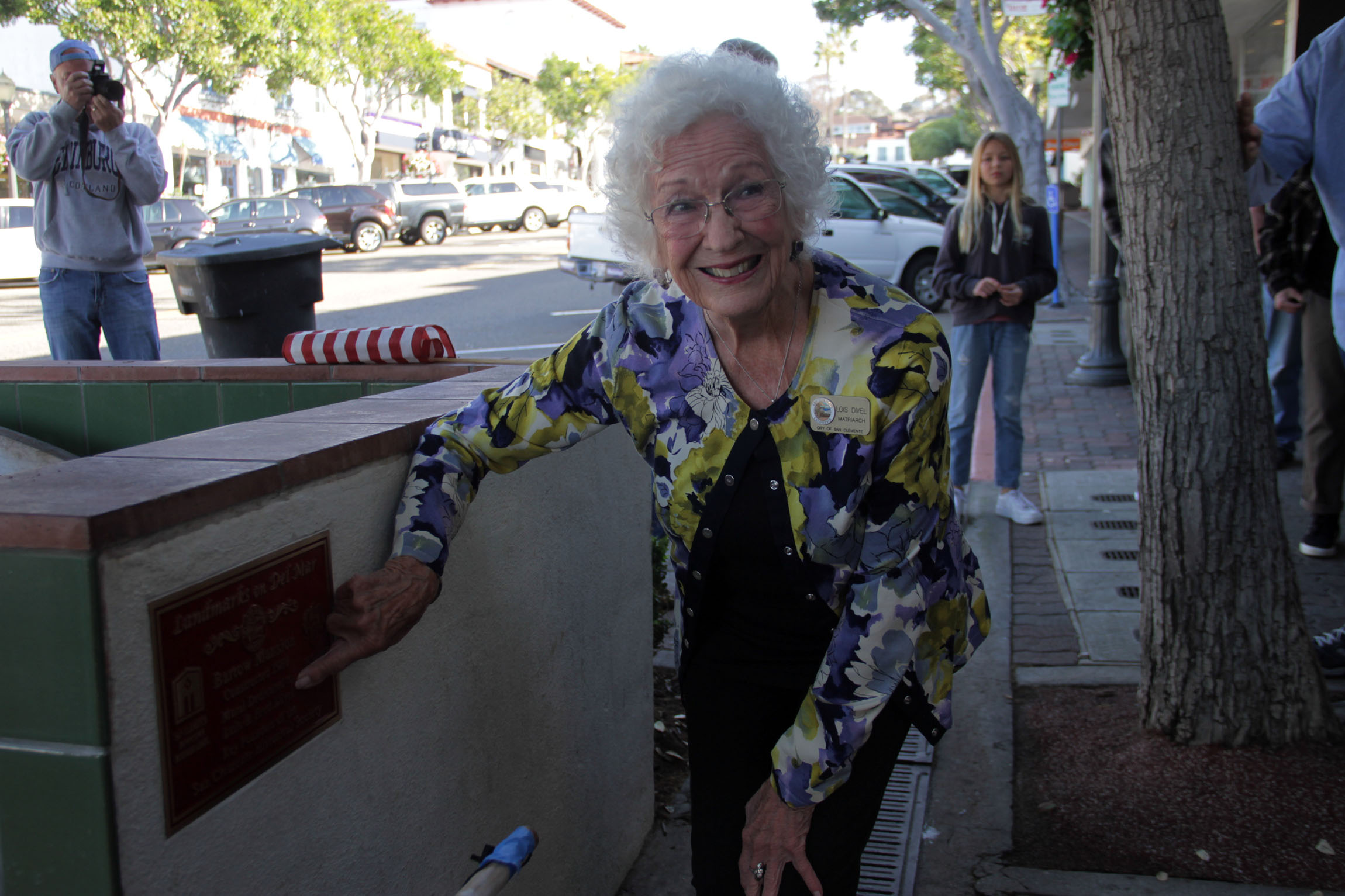 A few dozen people gathered downtown on Monday morning, Feb. 17, to watch as the San Clemente Historical Society surprised the town’s matriarch, Lois Divel, with the unveiling of a plaque dedicated to her and her late son, Fred.

The Historical Society held the special ceremony at the rest area outside of Isabelle’s Cabinet on Avenida Del Mar, where a mural made of tiles features the historic Bartow Mansion. There, the group unveiled a newly installed plaque, recognizing the mother and son as founding members of the organization who led the effort to save the demolished mansion.

Elated after being surprised by the plaque, Lois Divel said she was overwhelmed by the honor and thanked her relatives and the Historical Society for putting the event together.

Rick Divel, Lois’ nephew, also expressed gratitude to the Historical Society, and voiced his appreciation to his aunt and Fred, who died in 2018, for helping start the group in 1973.

The dedication of the Bartow mural had historic significance for the Historical Society, explained group President Larry Culbertson. The mural is one of eight others that can be found downtown as part of the ongoing Landmarks on Del Mar art project.

The initiative led by the Historical Society and the Downtown Business Association since 2009 features tile murals of various San Clemente landmarks. There are to be 14 murals, eight of which have been completed so far, with two more scheduled to be installed this year.

According to Culbertson, the Mansion, which was constructed in 1928 overlooking Trafalgar Canyon and could be seen from the knoll of the Pier Bowl, was unlawfully razed without the proper permits in 1972—at “a time when developers were razing Ole Hanson-era buildings at an alarming rate.”

“As San Clemente citizens were starting to voice concern about the loss of these historic resources, one young man stood out tall from that group—Fred Divel,” Culbertson said. “Fred wrote letters to the editor to rally the preservation movement in San Clemente. Supported by his parents, Don and Lois, many other groups and individuals joined this movement, which resulted in the founding of the Historical Society in 1973.”

For nearly the past 50 years, Culbertson boasted, “the Historical Society has kept the light of preservation in San Clemente,” with Lois, the city’s matriarch since 2006, remaining an active member, along with Fred, until his passing.

“We lost Fred in 2018, but we will always remember what you did for our Spanish Village by the Sea,” Culbertson said.