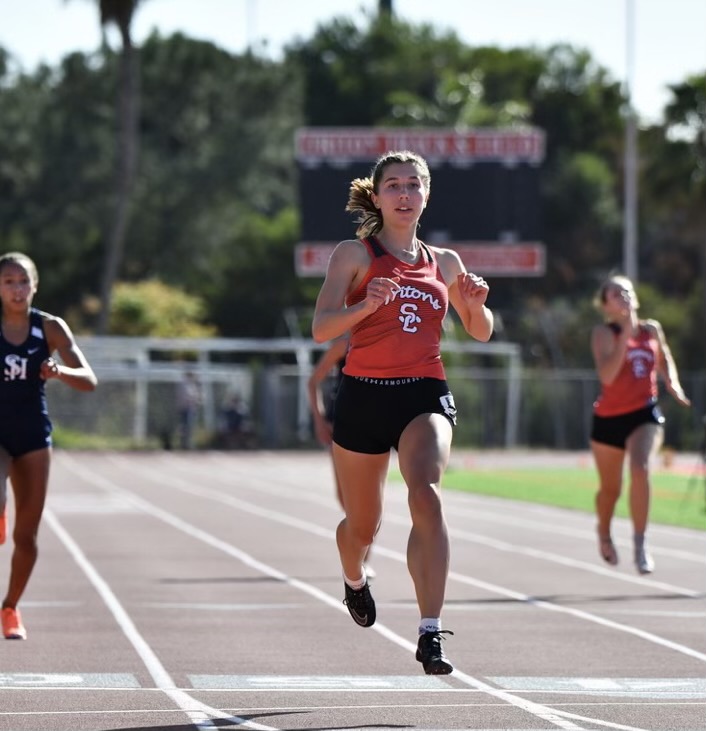 The Tritons’ star on the track was once again senior Caroline Hawkes.

The Montana State-bound sprinter won individual titles with ease in the girls 200- and 400-meter sprints, and Hawkes anchored the 4×100-meter relay team to push the Tritons over the finish line first. The relay team—made up of Hawkes, juniors Danielle Becker and Kyla Brown and sophomore Bella Luzi—captured gold over San Juan Hills by just 0.37 seconds.

Hawkes’ individual win in the 200 was clocked at a blistering 24.41 seconds, which set the San Clemente High School and Coast View Conference records in the sprint. Hawkes ran a slightly faster 24.37-second time at the Mt. SAC Relays on April 16, but the time was wind-aided, so it doesn’t qualify as a legal record.

San Clemente’s other headline-grabber on the boys side was senior pole vaulter Aiden Bennett.

Bennett had been aiming for the school record in the event for some time, but he finally cleared the mark at league finals. Bennett cleared 15 feet, 1 inch for his personal and the school records. Bennett won the event by more than three feet against the marks of junior teammates Joshua Dubay and Curren Beutler. Dubay and Beutler both posted CIF-SS qualifying marks in second and third at 12 feet even, which was a personal record for Dubay.

Schwab took Sea View League titles in both the high jump and 110-meter hurdles. Schwab won the high jump with a clearance of 6 feet, 3 inches, and took the hurdles by just a split second at 15.95 seconds, 0.1 seconds ahead of second place. San Clemente senior Brennan Dougherty also qualified for CIF-SS in the high jump with a mark of 5 feet, 9 inches, in third place. Dougherty picked up his own league title in the triple jump with a personal record of 41 feet, 4 inches.

Several San Clemente runners won league titles as both individuals and as a relay team member.

The San Clemente boys’ other league titles came on the track in the longer races.

The Tritons won the girls team league championship with 89 points, ahead of second-place Tesoro with 72 points and third-place Capistrano Valley with 45 points.