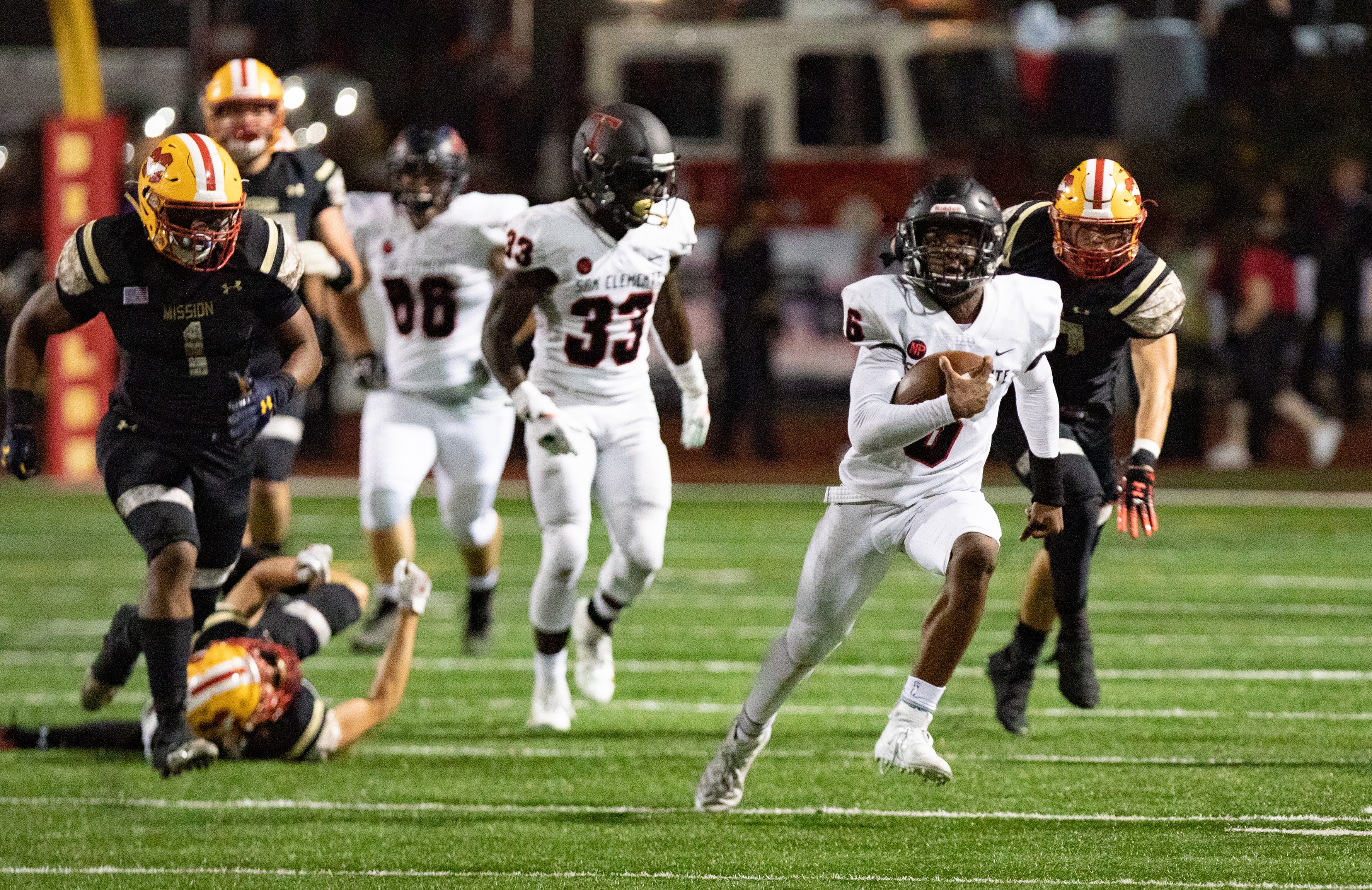 Homing In: SCHS Football Hosts Quarterfinal after First Round Trip

The San Clemente football team’s defense traveled well, as the CIF-SS Division 2 No. 2 seed Tritons soundly aced their first-round road trip and earned the right to host in the quarterfinals.

Bentley Redden racked up 4 ½ sacks, Preston Rex grabbed an interception and San Clemente held Valencia off the board until the final four minutes of the game in a 17-7 win in a Division 2 opener on Nov. 8 at Valencia High School.

Despite some initial disappointment as a top-two seed having to open the playoffs nearly 100 miles away from their home campus, the Tritons (9-2) advanced and will get their home game on Friday, Nov. 15 at 7 p.m. against Rancho Verde of Moreno Valley in the quarterfinals.

Rancho Verde (10-1) survived Serra of Gardena in overtime, 26-20, in their Division 2 opener. The Mustangs played at home last week, which gave San Clemente the automatic home game this week.

Rex’s interception gave the Tritons 33 forced turnovers this season, and Redden vaulted into the team sacks lead with the single best pressure performance of the season. However, the San Clemente defense will have its hands full against Ivy League champion Rancho Verde and will need to bring it all once again.

Rancho Verde may be one of, if not the, most balanced offensive teams that San Clemente has faced this season.

The Mustangs have averaged more than 43 points per game, with 26 touchdowns in the air by sophomore quarterback AJ Duffy and 37 touchdowns on the ground, including 21 by senior running back Jordan Jefferson.

Duffy has completed 71% of his passes for 2,494 yards, with six interceptions. The majority of the passes have been directed to junior Jonah Carnell (53 receptions, 770 yards, eight TDs) and junior Andre McKinney Jr. (43 receptions, 740 yards, nine TDs). That’s been complemented, and more, by Jefferson’s 1,217 yards on 130 carries, including seven games with at least 100 yards rushing.

Jefferson put Rancho Verde over Serra with four carries on a five-play overtime touchdown drive, including the game-winning, four-yard score. Jefferson ran for 102 yards on 29 carries with two touchdowns, while Duffy completed only 9 of 25 passes for 83 yards with an interception, though contributing a rushing TD.

Defensively, Rancho Verde has allowed just under 12 points per game, so San Clemente could be in for some tough sledding on offense. However, the Tritons offense has continued to find ways to get it done.

Against Valencia, San Clemente wasn’t prolific, but Cole Thompson hit a first-quarter field goal, Nick Billoups found Rex for a touchdown pass in the second quarter, and James Bohls put the hammer down with a 70-yard rushing TD in the fourth quarter.

The Tritons’ own balance will be key to keeping the ball out of the hands of Rancho Verde, as the Mustangs also look to play possession football. It’s the game of football in its simplest terms, but San Clemente has to force quick stops on defense and execute long but fruitful drives on offense.

If San Clemente advances, the Tritons will take on the winner of Chaminade-Upland in the semifinals on Nov. 22. San Clemente would host Chaminade, which upset No. 4 seed Norco in the first round, or travel to Upland, the only team to beat Rancho Verde this season.