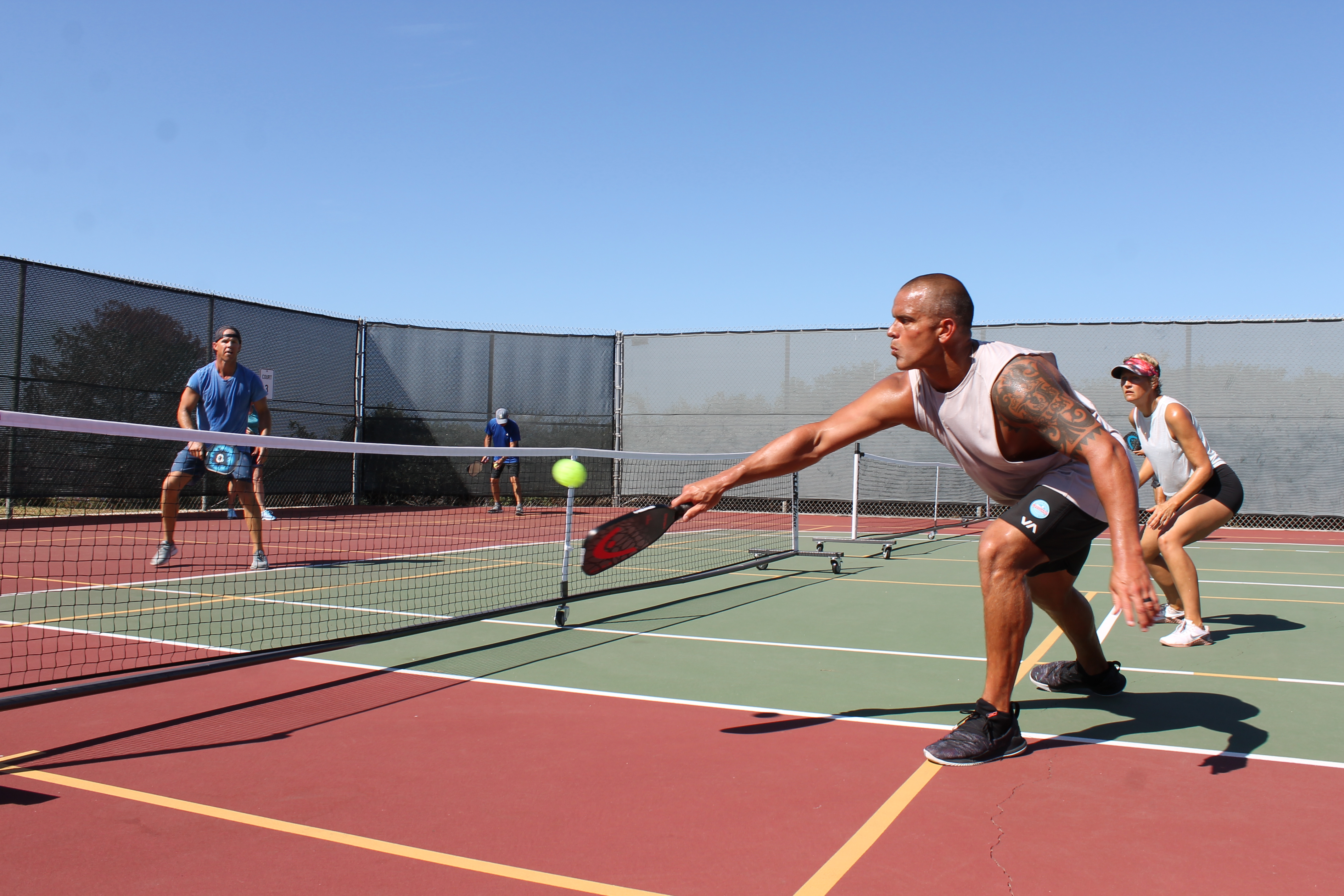 A veritable sea of red-shirts, Pickleball players took the San Clemente City Council meeting by storm Tuesday night, Sept. 3, urging councilmembers to approve an agenda item that would give them more space to play in the city.

Councilmembers voted, 4-0, to consolidate Pickleball courts to San Gorgonio Park, where Pickleball now has eight courts—including four permanent courts and four courts they will have priority on five days out of the week (Mon., Wed., Fri., Sat., Sun.), but share with tennis players on the other two.

“We’re happy that the city is finally recognizing that we need more courts,” said USAPA Pickleball ambassador Marty Weinberg for the city of San Clemente. “Next, we are going to be going for lights.”

Pickleball was invented in 1965 on Bainbridge Island, a short ferry ride from Seattle, Washington. Three dads—Congressman Joel Pritchard, Barney McCallum, and Bill Bell—are credited with creating the game on a drizzly day when their kids were bored and restless with their usual summertime activities.

The kids were given ping-pong paddles and a Wiffle Ball and were told to go play on the family’s badminton court. They were gone so long, the parents went to investigate and found themselves joining in. Out of the experiment, the rules of Pickleball were drawn up and cemented for years to come.

The popular belief is that Pickleball got its name from the Pritchards’ dog named “Pickles,” which was quick to retrieve the family’s balls after errant shots, but not to return them. One of the balls the dog kept was “Pickle’s ball,” and that’s how Pickleball was born, as the story goes.

For the next 20 years, the sport stayed relatively remote to northwest Washington before gaining popularity across the rest of the country.

Weinberg, a retired San Clemente resident, said he first saw a posting for a Pickleball class advertised by the city’s Recreation department around three years ago.

“I had never heard of it,” he said. Weinberg Googled the sport before attending the class in December of 2016, where only about four other people showed up to play.

Flash-forward to today, and Weinberg is speaking to a group of locals at San Clemente Times’ coffee chat about how Pickleball is now all the rage for hundreds of San Clemente residents, and one of the fastest-growing sports in the nation.

In the past two years, the sport has gone from a couple of casual classes at the local Boys and Girls Club to near fistfights with tennis players over courts, to the latest city council meeting dominated by Pickleball players who pleaded with the city to provide them more courts to play on.

Pickleball courts have different lines than tennis, and one court is about four times smaller than a regulation tennis court. Despite there being some six locations to play tennis in town, Pickleball was relegated to only a couple of parks.

Weinberg remembers one time he and a fellow Pickleballer spent more than four hours taping lines to two Pickleball courts, only to find the tape wadded up in a giant ball at the bottom of a trash can the following morning, a blatant rejection by tennis players who claimed the court.

Tennis players then complained to city officials, who told Pickleball players no more taping courts. So they started using chalk to sketch out their courts, which was messy and easily washed out by a chance rain.

“There was a lot of opposition from tennis people,” Weinberg said.

That was about two years ago. The council initially voted down giving Pickleball permanent courts at San Gorgonio Park, according to Weinberg.

About a year ago in October, San Clemente’s Pickleball community started a pilot program to demonstrate to the city that the sport was growing and needed its own space to play.

“The pilot program was to assess if the game was going to stick,” said Betsy Jorgensen, a local resident who plays Pickleball almost every day and promotes the sport in town.

Jorgensen began documenting Pickleball’s daily activity and sending in photographs and videos to the city and BPR Commission.

She said the council’s latest decision was “a huge deal,” and said a big part of the win was getting Pickleball into the city’s master plan.

The pilot program watched San Clemente’s Pickleball community grow from some 30 players to 250.

“At first, it was the baby boomers who were driving the sport,” said Weinberg. About 75% of people who play Pickleball right now are over 55, he said.  “But during the last six months, all of a sudden, we are seeing a transition to where kids are starting to play, young adults and stay-at-home moms and dads.”

San Clemente High School just started its own Pickleball club. On Wednesday, Sept. 4, they held their first meeting and had 26 students. Next, the goal is to make sure the club is outfitted with all the necessary equipment.

A cross between tennis, badminton and ping-pong, Pickleball requires a paddle and a plastic ball similar to a Wiffle Ball, with holes throughout, but more durable. The courts and competition are all ready to go at San Gorgonio Park.

Weinberg said part of the allure of the sport is you don’t need to have a reservation or a partner to play.

“You just show up,” he said. According to a 2018 report by Sports & Fitness Industry Association, Pickleball currently has 3.1 million players in the U.S.—an increase of 12% over the previous year.

Pickleball players will tell you how addicting the game is.

“It’s basically a remedy for boredom,” said Weinberg. “So many seniors say they were stuck at home and had nothing to do. Playing Pickleball is a simple way to get out and enjoy the community.”

A lot of newcomers have no athletic skills, but pick up the game pretty easily after a few matches. Ages of players range from as young as 10 years old to 85. Even some tennis players have converted.

Avid players are so hooked on Pickleball, they will travel with their paddles and play on courts wherever they can. A website called places2play.org allows people to find courts anywhere in the world to play.

With its sea breeze, ocean view and newfound courts, Weinberg sees San Gorgonio Park as the new hub for Pickleball in San Clemente.

“Everyone is just excited to play Pickleball,” he said.

Those who want to learn how to play can come to a Drills and Skills class Monday morning 7-8:30 a.m. at San Gorgonio Park. Beginner and intermediate games are also held Wednesday morning at the park.

USAPA is the governing body for Pickleball. At usapa.org, people can learn about the rules of the game and standards for equipment.

To get started locally, email Marty Weinberg at ih8hiplaces@yahoo.com.