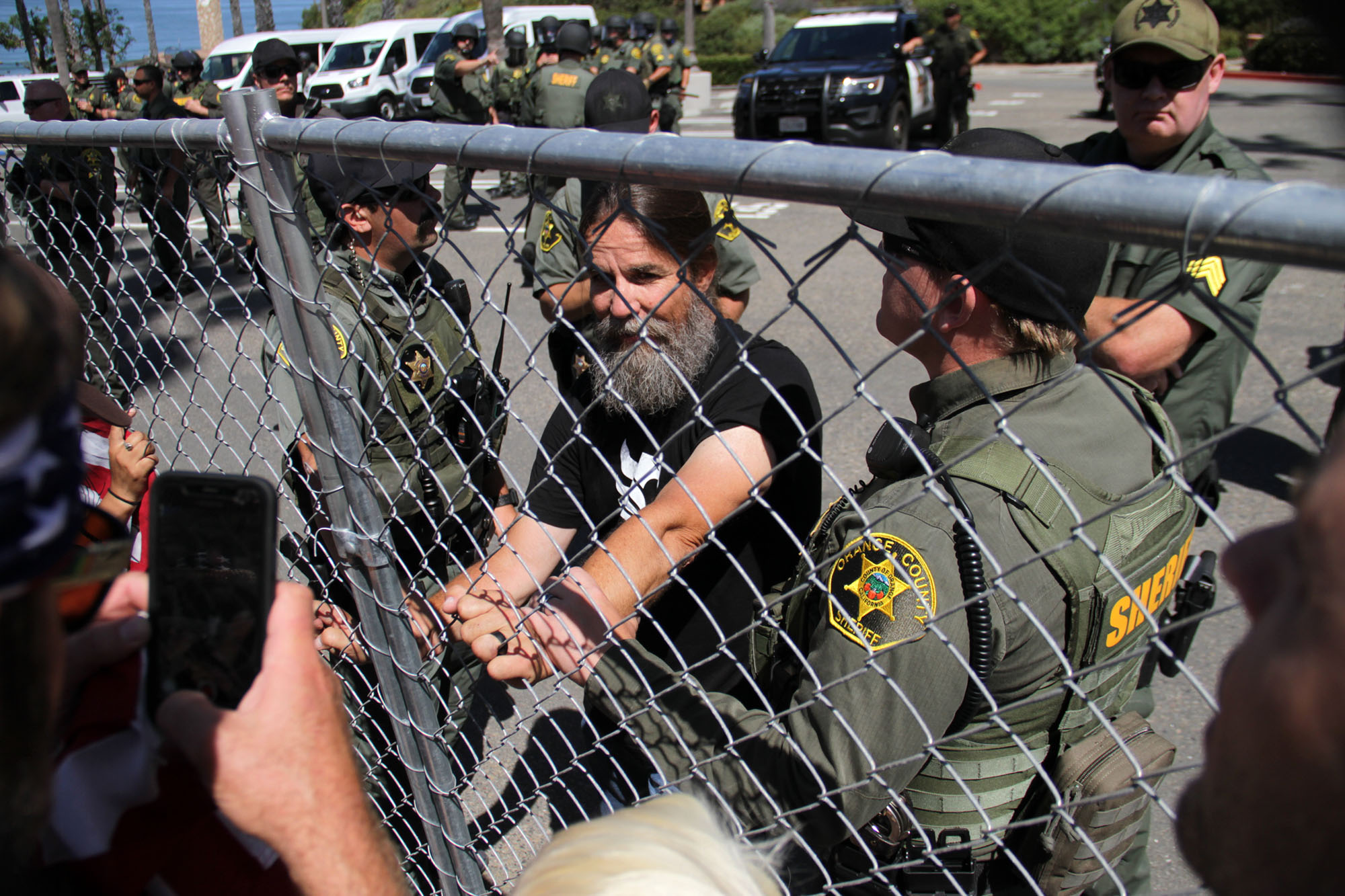 Hostetter, Five Others Indicted on Conspiracy Charge for Capitol Riot

Featured Image: The crowd of protesters video and photograph Alan Hostetter as he clings to a fence during a rally he organized to remove fencing around the Pier Bowl parking lot on May 21, 2020. Photo: Shawn Raymundo

Six men, including San Clemente resident and far-right activist Alan Hostetter, have been hit with a federal conspiracy charge, and each face a series of other offenses in connection to the breach of the U.S. Capitol on Jan. 6.

The 56-year-old Hostetter was arrested Thursday, June 10, on charges that include conspiracy, obstructing an official proceeding, and unlawful entry on a restricted building or grounds, according to the U.S. Justice Department.

Taylor, 40, was indicted on additional charges including obstructing law enforcement and unlawfully possessing a dangerous weapon on Capitol grounds.

Hostetter, a former police chief and yogi, led several anti-lockdown rallies in San Clemente last year through his group the American Phoenix Project. Taylor has aided Hostetter in organizing protests and Stop the Steal rallies, such as one outside the Supreme Court on Jan. 5.

The indictments come months after Hostetter’s San Clemente apartment and Taylor’s Ladera Ranch home were raided by the FBI. Hostetter is already facing charges connected to his arrest at a protest he organized last summer to remove fencing the city had placed around the Pier Bowl parking lot.

Bilal Essayli, Hostetter’s attorney, said the federal charges and indictment brought against Hostetter were troubling, stating that his client didn’t enter “the Capitol building or engage in any acts of violence or had any weapons.”

“He was there to protest and exercise his First Amendment Right,” Essayli continued. “Today, he was charged with multiple felony counts and I think it’s just very troubling as an American citizen.”

Taylor’s attorney, Dyke Huish, said Thursday he and his client intend to enter into a not-guilty plea and “challenge the charges where appropriate.” Huish added that Taylor was not arrested by authorities as he’s been out of town.

“He’s not been arrested at the moment, but he’ll be in court tomorrow,” Huish said. “He’s out of town but we’ll bring him in tomorrow; he just wasn’t here.”

The 20-page grand jury indictment that was made public Thursday alleges that the men, all from California, conspired “to obstruct, influence, and impede” the joint session of Congress on Jan. 6, when lawmakers were certifying the Electoral College votes.

Following the Dec. 19 tweet from former President Trump announcing the protest of the election results in D.C. that would “be wild,” Hostetter and the others began making plans to attend.

“I will be there, bullhorns on fire, to let the swamp dwellers know we will not let them steal our country from us,” Hostetter wrote from his American Phoenix Project Instagram account the same day. “I hope you can join me!”

Using social media and Telegram, an encrypted messaging app, the group of men—some of whom have self-identified as belonging to the Three Percenters militia group—coordinated travel plans to Washington, D.C. and promoted American Phoenix Project rallies.

In the chat, which Taylor titled “The California Patriots-Answer the Call Jan 6,” the men also shared details about “gear” and weapons and firearms they were planning to bring on their cross-country road trips, according to the indictment.

Hostetter, in a text message to Taylor on Dec. 29, explained that he’d be departing for D.C. on Dec. 31, and asked to meet so “you can give me your backpack,” which was followed by three hatchet emojis, the indictment stated.

“Taylor responded, ‘Oh shiz. I need to pack that up. Alan are you bringing firearms?’” the indictment continued to outline. “Hostetter texted back, ‘NO NEVER (Instagram now monitors all text messages … this has been a public service announcement),’ followed by three emojis of faces laughing with tears.”

Taylor, the court filing stated, had also that same day posted to the California Patriots chat on Telegram to state: “I personally want to be on the front steps and be one of the first ones to breach the doors!”

The night before the march on the Capitol, Taylor posted a photo to a separate encrypted chat app, displaying gear he laid out on a bed that included such things as a black plate-carrier vest, two hatchets, a stun baton, and a knife among other things, according to the indictment.

The court filing goes on to allege that on the day of the protest, Hostetter and Taylor, who reportedly was carrying a knife in his front chest pocket, were among a group of rioters who had pushed through a line of police officers on the Lower West Terrace of the Capitol, and had urged others to follow.

“Taylor, followed closely by Hostetter, then pushed through the area that the law enforcement officers had been blocking, moved up the stairs onto a structure erected for the Inauguration, and continued moving to the Upper West Terrace,” the indictment stated.

Later that evening, the indictment added, Taylor sent out texts stating that he “stormed the capital (sic).” He also said in the text that he didn’t go inside the building because he “had weapons.”

“When asked by one of the individuals with whom he was texting what happens next, Taylor responded, ‘Insurrection!’” the indictment continued.

FBI spokesperson Laura Eimiller explained that Hostetter had his initial appearance in federal court in Orange County on Thursday. Three of the others also had court hearings in Riverside, and the fifth had a court hearing in Texas, she said.

According to Essayli, the judge released Hostetter on a $20,000 signature bond with minimal conditions, such as surrendering his passport and abiding by all court orders.

Hostetter, his attorney added, is scheduled to appear back in court on Monday, June 14, for his arraignment, at which time he’ll enter a not-guilty plea.