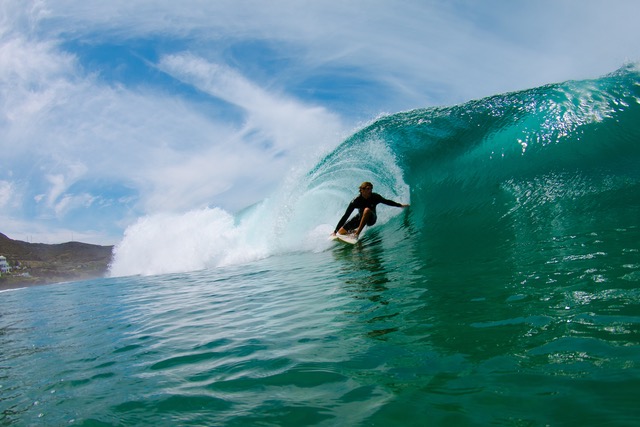 How to Surf Better

When chasing surf dreams, a good coach can make a huge difference

For generations, prodigious talent from San Clemente and Dana Point has grown up ripping our local beaches. As they got older and stronger and their skills in the water blossomed, they’d go marching off to foreign shores to prove themselves against the world’s best surfers.

In the ’80s, the movement was led by the likes of Dino Andino, Christian Fletcher and Matt Archbold at T-Street. In the ’90s, it was Pat O’Connell and the Salt Crew. And as we slid into the new millennium, a whole host of fresh-faced new talent abounded with the Long brothers, Nate Yeomans, and the Gudauskas boys fronting the charge.

Today, the talent pool is as deep as it’s ever been at spots such as Trestles and Salt Creek. This area has become the hotbed for up-and-coming surf talent in the U.S. And as young groms look to improve, the older, more experienced surfers are stepping up with an opportunity to share their expertise through coaching and mentoring.

“I want to inspire people to realize that they are capable of achieving things that they didn’t think was possible,” says Brandon Phillips, who is an assistant coach of the United States National Surf Team, as well as the founder of Vert Performance.

“I’ve been the athlete. I’ve gone through injuries, enjoyed success and experienced failure,” Phillips said. “I’ve had good mentors and bad influences. What moved me to go all in with Vert Performance was when I was doing marketing for the brand Etnies. I would be gone on trips, come home and surf and see kids coming up. Every time I left and came home, I felt like there were more kids in the water and progressing quickly.”

Phillips takes a more holistic approach with his coaching, aware of the fact that it’s not just how good somebody is with a surfboard under their feet but also how strong they are in their mind. There are a lot of people who can ride a surfboard well, but it’s often the mental side of the sport that’s the difference maker in the heat of competition or when the waves are really pumping.

“To be better today than you were yesterday, that’s the goal,” Phillips said. “If someone comes through Vert and feels more confident and has a greater self-worth, the job is accomplished.

“I like to tell my students to focus on what you can control. Let go of all the uncontrollable factors and focusing on what’s within your control is critical. It’s also important to stop comparing yourself to others in the water. If you are measuring your progress based off others’ ability, it’s only setting you back. Keep moving forward, onward and upward.”

Besides young surfers developing mental fortitude, there are concrete steps they can take to improve. From the equipment they ride to the activities they do when they’re not in the water, it all makes a difference.

“I think getting on the right boards and surfing spots that match your ability is pretty critical. The goal to building skill is to catch waves. The more waves you catch, the more you practice the technical stuff and the more you progress,” Phillips said. “A lot of people get hung up on a certain style of board or surfing a certain spot. Look for the uncrowded spots to give you room to focus and apply the coaching.”

Skateboarding is another big part of Phillips’ and Vert Performance’s program. Street skating was originally created by surfers looking to go “sidewalk surfing.”

“Skating offers the ability to repeatedly practice a trick, technique or whatever it may be until they get it,” Phillips said. “Waves are unpredictable, and the consistency of the skatepark provides what the ocean doesn’t. Plus, you can tuck into a tree branch barrel any time of day!”

At the end of the day, a good surf coach understands that there’s a wider world out of the water, and success in the surf can translate to success in life.

“I’m here to be a mentor and a teacher. I’m here to encourage and build up people of all abilities to succeed in and out of the water. It’s bigger than surfing,” Phillips said.

For those looking to dive in a little deeper and get serious about their surfing, Phillips and his crew at Vert are happy to share what they’re doing with the community.

“We have a youth group every Friday night at 6:30 p.m. at Calvary Chapel San Clemente,” said Phillips. “It’s a safe place for kids and parents to hang out, skate, eat food and grow their faith in God. It’s always open to anyone who wants to cruise.”