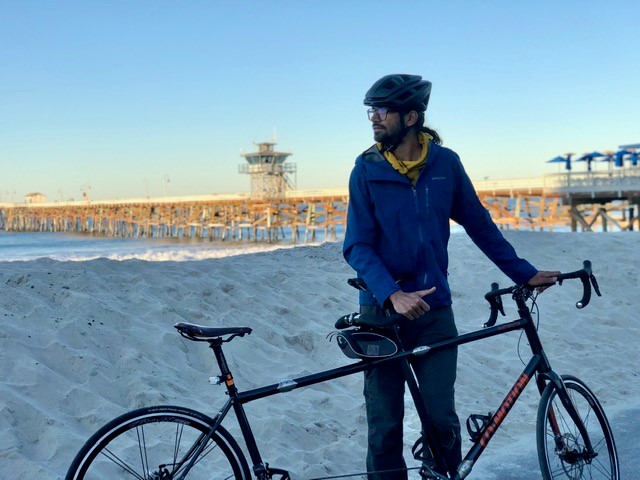 This past May, Kumar completed his ride, traveling on a tandem bicycle across two continents for about 5,400 miles from Chennai, India to Hamburg, Germany. Along the 87-day journey, he picked up nearly 200 strangers to pedal with him and assist with his goal of ending slavery.

The bike ride was meant to both raise awareness and funds to combat human trafficking and child abuse, Kumar’s gofundme page states. According to the site, he raised $12,513 toward his goal of $20,000, which will benefit organizations that work to rescue, rehabilitate and empower victims of human trafficking.

After completing the bike ride, Kumar spoke at the International Rotary Convention in Hamburg, where he linked up with Dave McCleary, the vice chair of the Rotary Action Group Against Slavery (RAGAS).

Upon learning that Kumar was recently in Northern California, the local Rotarian group invited him to San Clemente.

“San Clemente Sunrise Rotary flew him to San Clemente to meet the community at a couple fireside chats (Cafe Calypso and Zebra Coffee House) where he shared stories of the humanity he encountered along his recent expedition,” Sally Guon, Sunrise Rotary member, said in a press release. “His magnetic personality left his audience captivated and asking ‘how can I help’ wage this war on modern-day slavery?”

Kumar has participated in similar excursions, either cycling thousands of miles or running hundreds of miles, all with the goal of raising awareness and funds for the cause. His next adventure will take him across the U.S., as next spring he intends to again ride a tandem bicycle and pick up strangers.

“We are very excited and look forward when Naresh returns to California, as he begins his next expedition in April,” Guon said in the release.

According to Guon, Kumar will end the trip in Atlanta. While there, he’ll reconnect with McCleary before joining with the other Rotarians at the Rotary International 2020 in Honolulu.