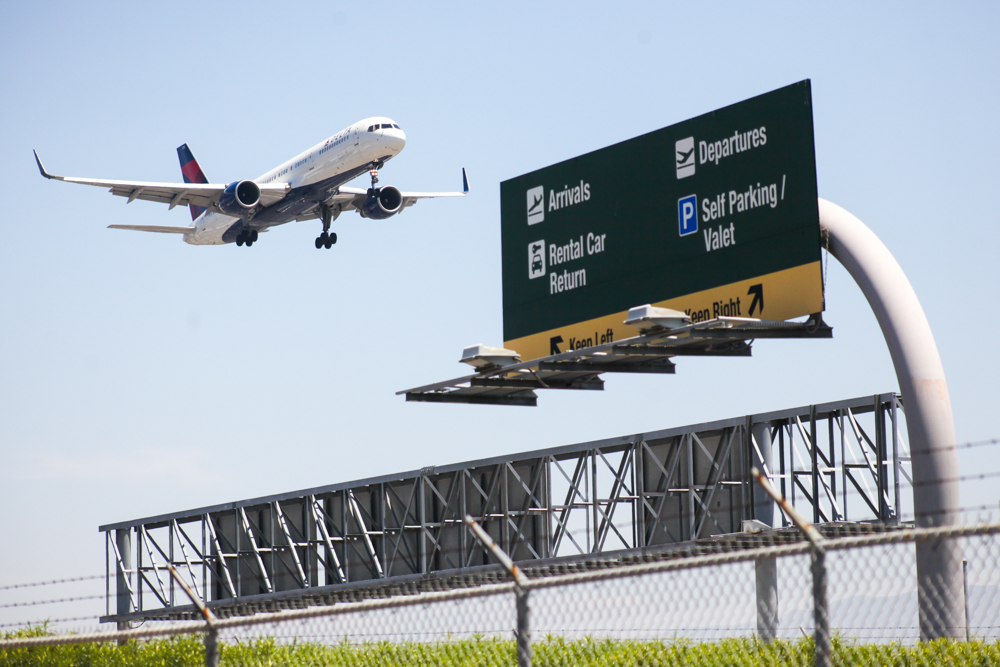 Hundreds Gather to Discuss Life ‘Under the Flight Path’

More than 500 concerned South Orange County residents crowded into Laguna Niguel City Hall on May 15 to voice their concerns and hear what Orange County supervisors and John Wayne Airport staff had to say about the recent flight path changes and increase in aviation noise over South County.

The two-hour forum also included a question-and-answer portion, where members of the panel answered questions submitted by those in attendance.

The FAA is currently in the process of implementing its Next Generation Air Transportation System and Southern California Metroplex project, which utilize a GPS and satellite-based system that has changed flight plans and altitudes of air traffic across the nation. The change to a satellite-based system was called for by Congress back in 2003 in an effort to improve the safety and efficiency of flights.

But the flight path changes to and from John Wayne Airport have become a source of stress for some South Orange County residents who say the air traffic has become much noisier and is negatively impacting their quality of life.

The cities of Laguna Beach and Newport Beach have sued the FAA over the NextGen flight changes, claiming that the FAA’s review of the possible environmental impacts to the surrounding area was insufficient. (The FAA found that there would be “no significant impact” from the flight changes). The Orange County Board of Supervisors voted unanimously to join the city of Newport Beach’s suit against the FAA.

A grassroots advocacy group called Citizens for No Plane Noise recently presented information at a San Juan Capistrano City Council meeting, presenting data that shows a significant increase in commercial jets flying at 4,000 to 6,000 feet altitude over land from 2016 to 2017. Residents from San Juan, San Clemente, Dana Point and Laguna Niguel have reported experiencing increased airplane noise over their homes as early as 3:15 a.m. and as late as midnight, due to cross-traffic from San Diego and Los Angeles.

The San Juan City Council voted on May 16 to send a complaint about the increased airplane noise to the FAA. Mayor Kerry Ferguson also noted that she is working with area officials to schedule a similar town hall meeting in San Juan.

Bartlett told the packed auditorium on May 15 that she recently traveled to Washington, D.C. to meet with Orange County’s congressional delegation, as well as FAA officials in order to relay the concerns of South County residents. Bartlett called the meeting “very successful,” saying that the main issue seems to be airplanes taking an early turn, which causes the flights to fly over land at a lower altitude than before. Bartlett also acknowledged that cross-traffic is an issue from San Diego, Los Angeles and Long Beach and from private aircraft.

Bartlett asked FAA officials if it would be possible to direct air control not to allow early turns unless they’re for safety purposes. She said they agreed to look into it, saying it was “probably” doable.

“That would be a huge difference for all of us,” Bartlett said.

Supervisor Spitzer said he believes that airlines are having planes fly lower to save fuel and time.

“If you lived in those communities along the departure corridor from John Wayne, you would be angry, too,” Spitzer said. “You would not want that in your community, and they deserve to be protected.

“We are not going to tolerate time savings and fuel savings at the cost of our communities,” he added.

“The fix to this whole problem is actually very simple, but it’s a matter of keeping vocal—they need to know that we’re really serious down here in South Orange County,” Bartlett concluded.

For information on the FAA’s NextGen program, visit www.faa.gov/nextgen.

Residents can also contact the FAA’s aviation noise ombudsman directly by sending an email to 9-awa-noiseombudsman@faa.gov or by calling the FAA’s complaint department at 202.267.3521.