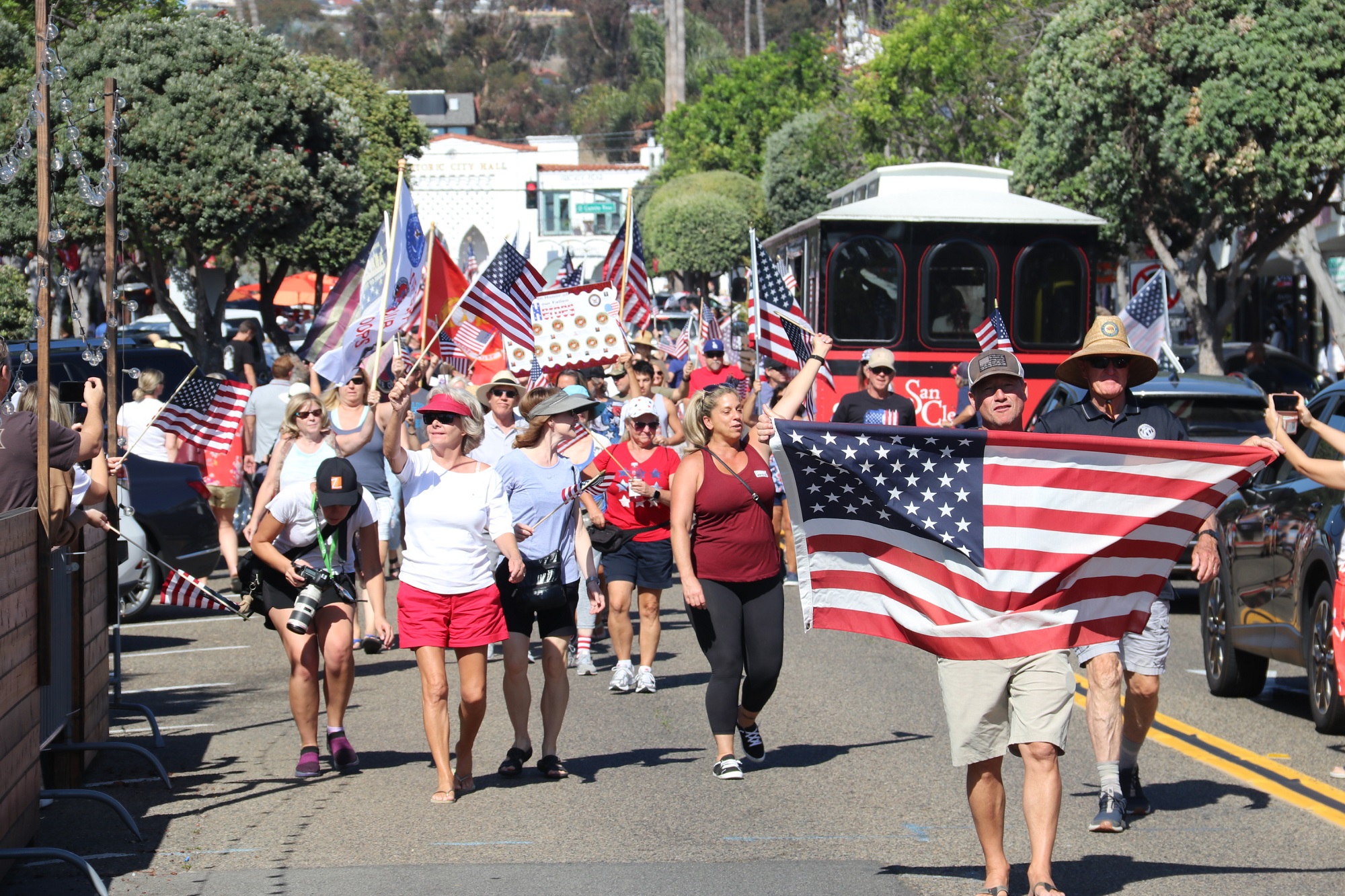 Hundreds Gather to Honor the 13 Marines Killed in Afghanistan

Photos and Text by Lillian Boyd

Hundreds of demonstrators gathered at the intersection of Avenida Del Mar and El Camino on Sunday afternoon, Sept. 5, to participate in a memorial march honoring the servicemembers who died in last month’s terrorist attack in Afghanistan.

Ten U.S. troops deployed from Camp Pendleton were among the 13 servicemen and servicewomen who died in the Aug. 26 suicide bombing that also injured 18 other U.S. troops and killed more than160 Afghan civilians.

The nine Marines and one Navy Corpsman were part of Camp Pendleton’s 2nd Battalion, 1st Marine Regiment, and had been securing the Abbey Gate at the Hamid Karzai International Airport the morning of the deadly terrorist attack.

At around 4 p.m. this past Sunday, the crowd—donning patriotic signs and clothing—marched down Del Mar, toward the Marine Monument at Park Semper Fi within the Pier Bowl.

Julie Ragenovich, a San Clemente resident and owner of Sonny’s Pizza & Pasta, says she felt that the community needed to come together to honor the lives lost in the attack.

“San Clemente is a military town. As a community, we need to rise up and support all our (servicemembers) and especially the fallen 13 that will not return,” Ragenovich said. “Seeing the amount of people coming out for this … brings tears to my eyes.”

Once the demonstrators arrived at Park Semper Fi, they gathered around the Marine Memorial where Pastor Jim Glynn, a retired Marine who had served in the 2nd Battalion, 1st Marine Regiment from 1976 to 1979, spoke to the crowd.

“It would be wrong to only focus on the lives lost in August,” Glynn said. “Since Sept. 11, 2001, 2,448 servicemembers have made the ultimate sacrifice in Afghanistan.”

Additionally, 7,050 servicemembers have lost their lives during the military operations since the Sept. 11 terrorist attacks. According to a new report on military deaths published by Brown University’s Watson Institute of International Affairs, in the years since 9/11, more than 30,000 active duty personnel have ended their lives.

“That number makes what we are doing here today even more vital because by being here and standing together we are reaffirming our love, gratitude and support for all those veterans who have served our country in the United States military,” Glynn said.

“If you are a veteran, we want you to know that now more than ever we stand with you and beside you today and the days to come,” he continued. “We want you to know you are not alone and we believe in the sacrifice you made on behalf of your fellow Americans.”

After the event, Jay Bellamy, a San Clemente sand sculptor, honored the fallen by creating sand emblems of the Marine Corps, Army and Navy near the pier.