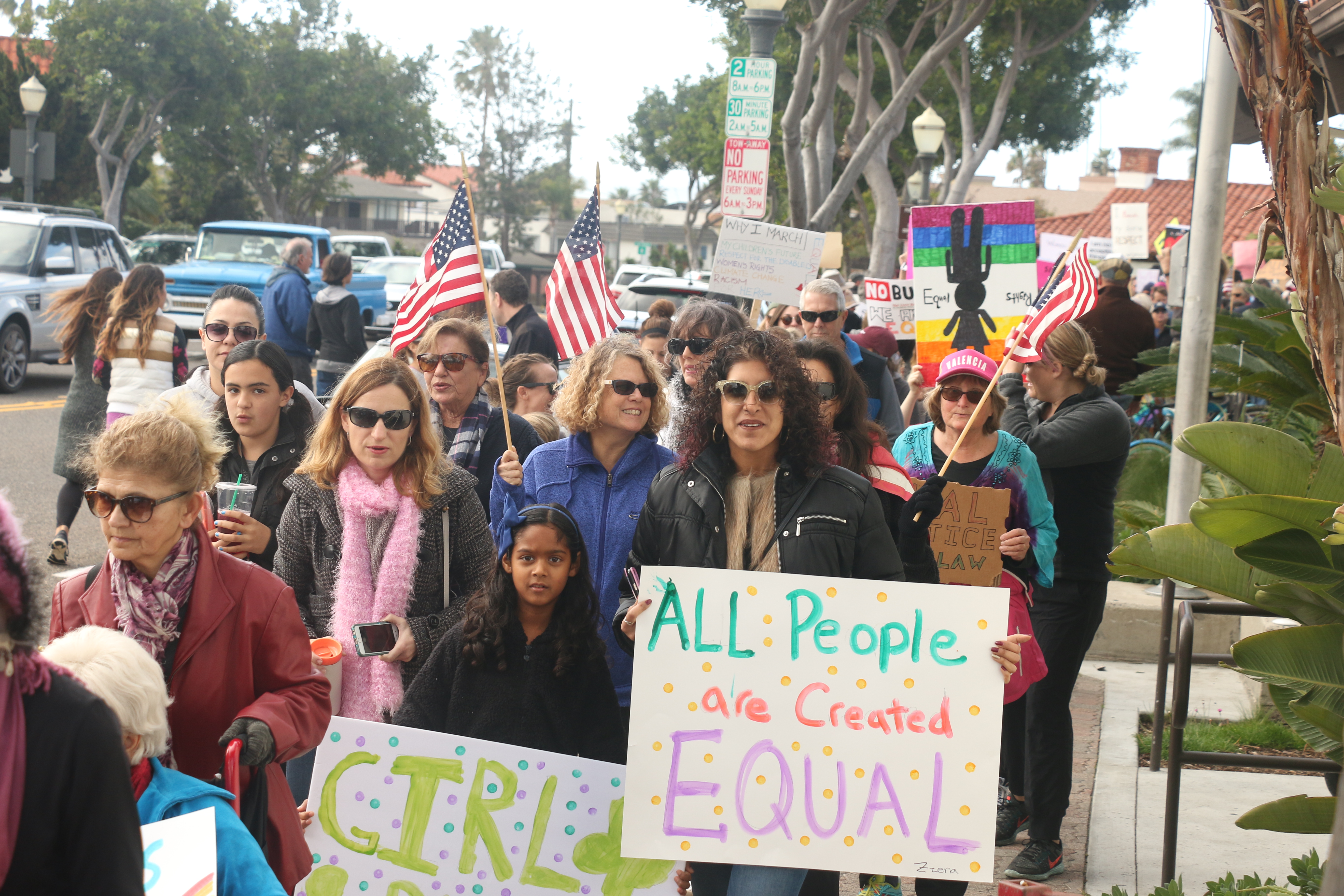 Pink hats dominated the front lawn of the San Clemente Community Center on Saturday morning, Jan. 21, as hundreds of people gathered to participate in a “sister march” in solidarity with the Women’s March on Washington.

The crowd marched from the San Clemente Community Center, eastbound up to El Camino Real and then back down the other side of Avenida Del Mar to where they started.

The marches, which took place across the nation last weekend, were largely intended to make a statement to President Donald Trump and his administration: that millions will stand up to defend equal rights for women and social and racial minorities, which many of the marchers felt could be threatened under the new president’s administration.

According to the Women’s March on Washington website, the march was also intended to be a peaceful statement against what supporters said has been a derogatory tone from all politicians during the presidential election.

For Christine Preciado, who attended Saturday’s march, the infamous video and sound clips published by The Washington Post featuring Trump describing sexual advances on women was the last straw.

“The ‘locker room talk’ shouldn’t be acceptable, and I understand it happens, but that doesn’t mean it should, and we as women need to step up and show that we’re not OK with it,” Preciado said. “Even though it’s your right to say that, it shouldn’t be the president’s words.”

The night before the march, more than a dozen people came to Fired Up, an educational art studio in San Clemente, to make signs. One of the participants was Luci Romina, a U.S. citizen who emigrated from Argentina.

“I’m very proud to be both Americans, both south and north,” Romina said. “I love this country, and I think what we try to stand for is very great, but right now, the president we have has inherited the leadership of a nation of nations, and he doesn’t seem to want or accept that.”

Then, early Saturday morning, about 100 people gathered at the Outlets at San Clemente to take charter buses to march in Santa Ana.

One couple, David Gollom and Stephanie Rothschild, put on their own pink hats just before getting on their way to Santa Ana. The two said they wanted to be part of something that voiced their opinion in such a way that would draw the attention of the new Commander-in-Chief and representatives in the U.S. Legislature.

“I hope they realize there’s a lot of people who care,” Rothschild said. “I’m not coming here as a protester. I’m here to bring a positive (message) about what we want. I’m not about bashing anybody, but I want to make sure that everybody’s rights are received and considered.”

Gollom said he was traveling to the march in Santa Ana because he wanted to show his support as well.

“Women should be treated with respect, not like objects,” Gollom said. “I think Donald Trump has brought a very old attitude toward women, coming from the 1960s and ’70s, and it’s not right.”

About 2,275 miles away, as the crow flies, Mollie Bennell-Lazarus, president of the San Clemente Area Republican Women, Federated, attended the presidential inauguration in Washington, D.C. with her son, Charlie.

Bennell-Lazarus said she was also in D.C. during the marches on Saturday. She said she viewed the marches as a bit disconnected.

“I have to say, it seemed a bit chaotic, as the messages were a mish-mash and did not have a clear presentation,” Bennell-Lazarus said. “I could understand some of the issues, but a lot of the presentations were vulgar and unnecessary for the things they were trying to do.”

One of the main concerns from marchers regarding women’s rights is the uncertain outlook for federal and state abortion laws. As the Republican-controlled Senate will likely confirm Trump’s Supreme Court justice nomination, many said access to such services will be restricted, at the very least.

Prior to Saturday’s events, the Women’s March on Washington organization issued a statement on Twitter denouncing involvement with one of its sponsors, a pro-life organization, and removed them from partnership.

“It was unfortunate (pro-life groups) were banned when their message is an inclusive message, and that is all humans have value, and we were there to march try to say, ‘Yes, women have value and have been denied that right before,’” Gruber said.

On Tuesday, Trump signed a presidential memorandum reinstating a block on any funding to programs in other countries that provide abortion services and “involuntary sterilization.”

Tias Hoffman, who organized the San Clemente march, said she wanted to put the event together last week when she realized one had not been planned. Hoffman began circulating the idea through friends and social media posts.

Hoffman said the things that concern her most were women’s rights, pay equality and parity. But she said the march itself was also intended to celebrate peace.

“We just want to have fun today,” Hoffman said.

As more people gathered at the Community Center, signs demanding protection of women’s rights and rights of all people were abundant.

Kristin Dunning, who attended the march, said she wants to see more understanding among one another, regardless of political affiliations.

“I think the most important thing about today is the fact we are together as a people,” Dunning said. “Even if we’re divisive in politics, we still want to support and love each other. The president doesn’t give us that power; we give ourselves that power.”

Gollom said he is taking a Groundhog Day approach to anticipating the aftermath of the march, waiting to see what would be in the shadow of the president’s favorite social media outlet.

“One of the things I’m most curious about after this march or even during it is to see what Trump’s tweet is,” Gollom said. “I think that will tell a lot. If he reacts the way he typically does, then I think we’re in for four years of it. If he realizes it, now as president of the United States, and has a different measure in tone, maybe he’ll normalize a little more to what people expect from a president, but my gut tells me we’re in for four more years.”

On Sunday, Trump responded to the marches.

Watched protests yesterday but was under the impression that we just had an election! Why didn’t these people vote? Celebs hurt cause badly.

Peaceful protests are a hallmark of our democracy. Even if I don’t always agree, I recognize the rights of people to express their views.

Bennell-Lazarus said the people who participated in the marches, in addition to needing to convey a clear message, should direct efforts toward helping women in other countries that give fewer rights to them.

“I think women here have pretty good treatment and are on par with men,” Bennell-Lazarus said. “Women should look beyond our shores, and they need to help the women in countries where they are truly treated as second-class citizens… can’t drive, work and access education at all. I find that so sad and appalling.”

Bennell-Lazarus said she thinks everyone who participated in Friday’s and Saturday’s events accomplished what they wanted.

“My personal feeling is if you went to Washington, D.C., for the inauguration, you left happy, and if you went there to do the march, you were happy,” she said.

The Women’s March on Washington is now rolling out its 10 Things in 100 Days initiative in which they will execute 10 actions within Trump’s first 100 days in office. The first action features women’s rights supporters writing to their representatives.

People get on a bus on Saturday, Jan. 21, to head to Santa Ana's Women's March on Washington. Photo: Eric Heinz

David Gollom waits for the buses to Santa Ana while his wife, Stephanie Rothschild, places a pink hat on his head. The hats were made as a symbol of marchers' unity in Saturday's Women's March on Washington "sister march." Photo: Eric Heinz

Luci Romina makes an equality sign on Friday, Jan. 20, prior to the Women's March on Washington. Romina, originally from Argentina, became a U.S. citizen in 2005. Photo: Eric Heinz

Stephanie Howell makes a sign that reads "Females are Strong as Hell" at Fired Up in San Clemente prior to the Women's March on Washington sister march in San Clemente. Photo: Eric Heinz

Robin Lorenz makes a peace sign on Friday, Jan. 20, at Fired Up in San Clemente prior to the Women's March on Washington "sister march." Photo: Eric Heinz

Article updated 9 a.m. Sunday, Jan. 22, to include tweets from Trump.

Article updated at 2:30 p.m. on Wednesday, Jan. 25, to include more quotes from Bennell-Lazarus and Gruber.