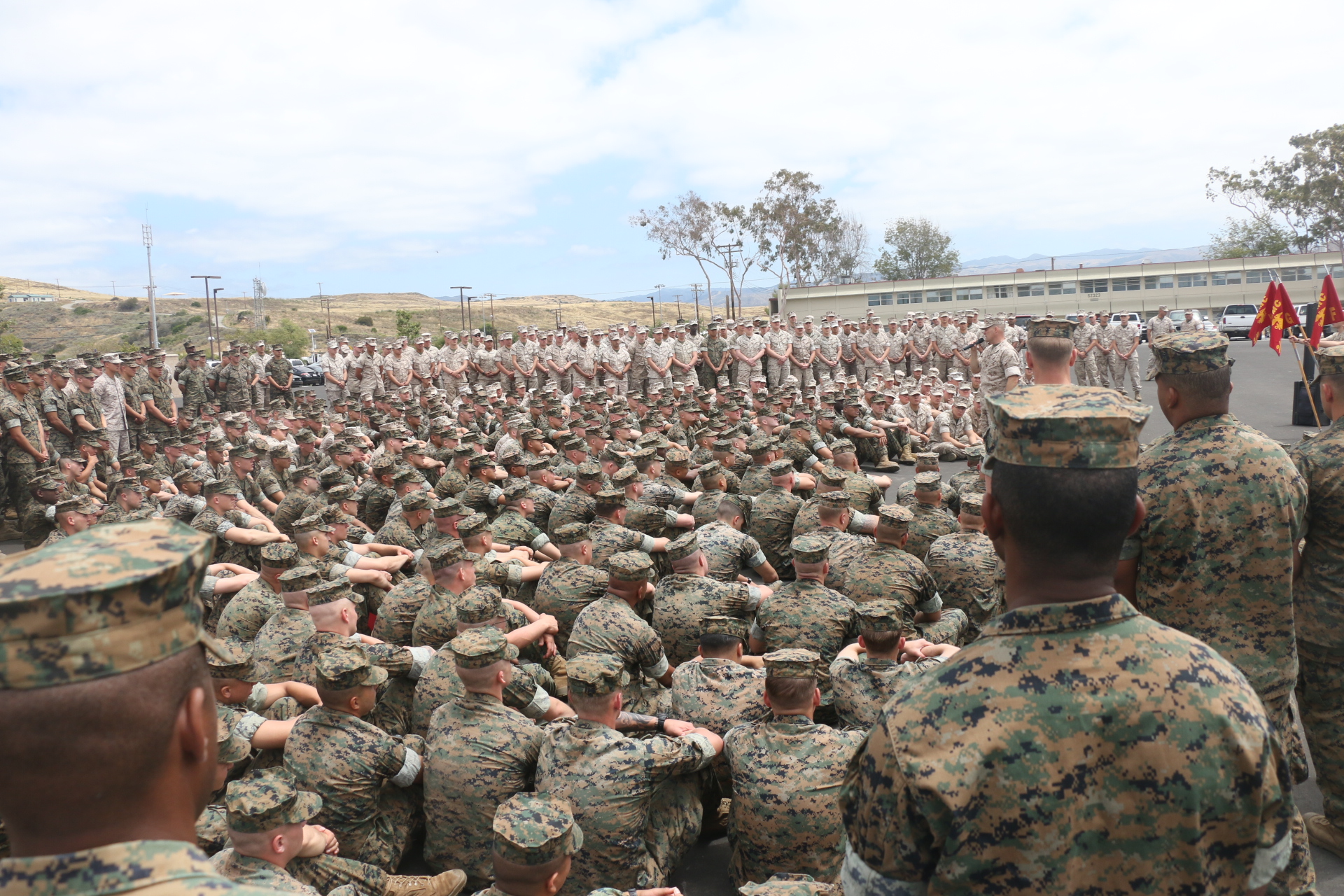 Into the Jungle: 2/4 Marines to Train in Okinawa, Japan, for Next Six Months

One of San Clemente’s adopted U.S. Marine Corps battalions is shipping out to Okinawa, Japan. The deployment began Tuesday night and more troops will head out in the next couple weeks.

In Japan, the 2nd Battalion, 4th Marines (2/4) deployment will include a variety of combat training and will focus on higher-level work.

Some of the Marines of the 2/4 left Tuesday night following a gathering with Major Gen. Daniel O’Donohue, who took over as commanding officer of the 1st Marines Division in September.

Capt. Frank Anderson of the 2/4 will be going on his fourth deployment.

“Going into the jungle is much different; jungle warfare is very, very different from all aspects of war-fighting functions,” Anderson said. “Whether it be intelligence or logistics or fire, it’s very different. So we’re going to take a good chunk of time in the jungle. This will help us build that cohesion and prepare us to go wherever we’re needed.”

Being prepared when called upon at a moment’s notice is what Anderson said defines the 2/4.

“We can do a broad range of different things,” Anderson said. “For example, my last deployment, the big tsunami occurred in northeastern Japan. That was very different, going up against the struggles of dealing with a massive crisis like that.”

Second Lt. Brendan Adams is the platoon commander for Fox Company in the 2/4. Adams has been a Marine for about two years, but being deployed to Okinawa for six months will be his first full-length overseas training.

He said he joined the Marines because of a sense of loyalty to his country.

“I just wanted to serve the country the best way that I know how to,” Adams said. “The infantry was the right answer for me. My older brother was in the infantry as well, so I got a lot of influence from him. We’ve been building up for this with a lot of training. It’s exciting, and we’ll see what happens.”

Adams said he went for a quick trip to Southeast Asia with a Marine unit, but he wasn’t there for a full deployment.

“A lot of my guys are new, and I know it will bring a challenge to the younger Marines for sure,” Adams said. “The jungle can present a lot of challenges.”

Corpsman Luke Campbell, a hospital medic third class with the U.S. Navy, will be joining the training as well. Campbell said the biggest thing he worries about is soldiers expiring from the high temperatures in the jungle, where humidity can sneak up on people, especially when they are fully clothed and carrying large amounts of equipment.

“My top responsibility and my company’s top responsibility is the health and wellness of our Marines, and heat casualties are a big thing I’m thinking of right off the bat before we even get there,” Campbell said. “I’m not nervous, but I’m wary about making sure all my Marines are educated about proper hydration and even the wildlife. There’s just all kinds of things that are going through my head from a medical perspective.”

Campbell comes from a Navy family; both his brother and sister are currently serving.

“I joined the Navy to serve my country as well as travel, and the Navy provides a lot of opportunities down the road,” Campbell said. “I’m really excited about the deployment, and I’ve never been anywhere around Okinawa. Just excited to see the culture, interact with the people, and all the training.”

Campbell has been with the company for two months and is still getting to know everyone in his company. Originally from Boston, Campbell said he’s just “pumped” to experience something completely different.

“I’m just trying to get to know my company and work with everybody,” Campbell said. “We’re going to be in the jungle, so that’s going to be completely different than the desert and the mountains.”

Lance Cpl. Kenneth Cordova, a rifleman, has been in the Marines for two years. He is originally from Minnesota.

“I joined because the Marine Corps embodied a lot of my beliefs at the time,” Cordova said. “And I also joined because of the brotherhood and everything we’ve experienced.”

Cordova said he is eager to put his practice to the test.

“I’m looking forward to putting that training to actual work,” Cordova said. “I came as a new guy 10 months ago, and now we’re building more on skills needed for the deployment, and I can’t wait to put it into practice.”

Cordova said for most of the deployment, he and his company will train for three or four weeks and then have weekends off. Spending six months together in a foreign country, he said, will bring everyone closer together.

“It’ll be good to be able to interact with everyone on a more personal level,” Cordova said.

Cordova said he’s interested in learning the local culture while he’s deployed, but being away from family isn’t necessarily something he’s eager about.

“It’s just kind of something that you get used to,” he said.

Anderson said the mental part of the deployment and the training are the biggest hurdles for Marines being deployed for the first time.

“It’s more of a mental challenge; it’s more of the uncertainty of it,” Anderson said. “The Marines and our Corpsmen are very well prepared for not knowing what the future holds. That’s why we train to prepare for various mission sets.”