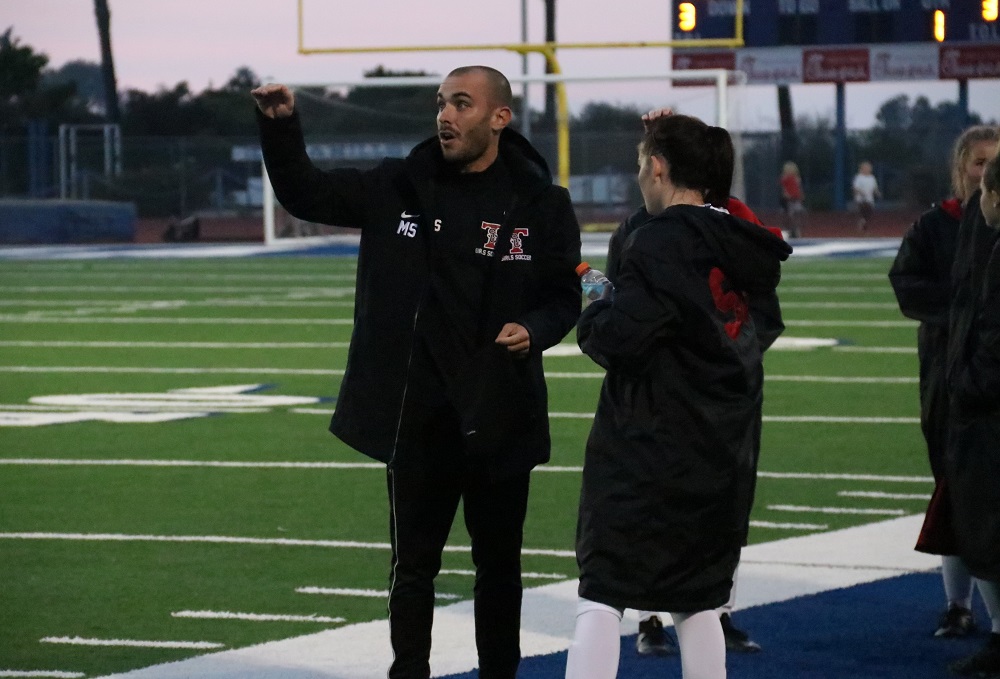 “I absolutely love it,” Spaccini said of coaching San Clemente. “As a coach, that’s (the passion is) my strength and my weakness. I bring my job home, and I think about it too much. But we’re all full on board with everything we’re doing.”

It also shows why the players campaigned for the former assistant coach when the head position became available this past summer.

Spaccini, who only joined the program as an assistant last season, was the popular choice among the players and was hired as head coach in October.

“I will always be grateful to them,” Spaccini said of the players. “They really pushed hard; they were hoping for me to get the position. I love what they did for me, and I’m trying to give back to them and the entire program.”

Spaccini grew up with soccer in his native Italy. Spaccini said he played professionally and semi-professionally before moving to Chicago in 2015, where he said he hadn’t known how big soccer had become in the United States.

Spaccini had some experience coaching youth teams in Italy but got more into coaching in Chicago with a club team and an internship with the Loyola University men’s soccer team. Spaccini moved to California in 2017 and took a full-time job as the head coach at the California Football Academy in San Clemente in 2017, where he still coaches, in addition to his position with the Tritons.

San Clemente hasn’t missed a beat with Spaccini at the helm, as the Tritons had a very strong showing through the preseason. San Clemente already has more wins this season (11) than last season (8).

“We have a group of girls that are just amazing,” Spaccini said. “The girls love each other. That’s really, really important. We have a fantastic locker room, and they’re all very supportive.”

The Tritons (11-3-3, 2-1-1) have flirted with the Division 1 top 10 rankings all season, and through the first round of league play, San Clemente has already shown that this year’s South Coast League is much more competitive at the top.

The Tritons fought to a draw with perennial and reigning league champion Aliso Niguel in their opener, 1-1 on Jan. 7, but lost a tight contest to a physical San Juan Hills team, 3-2 on Jan. 9. San Clemente followed up with two strong wins over Tesoro, 5-2 on Jan. 11, and Dana Hills, 3-0 on Tuesday, Jan. 14.

Style-wise, Spaccini has molded his team into an adaptable group that can play no matter what the matchup dictates, emphasizing the significant help of assistant coach Jennie Mann.

“We work hard every day, we try to be tough to play against,” Spaccini said. “We don’t want to play the usual kickball, but we’re also not possession style-based. Every game is different. Adapting is the best word in soccer.”

Freshman Rylie McLeish held down the fort in net before junior Emily Schad returned from injury. Schad posted a shutout against Dana Hills in San Clemente’s most recent match.

San Clemente kicks off the second half of league play at Aliso Niguel on Thursday, Jan. 23 and hosts San Juan Hills on Jan. 28. The Tritons host Dana Hills in their regular-season finale on Feb. 3.