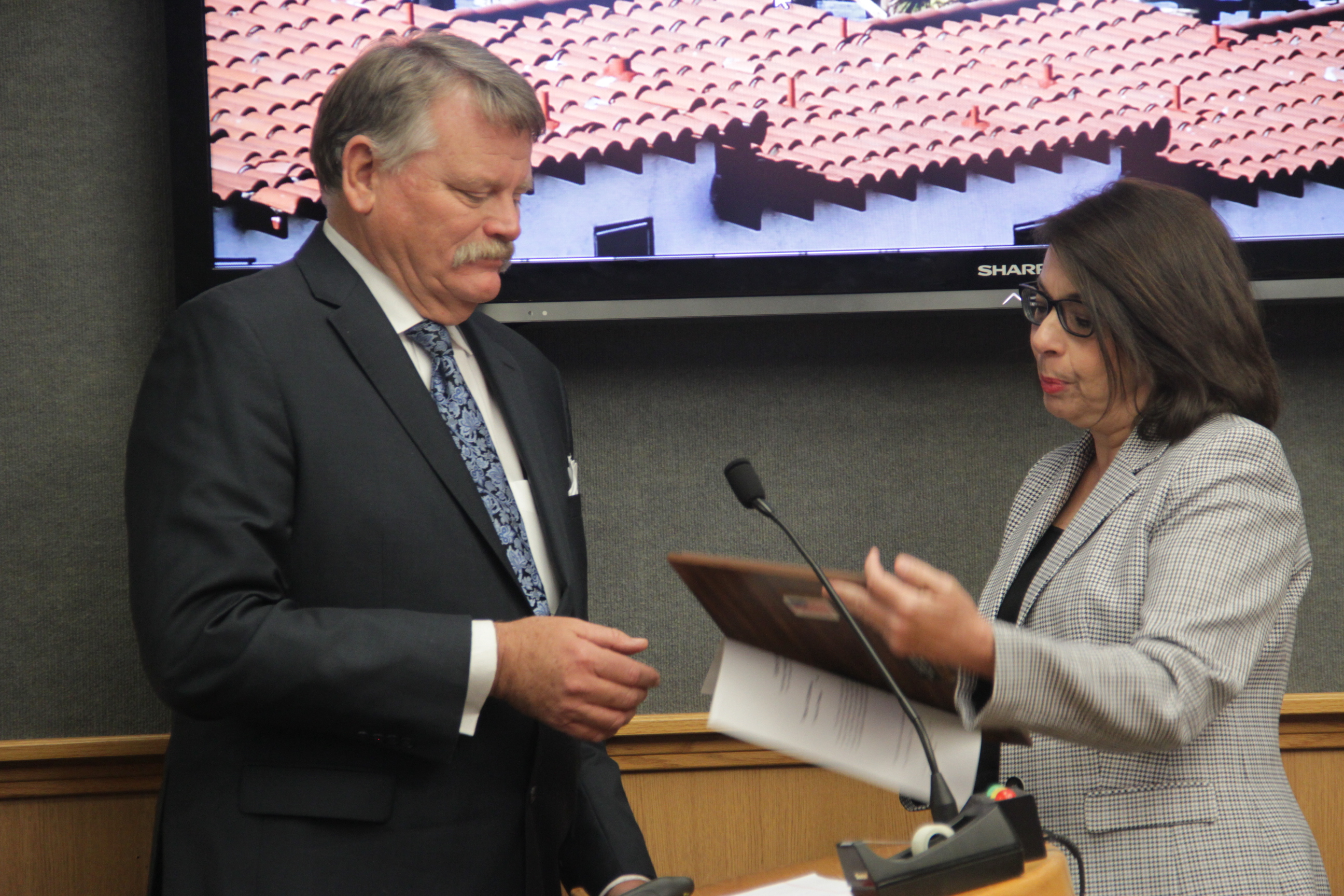 James Sworn in to Council; Bane Selected as Mayor of San Clemente

The city on Tuesday, Dec. 3, swore in its newest councilmember to the dais, allowing the fully impaneled council to also set its leadership roles of mayor and mayor pro tem for 2020.

Councilmember Gene James, who decisively won San Clemente’s special election last month while receiving nearly 55% of the vote, was administered the city’s Oath of Allegiance at the outset of the council’s meeting Tuesday night.

While delivering his opening remarks as a councilmember, James thanked his supporters who attended the council meeting and also implored the community to end acrimony found in San Clemente’s politics this past election.

“I would like to see some of the acrimony in politics in San Clemente to dispense with it, that we get to the business of running San Clemente and that we be here for all citizens,” James said. “I have to keep in mind that 45% for the voters did not vote for me, but I have to represent them just as much as I represent the 55% who did vote for me.”

In the wake of Mayor Steve Swartz’s untimely death while on vacation with his wife this past May, the city council voted to hold a special election to fill the open seat and serve out the remaining year of his term.

“I would much rather have run for a full term a year from now and have Mayor Swartz here,” James said, adding: “We need to keep in mind a family lost a father and a husband, and we’re getting ready to go into this holiday season, and let’s keep the Swartz family in our prayers.”

After being sworn in to office, James and his fellow councilmembers, with the exception of Councilmember Chris Hamm, who was absent from the meeting, conducted the election of mayor and mayor pro tem.

Councilmember Kathy Ward quickly nominated Dan Bane to the role of mayor, hoping to solidify his placement in the role that he held in an acting capacity as the mayor pro tem since Swartz’s death.

“I think that Dan Bane has done an exceptional job filling in for Swartz on the fly this year. He’s also the mayor pro tem, and I think following tradition of our city, I nominate him as the mayor,” Ward said, to robust applause.

Councilmember Laura Ferguson seconded the motion, which subsequently led to a 4-0 vote of affirmation, making Bane the official mayor of San Clemente.

Following Bane’s election as mayor, Ward nominated James to the mayor pro tem position. That nomination, however, didn’t receive support from the other members, prompting Bane to instead nominate Ferguson to the position.

Ferguson’s appointment to the mayor pro tem position was also approved in a 4-0 vote.

Bane later expressed gratitude for the nomination, noting that taking on the mayoral position after Swartz’s passing has been a difficult task. He also stated that despite having a four-person council without the possibility of a tie-breaking vote, they were able to get along and lead the city.

“The voters have spoken now, we know what we need to be doing now, and we hope that we can get to that,” Bane said, adding: “We’re doing what we think is best. . . . We will not always agree; we are all very different people. I thank the community for the support it has shown through very, very, very trying circumstances . . . I hope to have your continued support as we work into 2020.”