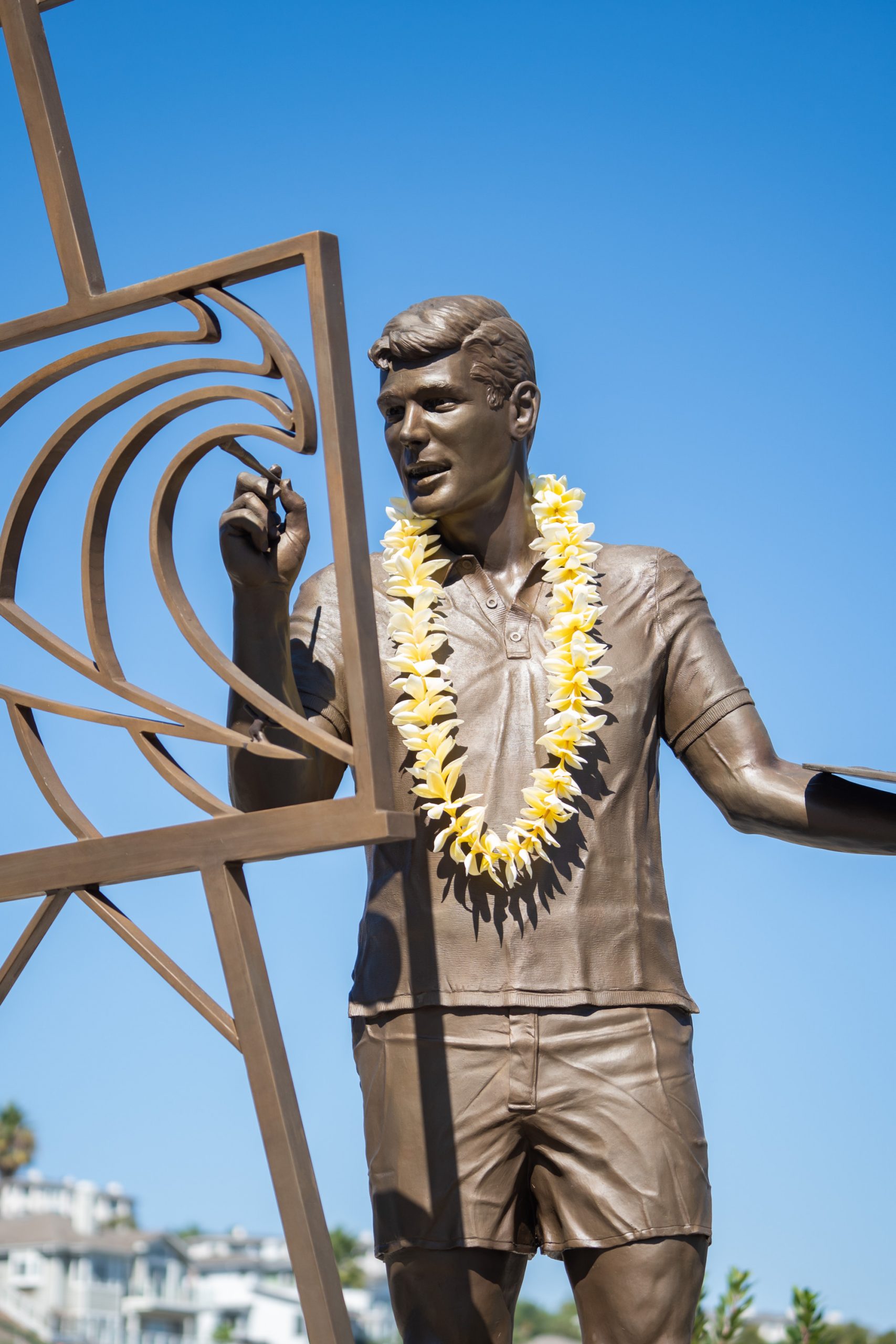 Before the internet ruined everything, Surfer magazine defined the sport, culture and lifestyle that surrounds the pure and simple act of riding a wave for more than a half-century. And it all started in a small office in Dana Point in 1960, when John Severson printed the first issue to support one of his films.

Now, Severson’s legacy and contributions to surfing have been memorialized in bronze. The latest addition to Waterman’s Plaza on Pacific Coast Highway in Dana Point, the new statue was unveiled last week.

The impressive life-sized sculpture captures Severson at work in front of an easel with paintbrush and palette in hand. It joins other sculptures of surf icons, including filmmaker Bruce Brown, surfer/shaper Phil Edwards and all-around innovator Hobie Alter.

All the sculptures have been created by artist Bill Limebrook, who grew up on Beach Road in Dana Point. His attention to detail and the lifelike nature he’s able to infuse into the bronze is simply amazing.

There are a lot of surf-themed statues around the world, but collectively, these rank among the best. And Limebrook’s not done yet. The Dana Point City Council recently commissioned another statue. The next one will be of pioneer Joyce Hoffman and is expected to be completed in 2021.

Severson, who passed away in 2017, first learned to surf when his family moved from Pasadena to San Clemente, where his father operated a gas station on the corner of El Camino Real and Avenida Aragon.

Immersing himself in the ocean lifestyle, Severson also spent his youth learning how to paint, take photos and use a movie camera—all skills that would serve him well throughout his life. He studied art, eventually earning a Masters of Arts degree in Art Education from Long Beach State. After school, he was drafted into the Army, where he served in Oahu.

It was in Hawaii that Severson made his first film, simply titled Surf. He would continue to release surf movies for the next decade, culminating with Pacific Vibrations in 1970. But it was in the print business that Severson would really make his name.

In 1960, he released a 36-page booklet called The Surfer to support one of his films. He spent $3,000 on printing. At $1 a copy, he charged $2 and quickly realized that his promotional device could actually turn a pretty profit. Surfer magazine was born.

Severson hired photographer Ron Stoner, artist Rick Griffin, as well as writers such as Drew Kampion and Steve Pezman, to steer the publication. By the second half of the ’60s, Surfer was the de facto “bible of the sport.”

“I like to feel that surfing is a little more artistic and light, with a sense of humor, because of Surfer magazine,” Severson said when interviewed for his 2011 Surfer Poll Lifetime Achievement Award.

As I’ve written previously in this column, Severson’s time in San Clemente came to an end after President Richard Nixon moved to town. Severson had scored himself a quaint beachfront pad at Cotton’s Point, which turned out to be right next to the Western White House.

By this time, Surfer magazine had taken a decidedly counterculture stance, and Severson and Nixon were immediately at odds. The relationship went really south when Severson snapped some pictures of Nixon and sold them to Life magazine.

By the time the ’70s started, Severson had had enough with Nixon and his cronies. He sold Surfer, pulled up stakes and moved to Maui, where he continued to live and paint for the rest of his life.

Sadly, earlier this month, it came to light that Surfer magazine hadfurloughed its staff and had decided to pause printing for the time being. There is a lot of speculation that Surfer will return in some form in the not too-distant-future, as it maintained a loyal readership and strong voice in the community all the way through its last issue.

Hopefully, this is the case, as Surfer has helped to shape countless lives over the years. Personally, I wouldn’t be doing what I’m doing today if it weren’t for Severson’s vision and passion. The same can be said of the owner and publisher of this publication, Norb Garrett, who ran Surfer and other titles as president of the Adventure Sports Network for nearly a decade.

For now, with the future of Surfer currently undecided, Severson’s legacy will live on in bronze. He now eternally stands with his friends Phil, Hobie and Bruce, and if you’re driving through Dana Point and have few minutes to spare, stop by Waterman’s Plaza and pay your respects. Without these guys, the sport, culture and lifestyle of surfing would look very different.