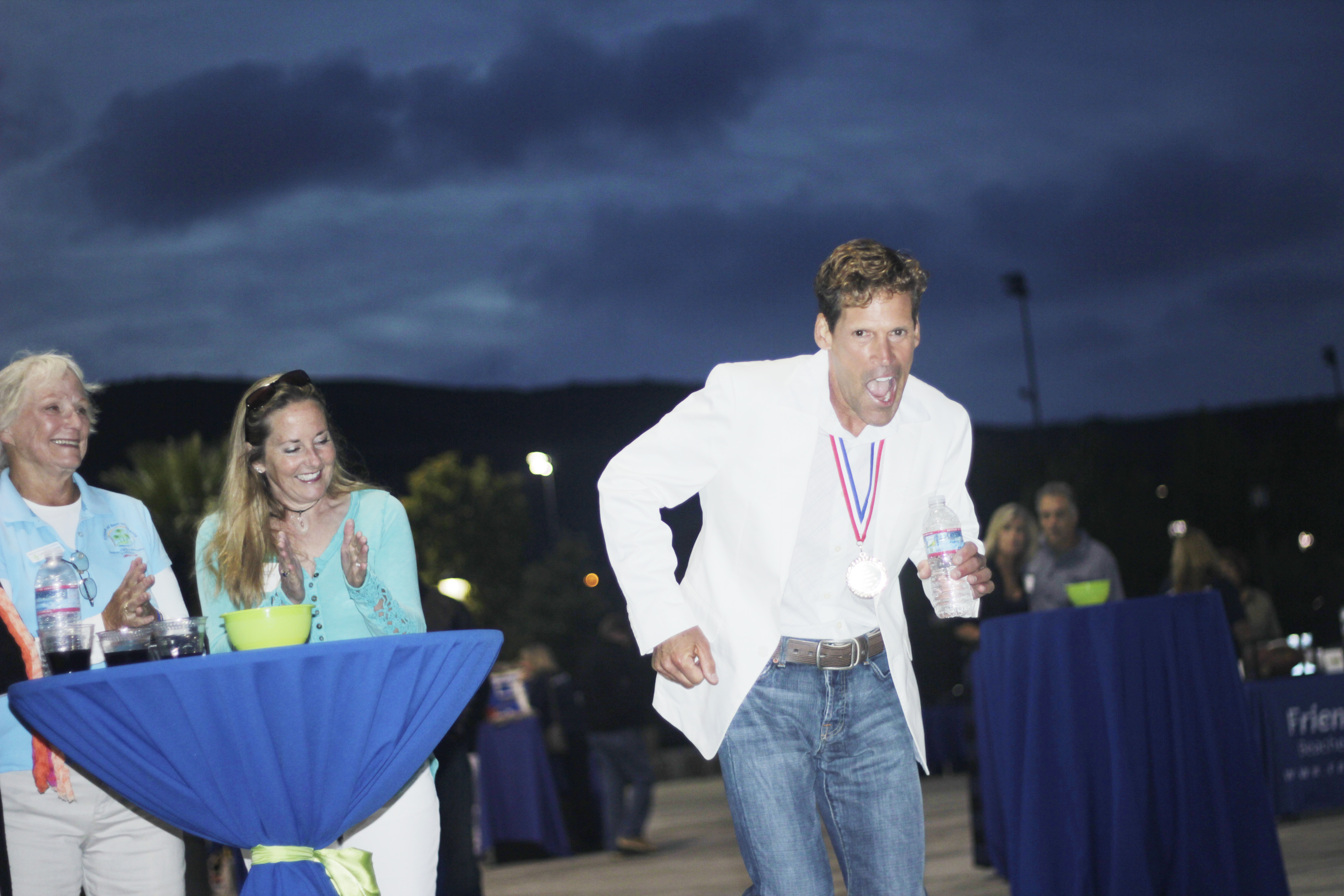 The 2015 Friends of San Clemente Sports Hall of Fame class opened up the door for a different kind of sports star to stand alongside their peers in the city’s shrine to athletic achievement.

Take ultra-distance runner Dean Karnazes, for example. Karnazes, who has garnered worldwide fame for pulling off incredible feats of distance running, is the first athlete of his kind in the hall.

John Severson, the founder of SURFER magazine, is renowned for being a big wave surf legend but is also recognized for his contributions in depicting surf culture across multiple media platforms.

In a town that has produced dozens of elite watermen and swimmers, Caverly, an Olympic athlete, is the first competitive swimmer to be enshrined.

All three of these unique athletes were honored by the Friends of San Clemente in a ceremony on May 16 at the Vista Hermosa Aquatics Center. Their names will now be adorned on a special wall and mural along with 11 other hall of fame members.

Karnazes did not start running long distances until the night of his 30th birthday. After celebrating at a bar with friends, Karnazes had an epiphany, feeling the need to leave the bar and run for 30 straight miles. It was a night that the San Clemente native said “forever changed the course of his life”.

Karnazes has continuously pushed his body to extremes ever since.

He once ran for 350 continuous miles, a trek that spanned over three days. He has run ultra-distances in the Sahara Desert and Death Valley when the temperatures pushed upwards of 120 degrees. He’s gone to the other extreme as well, finishing a marathon in the South Pole in negative 40 degrees.

Karnazes grabbed national headlines in 2006 when he ran 50 marathons in 50 states in 50 days, ending with the New York City Marathon, which he ran in exactly three hours.

“I find that I am never more alive than when I am struggling and in great pain running long distances,” Karnazes said. “I’ve never competed against anyone but myself. In doing the things I do, it’s largely you versus you. Mastering your body and mind requires 100 percent focus. I’ve always just tried to be the best me that I could be and figured the rest was beyond my control.”

Karnazes graduated from San Clemente High School but was only on the cross country and track and field teams for his freshman year. Karnazes gravitated towards the Tritons volleyball team, where they finished runner-up at CIF his senior year, and the surf team, which won a CIF title during his four years.

Severson grew up surfing the breaks of San Onofre and adopting the golden age surf lifestyle. He would soon develop a passion for the arts, which included directing surf films, photography, painting and writing.

Severson founded SURFER magazine, directed films such as “Surfing Safari” and “Big Wednesday” and is still publishing today. His most recent book, “Surf”, chronicles his journey through surf’s golden years.

Severson witnessed first-hand the rise of surf culture in San Clemente, which he says started at San Onofre State Beach. He grew up learning how to surf thanks to some of the local lifeguards and sold paintings to support what he calls “the shack life”.

Severson’s films and the founding of SURFER helped bring what he and his surfing companions thought was an honest representation of what surf culture was at the time, serving as a sharp contrast to other, more mainstream Hollywood surf films released at the time.

“We didn’t aim to get it right. We just knew what was happening and how to portray it for us,” Severson said.

Caverly was a 19-year-old collegiate swimmer for Stanford University when she made a bid to qualify for the United States Olympic swimming team prior to the 2004 Games in Athens.

During qualifying, where swimmers must finish in the top two spots in each race in order to make the team, Caverly came up just short in her three best events. She placed third in the 400 IM, fourth in the 200 IM and fourth in the 200 breaststroke.

She reluctantly tried the 200 backstroke, not her forte, as a last-ditch effort. She ended up placing second and made the U.S. squad. Caverly finished 17th in the event in Athens.

“The Olympic experience was one of the highest moments of my life and career. Looking back, it all seems like a dream. It was thrilling, intense and awe-inspiring,” Caverly said.

Caverly, who now lives in Brazil with her husband and four-month-old daughter, was only 8-years-old when she began breaking records at San Clemente Aquatics. She would continue to excel in the pool in high school at San Clemente High, where she set the National High School Record in the 200 IM. She would go on to become a three-time All-American at Stanford.