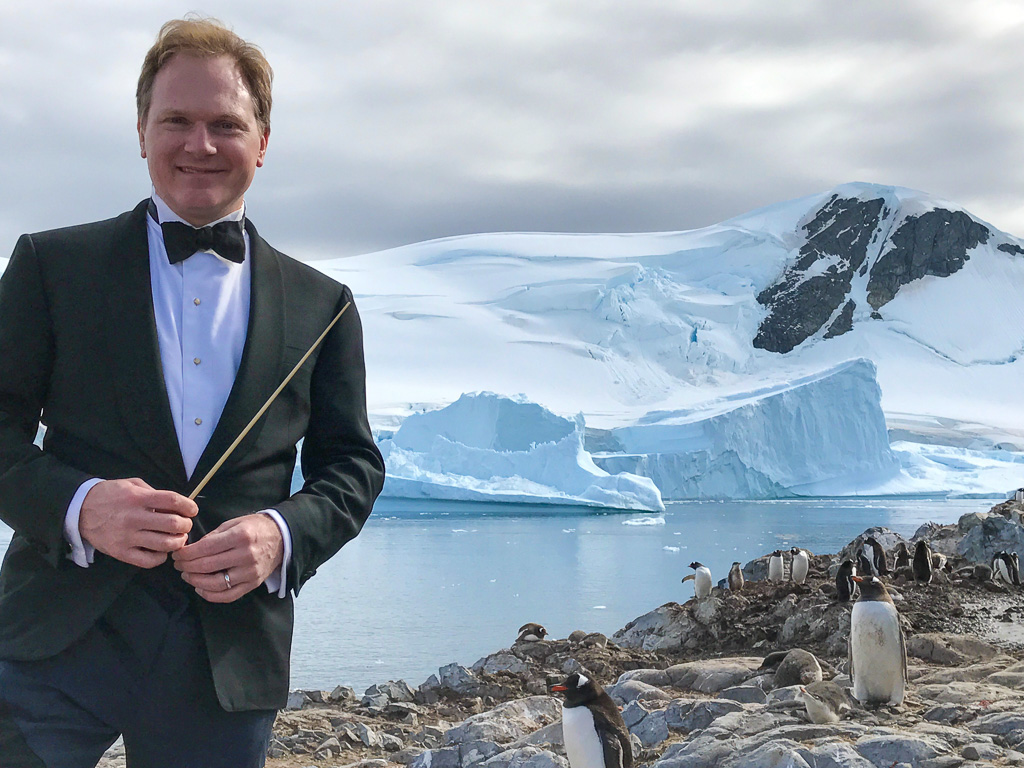 His mother, Darrolyn, said she would have to command him to bed in the wee hours of the night while he practiced complex compositions of Gershwin, Beethoven and others; those are pretty difficult compositions for most 12-year-olds, but that’s also the age he performed his first Mozart concerto.

Today, he’s traveling the world, performing for some of the most elite audiences. One such performance of his own version of “Rhapsody in Blue,” which he adapted with different instruments and upgraded the unfinished piece to include choral elements, earned him knighthood in 2017 in Spain under The Sovereign Order of the Ecumenical Knights of Malta O.S.J. at the Boltaña Monastery.

Michael will perform a concert on June 23, titled “Rhapsody,” which takes place at the Geneva Presbyterian Church in Laguna Woods.

From SCHS to Juilliard

It didn’t take long for bars of prodigious talent to project from Michael.

“When he was 2 years old, he had a jacket, one you’d dress up for church or something, and he had a step-stool and he would conduct with music playing,” Darrolyn said. “When he was 9, he said he wanted to be the best. He said, ‘I don’t think you understand. I know it’s going to be a lot of hard work. But please make me practice.’”
Quite a strict, self-imposed regimen for a fourth-grader. Although Michael’s mother honored his ambitions, she also didn’t want him to turn into the Phantom of the Opera.

“All the time at midnight, he would practice for four hours, and I would tell him that we have to do other things, like sleep,” Darrolyn said. “He was very athletic but didn’t have time for team sports, and practicing (music) and getting good grades take up a lot of time.”

Dr. Michael Fennelly of San Clemente was knighted by The Sovereign Order of the Ecumenical Knights of Malta O.S.J. in 2017 for his performance and adaptation of George Gershwin’s ‘Rhapsody in Blue.’ He will perform on Saturday, June 23 in Laguna Woods. Photo: Courtesy of Michael Fennelly

Dr. Michael Fennelly graduated from SCHS and eventually taught at the prestigious Juilliard School and traveled the world to perform. Photo: Courtesy of Michael Fennelly

In high school, Michael performed with his two sisters in a violin, viola and cello string trio, opening for performances in the area. At 16 years old, he received a scholarship from the Boys’ Club of America (now known as the Boys & Girls Club of the South Coast Area) and gave a concert at the end of the year, and he was able to travel to New York City to perform a concert.

At San Clemente High School (SCHS), he was involved with the school’s orchestral programs and also took private lessons.

“They have a great orchestra program. My teachers and the music program were great,” Michael said, “but (without) San Clemente High School, I wouldn’t have been able to explore this.”

Michael graduated from the Eastman School of Music and the Manhattan School of Music, where he achieved his Doctor of Musical Arts degree, studying under pianist Byron Janis.
Eventually, he found himself teaching as a pianist and coach for several years with the Juilliard School and he has continued to work with the Metropolitan Opera.

“I’ve been performing all over the world, but to come home and play for the people who saw me grow up is always special,” Michael said.
Reviving ‘Rhapsody’

Michael said he has an affinity for George Gershwin’s “Rhapsody in Blue,” quite possibly one of the most played songs in the world—United Airlines is playing a version of it as you’re reading this during one of its in-flight safety videos.

Last year, Michael was the soloist with the National Chorale, performing his own arrangement of Gershwin’s “Rhapsody” for solo piano, orchestra and symphonic chorus at David Geffen Hall in the Lincoln Center.

Dr. Michael Fennelly’s concert titled “Rhapsody” will make its West Coast premiere at 4 p.m. on Saturday, June 23 at the Geneva Presbyterian Church, located at 24301 El Toro Rd., Laguna Woods. Admission is $30 or $25 for students and seniors. Tickets are available at the door, from choral members and at www.masterchoralesv.org. There will also be a post-concert reception. For more information about Michael, visit www.michaelfennelly.com.

Michael recently performed “Rhapsody in Blue” with the New Jersey Festival Orchestra and with the Buck Hill Skytop Festival, according to a press release.

Gershwin wrote “Rhapsody” when he was 23 years old and it made him famous quickly, but there are also elements that were fairly recently discovered as unfished parts of the piece, Michael said.
“There’s an arrangement for a piano solo and there’s an arrangement for anything, string quartet and things that have been written,” Michael said. “It kind of disappeared and I couldn’t believe they didn’t publish it. This is going to be the premier in California of this new version.”

You’ve heard the song before, but Michael’s version will include many other elements of music.

“With chorus, that has not been done anywhere. But we’re also (celebrating) Leonard Bernstein’s 100-year birthday,” Michael said, adding that he’ll be performing with his wife, Megan Weston.

Recently, Michael started a new chapter in his musical career as a conductor. Through the New York season, he conducted the premieres of “From My Mother’s Mother” in Manhattan with the Korean Cultural Center in New York, “Les Trois Mousquetaires” in Woodstock, New York, with the Phoenicia Festival; and he assisted on “Four Nights of Dream” with the Japan Society in sold out performances in Tokyo, among a slew of other performances.

Michael also recently represented the U.S. Department of State on a tour of Japan and has performed in many of the world’s renowned concert halls, including Carnegie Hall, Avery Fisher Hall, Munich’s Prinzregenten Theatre, and Berlin’s Komische Opera.