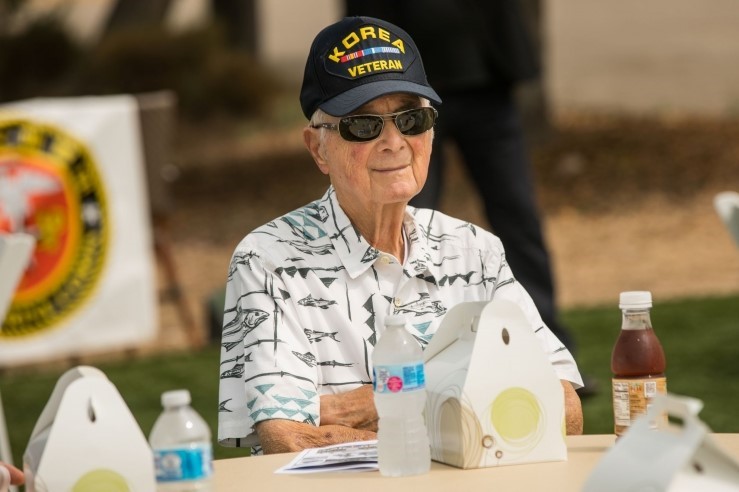 Bob Harhay, a longtime San Clemente resident, liked to listen to others more than he liked to talk.

“He was a great listener,” LaVerne Harhay said of her husband, a Korean War veteran. She added that while “he wasn’t boisterous,” whenever he eventually did speak, “he spoke up clearly.”

Bob, she continued, was also well-read and enjoyed gardening, as he would tend to his orchard at home, where he could listen to and feed the birds.

But most importantly, Bob, who enlisted in the U.S Marine Corps in 1945 and served for 20 years, retiring as a gunnery sergeant, “was always such a proud Marine,” his wife of 67 years told San Clemente Times this month.

“He always supported the military. … He was so close to the military, so he joined the VFW right away,” she said, noting that it was as if his time in the armed services never ended. She later added, “He was extremely proud to be a Marine.”

Bob dedicated much of his life to the armed forces, supporting various causes to promote military involvement and connection among other veterans. So, it seemed only fitting that one of his last acts of service was being able to celebrate the Marine Corps’ birthday on Nov. 10—just two days before dying peacefully at his San Clemente home with LaVerne by his side.

Tom Harhay, Bob’s son, explained that his father had previously been diagnosed with stomach cancer about five years ago, and he began to undergo chemotherapy treatment. But about two months ago, Tom said, Bob began to feel ill again, and his condition worsened.

Bob was able to attend the Marine Corps birthday and cake-cutting ceremony at Luciana’s in Dana Point, where, as the eldest living Marine in attendance, he had dibs on the first slice of cake.

“He got up there and did it, and realized he wasn’t feeling well,” Tom said. “He didn’t finish his dinner. I took him home, and his body started closing. He died at home with my mom, peacefully. It’s what he wanted. So, we actually rejoice about that, and we’re not sad about that.”

The Ohio native, who eventually settled his family in Southern California, died of natural causes at the age of 92 on Nov. 12. Bob, who would have turned 93 on Jan. 6, was buried with military honors during a private ceremony at Miramar National Cemetery in San Diego on Nov. 27.

For years, Bob held positions in the VFW Post 9203 Tustin, the Armed Forces Retirees Association and the Marine Corps League South Coast Detachment 022. He was also a volunteer and benefactor to the Dana Point 5th Marine Support Group, as well as other local groups.

In San Clemente, Bob’s legacy as a supporter and advocate in the veteran community will live on at Park Semper Fi and the Marine Monument. Bob was a benefactor in establishing the park and helped to raise community funds toward the project.

“Bob and his family attended every Ceremony at Park Semper Fi for the past 15 years, and financially contributed throughout the years,” Wayne Eggleston, executive director of The Heritage of San Clemente Foundation, said in an email. “Bob was one tough Marine, and he will be remembered for his dedication as a living example of the ‘Greatest Generation.’ ”

Tom, a former captain paramedic with the Orange County Fire Authority who now runs a local business, thought back to what he’ll remember most about his father. He said Bob was his role model and was also a role model to youth in the community.

Tom also recalled his father teaching him and other kids in his neighborhood growing up how to fight and box properly—skills learned from his time in the Marine Crops.

For LaVerne, she’ll remember her late husband’s kindness and generosity.

Additionally, she said, she’ll remember his work ethic, as he was someone who worked hard and expected others around him to do the same. She recalled a time when their two daughters began to date and brought home boyfriends.

“If the kids were starting to date, the first thing he asked the men coming over, he would ask, ‘Do you work? What’s your job?’ ” she said. “And if they didn’t, he would help get that boy a job.”

LaVerne said the two had known each other since they were kids, as their mothers belonged to a club. During meetings, she recalled, they’d both be there, but neither ever paid much attention to the other.

All that changed, however, the night of his going-away party before shipping off to Korea. LaVerne said that the two dated the entire time he was on leave, even proposing to her in his letters sent home.

She noted that she was reluctant to say yes right away, acknowledging that servicemen typically feel lonely on deployment. She wrote back, telling him, “We’ll wait till you get back, and if you still feel the same, we’ll be married.”

“We lived happily ever after,” she gushed. “And he was my rock. Where I was weak, he was so strong. And that was so wonderful as a woman to have such a rock to bounce things off of.”

Among the rest of the family, particularly their six grandkids and 10 great-grandchildren, Bob, LaVerne said, will be remembered as the one who always gave them ice cream growing up.

“He’s so blessed he got to know them all. He loved the babies and got to see them growing up … they always made a fuss over him; they loved him right away,” she said, concluding that “people were drawn to him. He was just a terrific guy.”