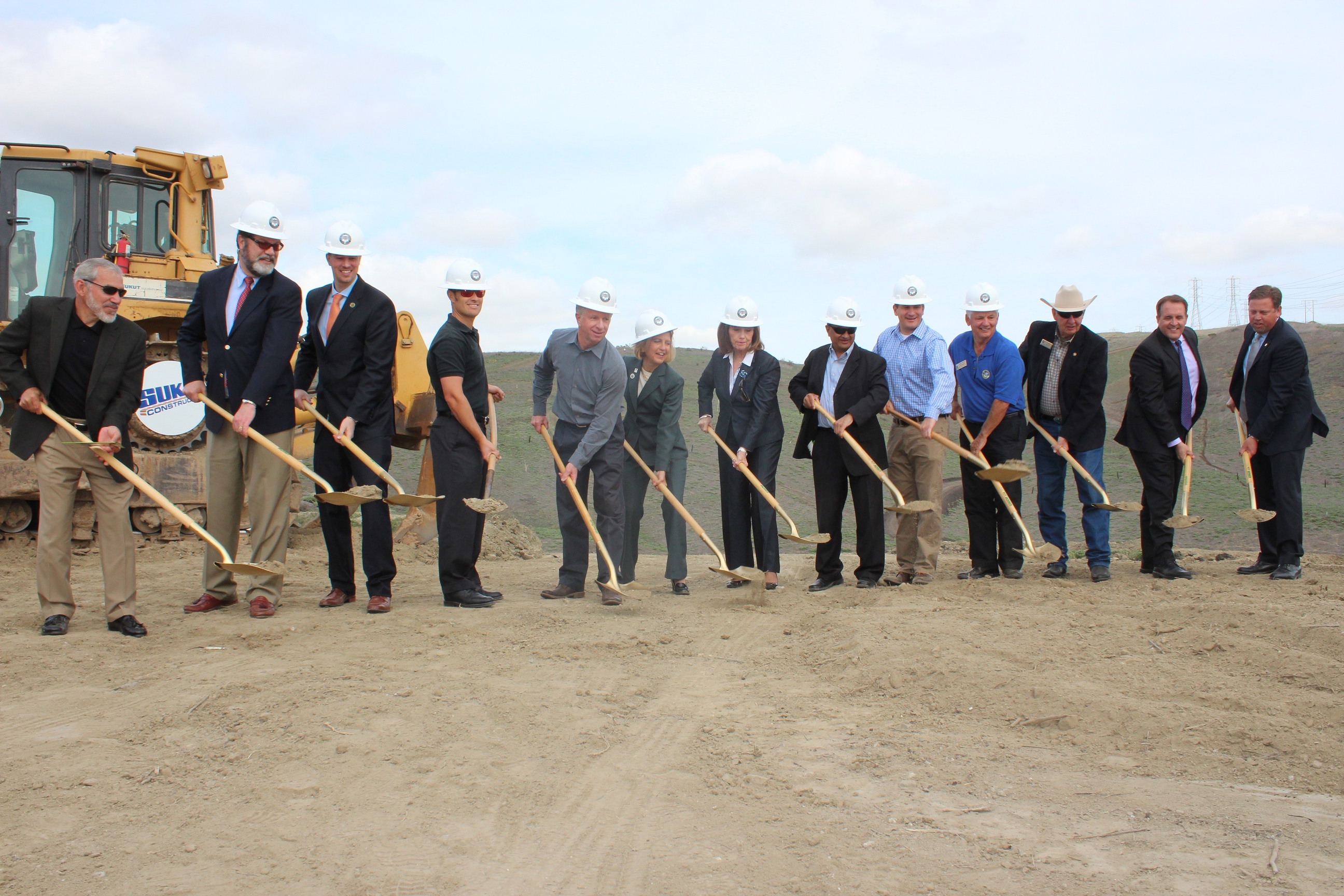 By Jim Shilander
San Clemente, San Juan Capistrano and Orange County officials smiled throughout Friday morning’s groundbreaking ceremony to celebrate a more than 50-year journey to provide a link between the two cities and an additional option for area drivers.

Work will soon begin on extending La Pata Avenue from its current northern terminus at the county’s Prima Deschecha landfill in San Juan Capistrano to San Clemente, just past Calle Saluda, where the road is called Avenida La Pata. Officials from the three government bodies all noted the length of time the project had been in the planning stages. The project will cost $73 million.
The plan was initially put on the county’s Transportation Master Plan in 1963. La Pata Avenue began as an access road to the landfill in 1970. In San Clemente Avenida La Pata was in the 1982 General Plan and Talega and Forster Ranch specific plans.

San Clemente Mayor Tim Brown said residents had been waiting for the day the project could get moving.

“This is something we wanted, that we hoped for and asked for, for years,” Brown said. “What was promised is now being done. It’s really the most important road project since Interstate 5 came through the city and certainly will be very important for Forster Ranch and Talega.”

Fifth District Supervisor Pat Bates has been a longtime advocate for the project. Speaking before the groundbreaking, Bates said the more than 2-mile gap closure was “the most significant county roadway improvement project remaining in Orange County.”

Rather than being an interesting path for hikers, she said, it would soon provide a way to bring south county cities closer together. The project is expected to be completed in the fall of 2016.
Mission Viejo City Council and Orange County Transportation Authority board member Frank Ury said the project was also indicative of transportation monies finally making their way south.

Funds for the project are primarily from Measure M funding, a half-cent sales tax Orange County voters approved levying on themselves in order to provide infrastructure improvements. Both cities are also providing funding as is the county department of waste and recycling.

San Clemente City Councilwoman Lori Donchak, herself an OCTA board member, said her lobbying efforts on behalf of the project in Washington and Sacramento focused on safety, as area residents can now only use Interstate 5 as a route away from the city in case of an emergency.

“We needed a back door,” Donchak said. “We needed a way out in case of an emergency.” She also said the project could also greatly reduce the potential commute for residents sending students to San Juan Hills High School, perhaps 45 minutes, each day.

San Juan Mayor Pro Tem Larry Kramer said the school would benefit from a new influx of students from a different area and would serve as a good way to bring the two cities together.

Soon, officials from all over the county were tossing dirt from the gold-colored shovels. One who didn’t participate in the ceremonies but helped to make the day possible was San Clemente’s former traffic engineer, Akram Hindiyeh, who retired in 2011. Hindiyeh spent much of his tenure managing the infrastructure of the city’s ranch developments, which will likely be most affected by the new road, as well as additions to nearby Camino Del Rio, a project that will be completed in conjunction with the La Pata gap closure.
“I’m glad I got to see this because it will be a great asset to San Clemente and south county as a whole,” he said. “We tried very hard to get this done. With Camino Del Rio, we’ll be able to connect Forster Ranch, Rancho San Clemente and Talega.”

Camino del Rio currently terminates at the Forster Ridgeline Trail in northern San Clemente. The road will ultimately connect with La Pata and will be the third phase of the project. That section, along with widening being done in San Juan, which is phase two, does not yet have funding. The county expects to be able to have the funding in place in time after the completion of the extension.

Mike Crawford, president and chief executive officer of Sukut Construction, the contractor hired by the county to build the road, said his company has a number of topographical challenges facing them, including filling in canyons. He said the project would start between the two termini and work toward both.

“It’s what we do,” Crawford said. “We’ve done jobs on difficult terrain before. It’s not an easy project by any stretch, but it’s what we do.”