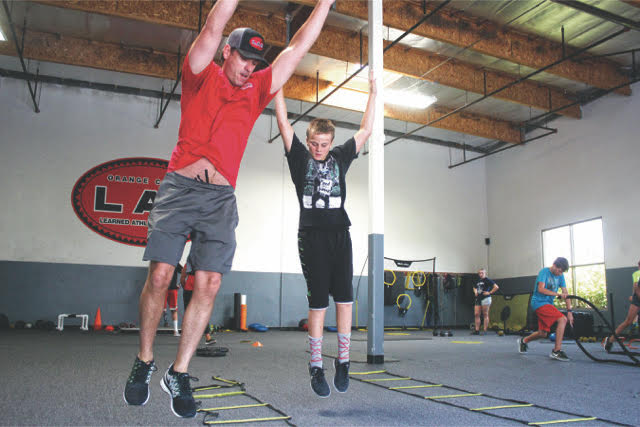 The LAB: Local Training Facility Builds Community Among Its Athletes

National Letters of Intent, All-American helmets, and college and professional jerseys cover nearly every inch of the lobby walls of an athletic training facility home to some of San Clemente’s most decorated athletes.

Since 2003, San Clemente residents John Bradley and Chris Lippincott’s Learned Athletic Behavior, better known as “The LAB”, has served as the common denominator in the training programs of the town’s most elite athletes.

What keeps these elite athletes coming back to the warehouse facility in Talega, many said, is The LAB’s guiding philosophy, which centers around producing well-rounded athletes.

“I’ve been training with John since I was in sixth grade and he has helped me become the best overall athlete I can be,” Darnold said.

Many of The LAB’s athletes, like Murphy, come back home to train every offseason.

“When it came to different conditioning camps and tests, I felt I was well prepared from both a physical and mental standpoint because of my years of training with John,” Murphy said.

Even though they use a unique training style, one of the overriding qualities of The LAB has been its ability to create a sense of family and community amongst its athletes.

Whether it’s checking in with them to see how they are doing after a workout, or shooting them a motivational text, The LAB’s athletes expressed that Bradley has always been there for them.

“John was more than just a trainer. He truly cared about each individual athlete and their unique skill set,” Erin Yoder said, a San Clemente native who played women’s volleyball at USC.
“For years, I’ve trusted John as a trainer, and he’s trusted me to put in the work, treating me like one of his sons. To be able to have that trust in him is really cool,” Darnold added.

Bradley and The LAB have also been a long-time fixture on the sidelines of San Clemente High School athletic programs, having worked with the Tritons’ girls soccer and boys lacrosse teams.

A handful of players on the 2016 CIF and State Championship football team currently train at The LAB, including incoming senior and All-CIF first team running back Austin Whitsett, who is inspired every time he strolls through The LAB’s doors.

“When you walk into the LAB and see all those jerseys on the wall, you remember all those big names that came before you,” Whitsett said.

SCHS head football coach Jamie Ortiz said Bradley has been a tremendous advocate of the program, as a well as a stable voice with its players.

“I’m a firm believer of when it comes to building an elite athlete it takes a village, and John has played a big role in helping develop the athleticism component in a lot of our players looking to take it to the next level,” Ortiz said.

The LAB has helped approximately 200 athletes, a majority coming from San Clemente, accomplish their dreams of playing collegiate athletics.

“They’re all basically like our kids,” said Bradley, a father of three.

The LAB’s first location was in a small, office-sized space in Dana Point in 2003. One of the main catalysts behind its growth in recent years can be traced back to former SCHS quarterback Duke DeLancellotti.

DeLancellotti, who currently plays professional football in Denmark, said his first workouts at The LAB instantly paid off on the field. His improved balance, flexibility and explosiveness led to better footwork, and complimented his football workouts. His performance, he said, changed for the better.

DeLancellotti told other SCHS football players about his new training spot, and his teammates followed him there. The LAB quickly became known for promoting a competitive, team-based environment. The initial group of football players included a number of former SCHS standouts that would go on to play college football, including Kevin Murphy (Harvard) and Will Tober (USC).

“John believed in us and his support laid the foundation for the future” Tober said.

As its client base grew, The LAB moved to its current home in a spacious facility in the Talega neighborhood in October 2016 – over a decade after starting in a space about one-quarter of its size.

Like its infrastructure, the LAB’s athletes have also continued to grow, though its support for its athletes has always remained constant.

“I flip out when I’m watching games … all the stress, anxiety and excitement of watching your kids living their dreams on some of the greatest stages … it’s an awesome feeling,” Bradley said.