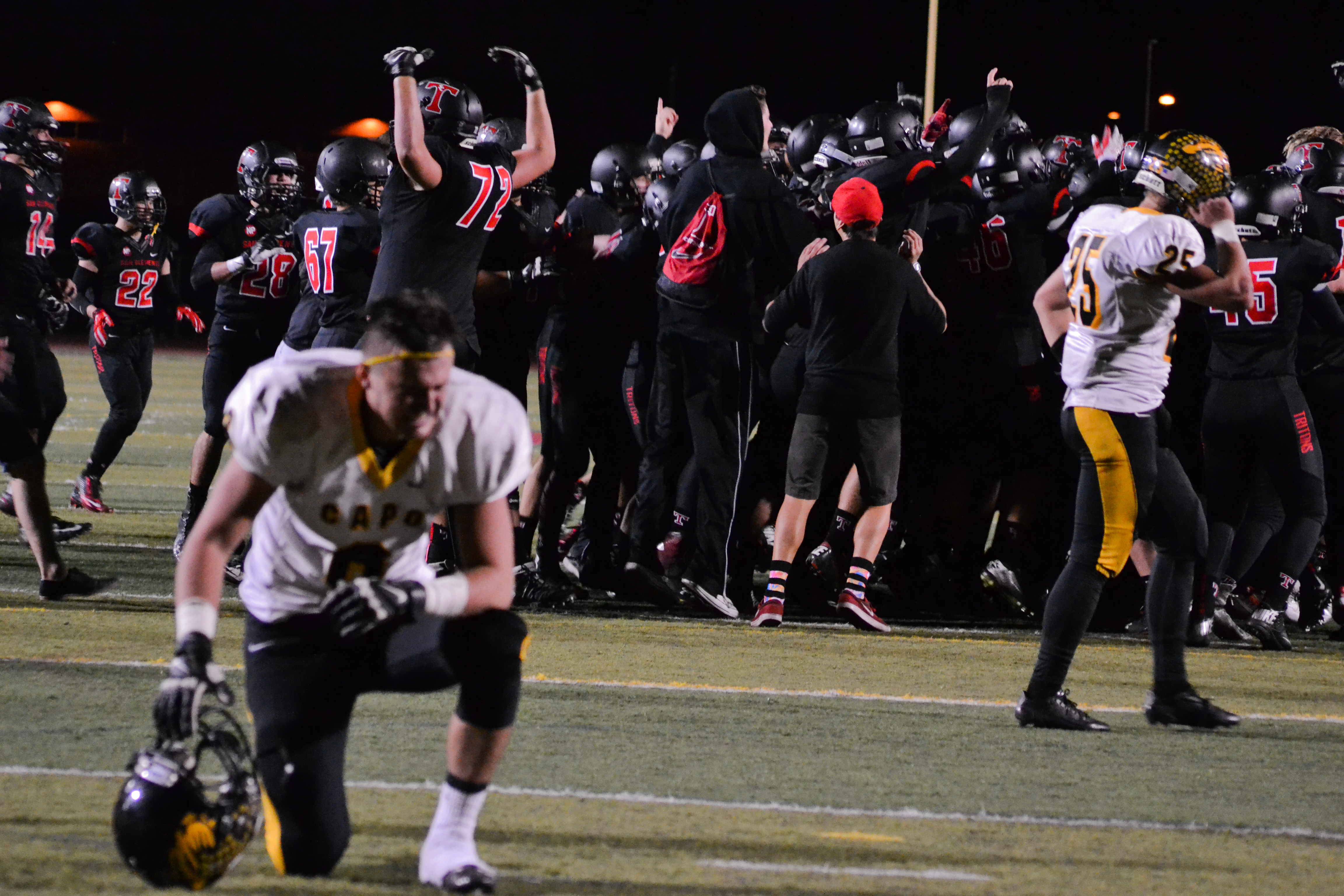 They might have been playing a team for the second time this season, but everything about the San Clemente High School football team’s re-match with Capistrano Valley in the CIF-SS Southwest Division semifinals was different on Nov. 28.

The Tritons trailed in a game for the first time since Oct. 2, but rallied behind their potent offense in the final quarter overcoming what was an 18-point deficit to force overtime and eventually defeat the Cougars 28-27.

In the two Sea View League rivals first meeting of the season, San Clemente breezed their way to an easy 54-27 victory. But Capistrano Valley pushed them to the brink on Friday.

San Clemente trailed by a touchdown with just over one minute to go when quarterback Sam Darnold threw a 39-yard strike to Jake Russell, who was brought down at the one-yard line. Darnold dove headfirst into the line of scrimmage on the next play, emerging from a pile of bodies and across the goal line to tie the game at 21-21.

In overtime, Capo Valley’s Jordan Bocko scored on a two-yard rush but the Cougars failed to convert the point-after attempt, leaving the door open for the Tritons.

San Clemente junior running back Vlad Dzhabiyev broke off a 23-yard run to put San Clemente down at the two-yard line and sophomore Brandon Reaves ran it in seconds later. Kicker Chase Berman left  no doubt, splitting the uprights on the point-after attempt to give San Clemente the narrow one-point victory.

“That was a heavyweight fight. Two sluggers going at it back and forth … We dodged a major bullet there,” San Clemente head coach Jaime Ortiz said. “I thought our kids fought at the end and persevered. They never quit and that’s a sign of a good team”

The need for a Tritons comeback originated from the Cougars pursuit on defense in the first half, which forced three San Clemente turnovers and caused a safety.

The Cougars defensive front seven pressured  Darnold early and often. On his first pass attempt of the game, Darnold rolled out of the pocket and threw the ball right into the hands of the Cougar’s Trevor Wise. The interception set up a drive that ended with the first of three Bocko rushing touchdowns.

San Clemente’s woes continued on their next possession, when they bobbled a snap in their end zone while trying to punt. The ball rolled out of the back of the end zone for a safety, giving Capo Valley a 9-0 lead.

After scoring a field goal, Capistrano Valley forced a Tritons fumble at midfield and recovered it. They were held to a three-and-out and punted away but got the ball right back after yet another Tritons fumble. This time, the Cougars capitalized and Bocko broke off a 14-yard scamper to build an 18-0 lead.

The Cougars took a 21-7 lead into halftime.

Darnold connected with Cole Harlow for a 16-yard touchdown pass at the 8:07 mark in the fourth quarter, breathing life into the comeback. A Russell interception set up the scoring drive.

Seven minutes later, after a strong defensive effort stopped the Cougars run game, Russell and Darnold connected on a pass play that saved the Tritons season and ensured they will live to play another day.

“This is the greatest feeling in the world. I’ve never played in a game like this and this is something really special to me,” Russell said. “It’s all my brothers out there and I’m really glad we were able to come back and get the win there. That was really special.”