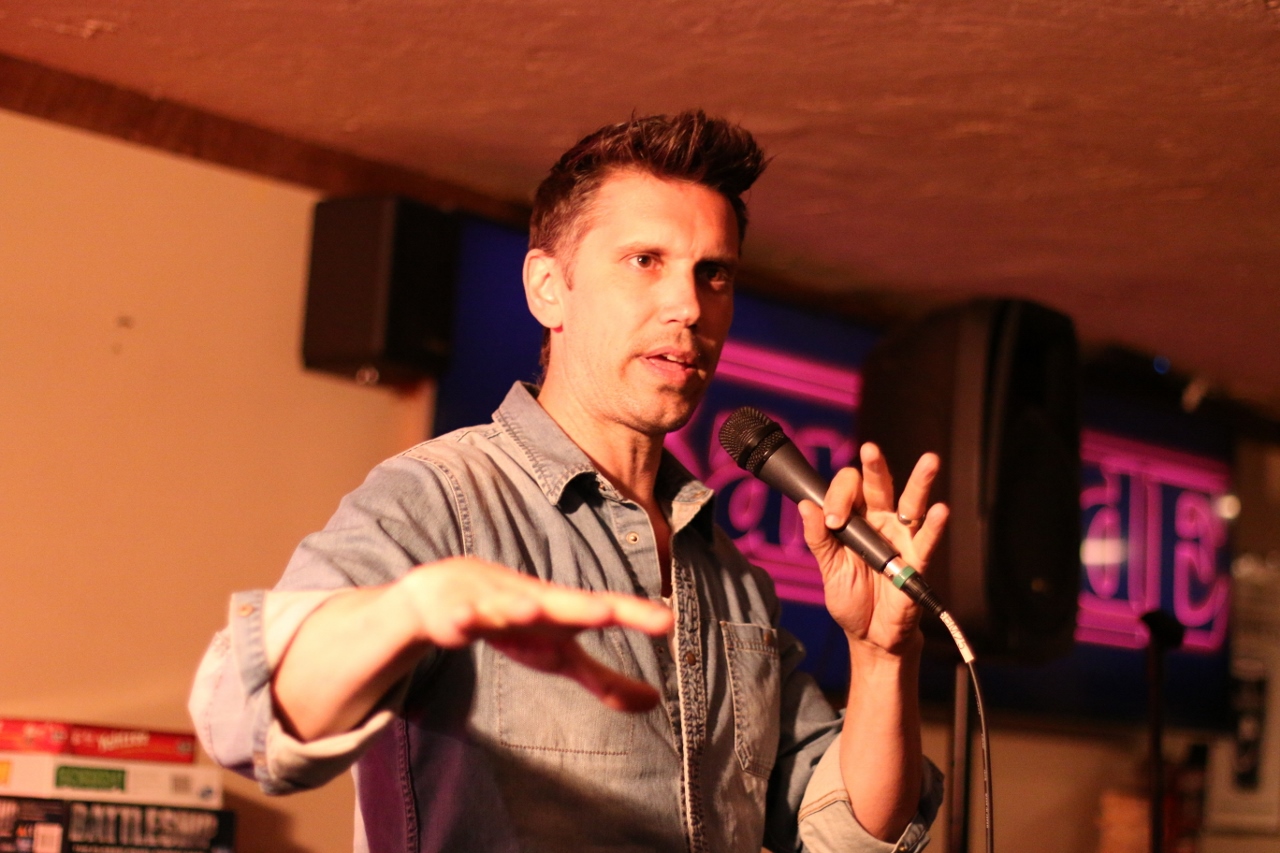 Why do we pursue humor? Why do we laugh? What makes us laugh? And why is it important that we maintain that bit of our humanity?

Whatever the reasons, comics across the globe attempt to tap into that part of us that begs for laughter. The task can be arduous and unforgiving, as many comics travel tens of thousands of miles each year, performing at dozens of venues under various scrutiny.

Not everyone hits a meteoric rise, like comics Kevin Hart or Aziz Ansari. Most of the time, it’s a struggle just to get one big laugh.

At Molly Bloom’s Irish Pub in San Clemente, stand-up comedy is performed every Wednesday night. There are comics who come from just about everywhere, most of them based out of Los Angeles, but time is also reserved for locals and anyone else to do 5-minute sets.

“A lot of the comics work the Los Angeles audience; you sometimes get jaded audiences, and down here it’s a bit fresher,” said Doug James of Doug James Comedy Productions, who operates the comedy shows at Molly Bloom’s.
On May 17, San Clemente Times attended the show at the local restaurant and bar.

The Comics of the Night

Comics have to be prepared for just about anything the audience gives them, from hospitable laughter to malicious heckling. Traveling long distances over a great period of time can weather the artists.
Dave Nystrom has been on Comedy Central and various other networks. A transplant of Canada, he said he’s worked festivals, night clubs and just about every other way to perform the craft.

“Comedy is something I wanted to do since I was 8 years old,” Nystrom said, adding he’s done stand-up for more than 20 years. “I used to watch this comedy show every evening or I would record it. I would watch a lot of Robin Williams, Eddie Murphy and guys like that.”

Nystrom describes his comedic style as “conversational,” with a series of act-outs or improvisational humor. He said the more he’s performed, the more he’s found his own voice that connects with his audience. Much of his material at Molly Bloom’s was about everyday situational humor, such as being a father or common annoyances.

Jackie Monahan has been on The Eric Andre Show on Adult Swim, NBC’s Last Comic Standing and Showtime’s Comedy Jam. She also co-wrote the movie The Foxy Merkins that was accepted into the Sundance Film Festival.

Matt Kirshen, a comedian from the UK, performs stand-up on May 17 at Molly Bloom's in San Clemente. Photo: Eric Heinz

Doug James, right, the coordinator of the stand-up performances at Molly Blooms, speaks with a colleague on May 17. Photo: Eric Heinz

Matt Kirshen, a comedian from the UK, performs stand-up on May 17 at Molly Bloom's in San Clemente. Photo: Eric Heinz

“I was married to a woman and she made me do stand-up comedy, and I just fell in love with it and I haven’t stopped,” Monahan said.
In 2007, British comedian Matt Kirshen, got his debut auditioning for Last Comic Standing, but he’s been doing stand-up since 2001. He also has seen how difficult comedy can be on the road. He said he was able to get a visa after NBC offered him a spot on the show, which he said helped his prominence as a comic.

“The first few years you’re not really touring; you’re performing at your local venues or pubs,” he said. “For whatever reason, Britain is really easy to travel. A lot of my American friends who do comedy say, when they’re cutting their teeth, they’ll drive for like half a day just to get to the next comedy club. In Britain, it’s so compact.”

Kirshen has performed in many different settings, and he said it’s important to remain flexible when performing in a city one night and a rural atmosphere the next. Currently he’s writing for The Jim Jefferies Show. Kirshen said he came to San Clemente because James invited him.

James did stand-up comedy himself years ago. He said he finally decided to “take the plunge” after working in journalism as a freelancer in Boston.

“It’s a room full of people having a great time, and I provide that great time,” James said. He said more often than not he’s able to recruit comedians through a network of performers. James also runs a comedy show in Huntington Beach.

There is nothing worse in stand-up than seeing hecklers take over a performance. There are times when it’s almost justifiable—a comic comes on stage drunk, stagnant or completely out-of-sorts—but most of the time, it’s disruptive and can lead to some pretty dark results.
“I don’t mind chatting with the crowd a little bit, but if someone’s really disruptive, I try not to encourage them,” Nystrom said.

Monahan said she was once heckled by a drunken audience member at a comedy festival in Montreal. She said she wasn’t able to get enough material into her set, but the festival organizers were impressed by the way she handled the situation.

“I try to fight them (verbally),” Monahan said. “But sometimes I welcome it a little because you can write jokes on the spot. Anyone who is trying to chime in on a set, they really wish they could be up there. You have the mic in your hand.”

“One of the places I started at was called The Purple Turtle, kind of this punk bar in north London, and they have rare, newish acts,” Krishen said. “One night there was a mother and daughter who were so drunk and got aggressive and the police were called, but they were so hammered that they were calling the police as the police were escorting them out. They didn’t realize…that they were the offenders.”

The Craft of Comedy

In his 2009 documentary, Pimpadelic, Kat Williams, a famous comedian who relies on the theme of being an alpha male and flashy patriarch, describes the progress of being a comic with the formula “time plus laughs.” Williams said when he started his career, he would try to get as many laughs in a 5-minute set as possible, then a 10-minute set, 15-minute-set and so forth until he was selling out theaters.
“If you fall into a pattern, where you just press ‘play’ and do the same material, where you’re not feeling what you’re performing…the audience will feel it if you’re not present,” Nystrom said. “I feel as I’ve gotten older, I have a better sense of who I am as a person, and I hope that comes across. I’m just more comfortable on stage now.”

Nystrom said he always encourages people who tell him they want to do stand-up comedy.

“I say go for it because anything that comes out of it will be a positive,” Nystrom said. “As long as you try it, you’ll gain a new appreciation for comedy.”

Monahan said the motivation to do stand-up comedy has to be a personal love with the performance and the will to make people laugh.
Going on the road can be difficult for many comics. Nystrom said he tries to limit his travel as much as possible.

“It can be pretty depressing, and I think that’s why you see a lot of comics end up with substance-abuse problems,” Nystrom said. “I’ve tried to maintain my personal life as much as possible. Family is most important to me.”

Nystrom said he is currently trying to bring his family into the United States permanently, but the family has had problems trying to obtain visas and eventual citizenship.

“You just have to have a sense of adventure and live on the edge a little bit,” Monahan said. “I used to say everybody should do it. Now, not so much, but once you do it, you kind of become addicted to it. Starting out, I got a lot of positive responses, so it just kept me going; if I didn’t get those, I probably wouldn’t do it.”

Monahan said she tries to add in at least one new gut-busting joke in each of her performances.
“Why is the baby a bastard? The baby didn’t do anything wrong. The guy should be the bastard, not the baby,” Monahan said during her set. She said she adds subversive humor that makes people rethink conventions of society.

Monahan’s material is mostly intended for “adult audiences,” tackling issues and pushing the audience to see the world through different perspectives.
Comedians also have to help each other out. James said many of the comics he works with promote their colleagues’ shows. James said if he likes a comic, he’ll invite them to do a show the next night, wherever that may be.