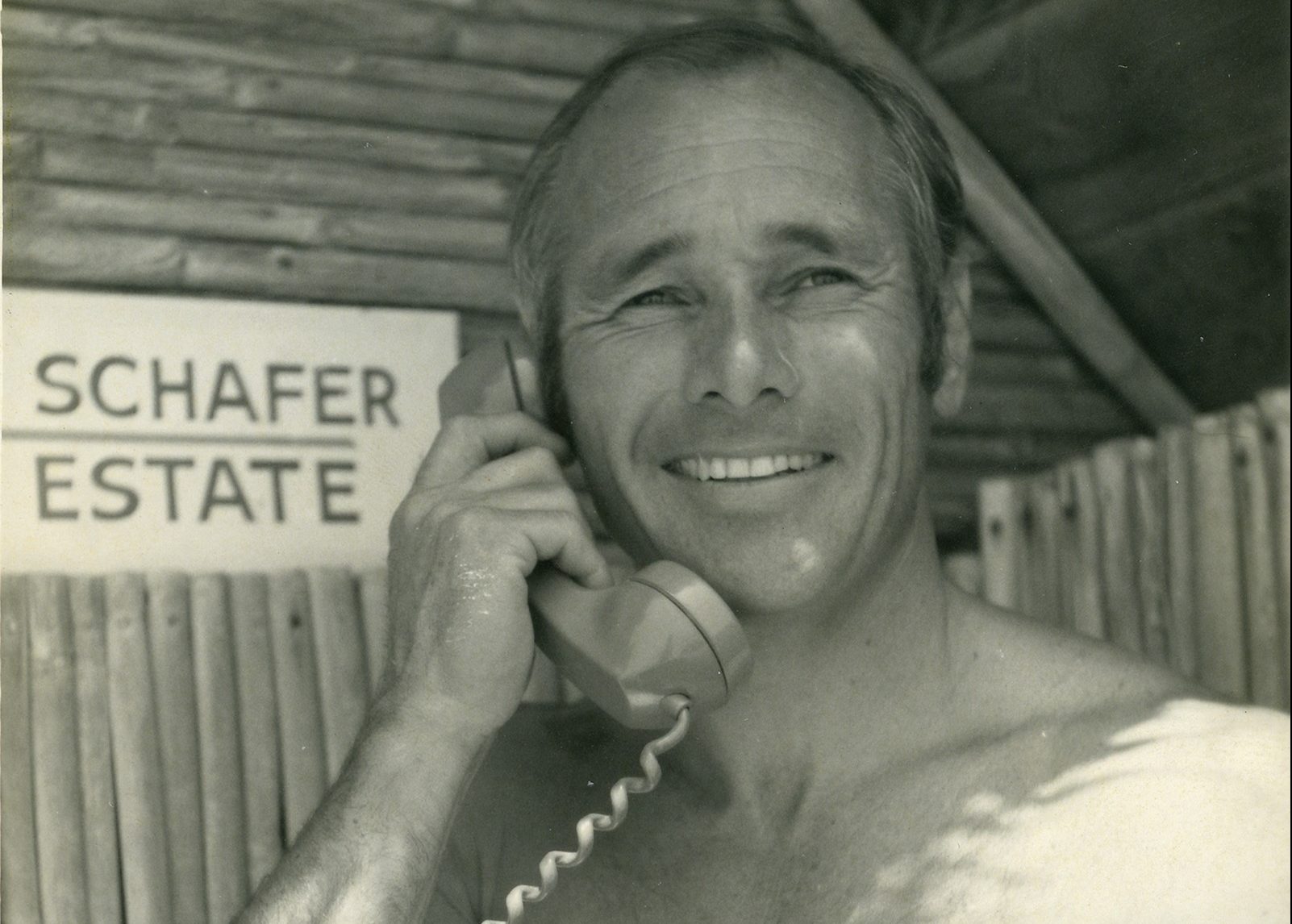 French guards at the 1968 Olympic Winter Games were not amused when a group of Americans came in to film the premier skiers in Grenoble.

Wayne Penn-Schafer, along with surf photographers and videographers seeking the latest in human thrills, risked punishment across foreign lines. They were the shutterbug pioneers before the era of the GoPro and the selfie stick, and the footage took much longer to develop.

“I was a real estate broker for years, and a friend of mine had an office in Dana Point, and we knew a ski film producer who was also a surfer,” Penn-Schafer said. “My friend called me about someone in Huntington Beach who wanted to move to Dana Point. I gathered up a couple houses to show him.”

Wayne Penn-Schafer, who was involved with the start of the southern California surf culture movement, still lives and thrives in his Capistrano Beach home. Photo: Eric Heinz

Wayne Penn-Schafer, pictured in circa 1960, was on the ground floor of the surf culture movement in the mid-20th century. A new book, titled "Indian: The Life of Osage Waterman Wayne Penn-Schafer" has been published on the details of his life. Photo: Courtesy of Joe Dunn

Always having a premier surf break, Wayne Penn-Schafer continues to have extraordinary tales about his life. Photo: Eric Heinz

Surrounded by many beach culture artifacts, Wayne Penn-Schafer has many tales of introducing surf culture to the world. A book about his life, titled ‘Indian,’ is available for purchase and chronicles the early history of the sport. Photo: Eric Heinz

From then on, Penn-Schafer said the man had assimilated into the Southern California surf culture. The two forged a relationship and the man needed another person to help film the Olympic ski races.

At the time, the French government didn’t want foreigners to film their Olympics. In order to pull it off, they had to rent film equipment in Switzerland. They then disguised themselves by growing out beards and saying nothing to the authorities. That’s how lax security was at the time.

“France said they were going to use their own photographers,” Penn-Schafer said. “We contrived a bootleg, so to speak. It was before the Mission Impossible guys. We probably would have gone to jail if we’d been caught.”

Unfortunately, they couldn’t take the film back with them and no copies exist, unless they’re sitting in the catacombs of a French customs exchange material room.

This is just one of the many dramatic stories Penn-Schafer has in his mental vault and newly released adventure and surf-focused biographical book titled, Indian: The Life of Osage Waterman Wayne Penn-Schafer.

The Man, The Myth, The Legend

Penn-Schafer still lives in the nimbus of the 1960s surf culture, where a grass-roofed hut is situated and an outrigger canoe sits as a centerpiece. Inside, he has various trinkets and pieces of art from various cultures of the wave-riders.

“Just like in the early days, we had people who would show surf films and travel around showing different films,” Penn-Schafer said. “It could be a million-dollar business in some cases.”

Shortly after that, organizations started advocating for surf culture.

“The government realized they were going to have to deal with us.”

At the time, the summers of love were in full swing, and surf music was the anthem of beachgoers.

The book Indian: The Life of Osage Waterman Wayne Penn-Schafer is available for purchased for $30 per book (plus postage if outside of South Orange County) by calling author Joe Dunn at 949.496.7899 or 949.370.3971. They can also be purchased by contacting the publisher at 626.793.9796 or by email at hello@prospectparkbooks.com. People may also contact Penn-Schafer himself at pennschafer@gmail.com.

Penn-Schafer went by the nickname “Indian” because of his Native American Osage Nation heritage. It was a different time.

Penn-Schafer said knowing Hobart “Hobie” Alter was a tremendous experience in his life, having been his friend for 40-plus years.

“I first met him in 1950. I looked him up to shape my first surfboard,” Penn-Schafer said. “From then on, we were friends. I bought all my next boards through him. Hobie was working out of his garage in Laguna Beach; he was just a teenager at the time, and his dad—to get him out of the garage—bought a piece of property in Dana Point for about $2,500 where he put his shop.”

Surfing was a “sub-culture” in the 1950s and 1960s, Penn-Schafer said. He said the surfers were viewed as rapscallions and countered the straight-edge norms of the time.

“They were just trying to access surf, and I was at LA City College from 1948-1950. A lot of veterans coming back from the war were surfers,” Penn-Schafer said. “I got started surfing at San Onofre and places like that.”

Penn-Schafer said his favorite place to surf was Trestles and Cotton’s Point. But living in the same area that his family purchased in Poche and Capistrano Beach, he always had a surf break to get his wave fix.

“The sign Poche for the trains is where the beach gets its name,” Penn-Schafer said.

Joe Dunn, the author of the book, said the story of Penn-Schafer’s life was just “too good not to do it.” Dunn is an admitted amateur writer who does it for the love of writing.

“I know Wayne, so I had some time on my hands,” Dunn said. “I researched the background of the Osage people and the treatment they endured by the United States government. That all kind of tied in to make a more interesting story.”

Dunn said he knew Penn-Schafer’s life story from the 1950s on, but his family’s heritage was the most intriguing for him.

“We would typically meet on weekends at Wayne’s yard,” Dunn said. “But I learned that one weekend he took a 2,200-mile roundtrip journey to Mexico by himself, so that’s when I thought, OK, it’s time to write about him.”

When Penn-Schafer returned, Dunn said he wanted to write a biography on his friend. The book took about six months to research, write and publish.

The story of Penn-Schafer’s life, chronicled in the book Indian: The Life of Osage Waterman Wayne Schafer details his life from the beginning to today. It is filled with quotes from notable waterman as well as some who are dear to Penn-Schafer’s upbringing. It also shows a development of the surf world from its humble beginnings to the worldwide phenomenon that it is today. Not wanting to give too much of the book away, it is available for purchase through the independent publishing methods mentioned above.