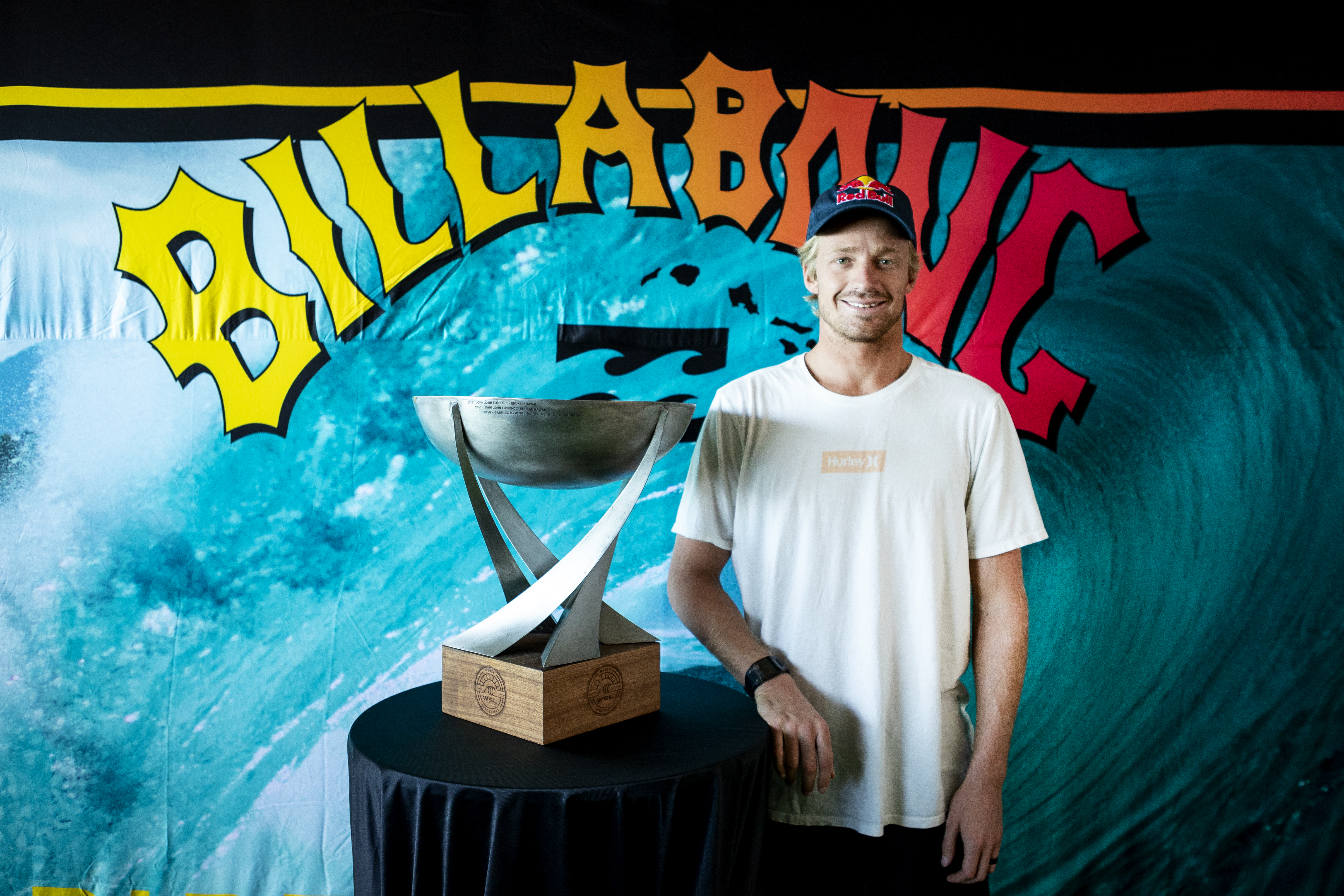 With local surfer Kolohe Andino in the hunt for the 2019 WSL World Title, it all comes to a thrilling conclusion this week with the Billabong Pipeline Masters.

Kolohe Andino will need the best result of his life at the Billabong Pipeline Masters if he is to win the 2019 WSL World Title.

There are currently five contenders for the title, and depending on what happens, Andino—who’s affectionately known around town simply as “Brother”—needs to either finish first or second at the Pipeline in Oahu to accomplish the lifelong goal.

Though Andino was the first American surfer to secure his spot on the 2020 U.S. Olympic team, he is still driven by world title aspirations. Growing up watching champs including Kelly Slater, Andy Irons and Mick Fanning, Andino has worked long and hard to arrive at this level.

“I’d say, for me, a world title is a lot more important than a gold medal,” Andino recently told surf publication Stab Magazine. “It would be rad to win one for my country, but a world title means you’re the best surfer around the world in all conditions all year.”

The son of former U.S. Champion Dino Andino, the junior Andino shows the fruit does not fall far from the tree.

“He’s better than I could have ever dreamt of being,” the senior Andino explained when his son joined the tour in 2012. “But I always tell him, it doesn’t matter how good you are on a surfboard, it’s what kind of person are you.”

Andino’s lived by that advice, growing into an outstanding role model for up-and-coming surfers in San Clemente. His 2019 campaign has been the most successful of his career, defined by disciplined consistency. He started the season off with a runner-up finish at the Quiksilver Pro on the Gold Coast of Australia. He picked up another second-place finish at the Margaret River Pro in Western Australia.

Semifinal appearances in Brazil and South Africa kept him in the mix, and by the time the tour got to Tahiti in August, he was ranked No. 1 in the world. He made the quarters in two European events and is currently ranked No. 5 in the world.

Interestingly, most roads to the title lead through San Clemente. Three of the five title contenders have addresses in town: Andino, Jordy Smith and Filipe Toledo. Another contender, current world No. 1, Italo Ferreira, also has strong ties to the area, designing his boards with local shaper Timmy Patterson and spending an abundant amount of time in the area testing equipment and training.

“Italo’s put the work in, and look where he’s at. It seems like he surfs a lot,” said Andino. “I would like to think we live in a world where people who work the hardest succeed the most. It seems like it makes sense.”

All of those surfers could also appear in the Olympics in 2020, as well. As noted, Andino’s already locked in, as is Smith. The two spots for the Brazilian team won’t be decided until the end of the season, based on their current WSL ratings.

When this story went to press, there was a sizable swell on tap for Pipeline, and it was probable that a portion of the Pipe Masters will have run. A series of large northwest swells are stacking up for Hawaii, and Thursday, Dec. 12, could be especially menacing with Surfline.com calling for potential 18- to 25-foot “maxing” pipe.

This is one of the closest world title races in years, and it’s going to wrap up in heavy surf, just the way it should. The waiting period does not end until Dec. 20, but they may not need that long based on what the Pacific’s doing.

The swell is so big that the WSL is also looking at running their big-wave contest, the Jaws Big Wave Championships, on Thursday, as well. Forecast models are putting the surf in the epic category.

It’s going to be a big week of surfing in Hawaii, and an even bigger week in San Clemente if Andino can win the world title.

Let’s do this, Brother!