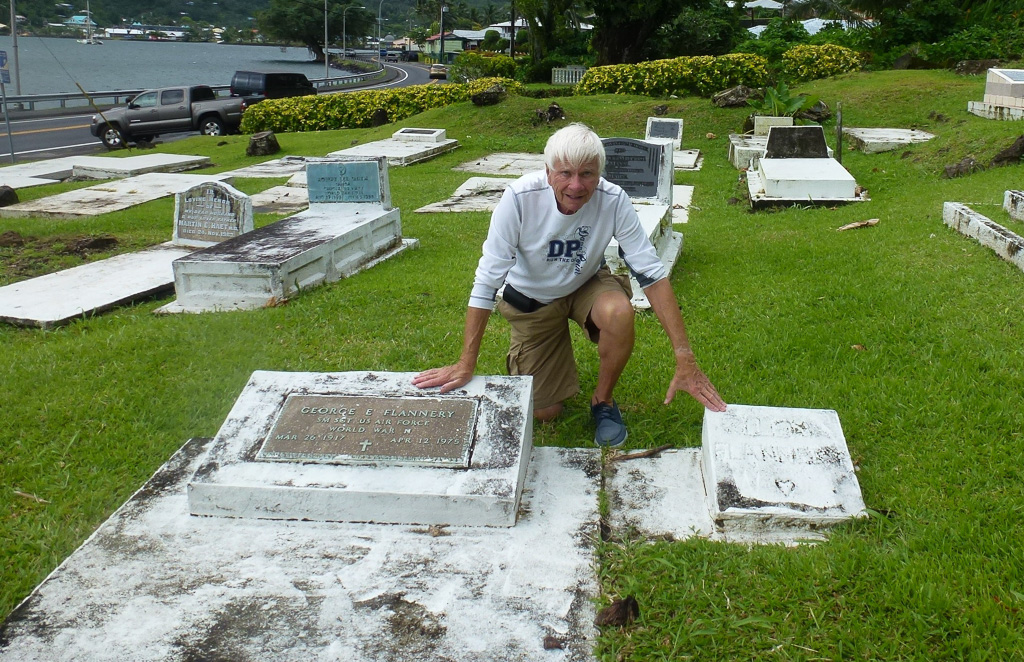 On Life and Love after 50: Mission Accomplished in Pago Pago, American Samoa

My partner, Greta, and I disembarked from the Holland America cruise ship M.S. Amsterdam at 9 a.m. on Friday, Dec. 21, in San Pedro. The ship visited 34 ports and 14 countries in 82 days. The last foreign port visited was Pago Pago (pronounced “Pahngo Pahngo”), the capital of American Samoa.

In visiting Pago Pago, Greta and I had a goal. When Mark Flannery, of Fullerton, read that our ship was stopping in Pago Pago, he emailed that in 1975 his father was buried in the Satala Naval Cemetery in Pago Pago. Mark had never been to the cemetery.

I said to Greta, “Let’s try to find the cemetery where Mark’s father is buried.”

I mentioned our plan to Mark and asked for more information. He wrote, “My father, George Flannery, retired from the Air Force around 1970 and shortly thereafter took a job with the government of American Samoa. He died there. My mother stayed on the island for about five more years before returning to the mainland.

“I wasn’t asking you to look for my father’s grave,” Mark wrote, “but while you are there, I have a small request. Will you see if there is any sign of my mother, Ellen, in the same place? She died in Texas about 25 years ago and her ashes were sent to a friend in Pago Pago, who promised to put her near my father. You are the first people I know who have traveled to Pago Pago since then and, therefore, able to check this for me and my siblings.”

I said, “We know you didn’t ask, but we would like to do this for you. And it will give us a goal to achieve on our day ashore.”
Although not a state, American Samoa is a United States territory that closely identifies with the U.S. The currency is American; the primary language is English; and there is a McDonald’s near the pier where the ship docked. The country includes five islands and has a population of 180,000 people.

American Samoa was a crucial military base for the U.S. in World War II. The country has the highest rate of enlistment in the United States military services of any state or territory. Former NFL greats Junior Seau and Troy Polamalu are from American Samoa.

As we sailed in, you couldn’t help but notice how green the vegetation is. The island gets lots of rain. It’s a beautiful place.
Located on the earthquake-prone Pacific Ring of Fire, American Samoa suffered a terrible tsunami after a major earthquake in 2009.

Mark did research that helped us. He contacted an American Samoa government official about the cemetery and the location of George and Ellen Flannery’s gravesites. The official sent pictures, which helped me see what the cemetery looked like from the road and where the graves were located.

We were at the cemetery in five minutes. We paid the driver two bucks.
We found the markers immediately. Greta placed the gardenia on George’s marker. I went into the adjacent jungle and picked a tropical red flower for Ellen’s marker. We spent an hour there taking pictures. Our mission was complete—except, of course, to email the photos to Mark when we got back to the ship.

Mark expressed his appreciation for the effort Greta and I had made and for the photos I emailed to him.

Update
On New Year’s Eve afternoon, Greta and I met with Mark and his significant other, Donna Harwood, at Harpoon Henry’s in Dana Point.

Greta and I will never forget our day in Pago Pago, American Samoa. It now has a special meaning for us.