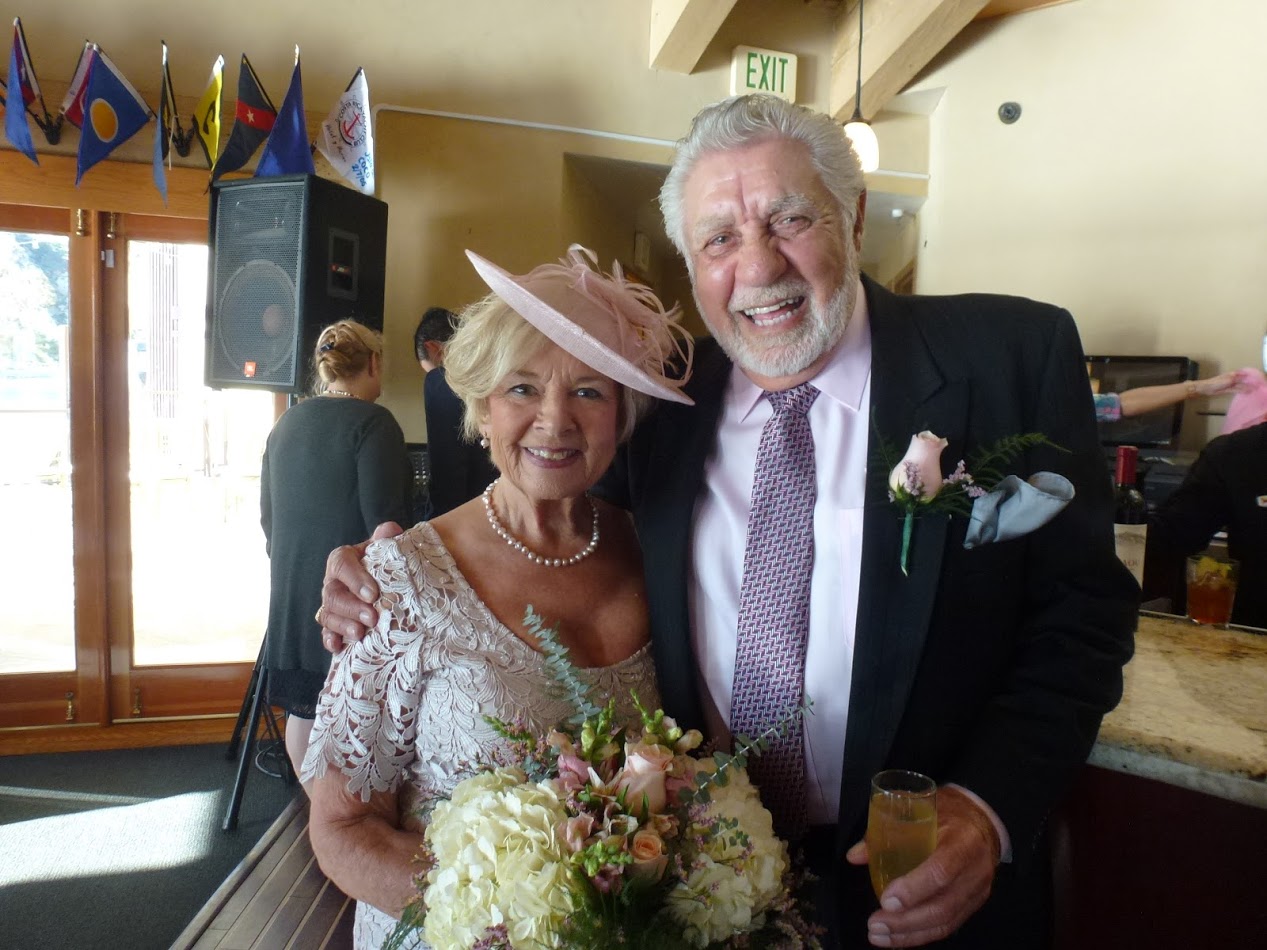 On Life and Love after 50: Never Too Old for Romance and Marriage

In 2001, Chris Anastasio found himself divorced after a 15-year marriage. He was 68, and he had no idea what to do.

A man cleaning the carpets in Anastasio’s Dana Point home knew that he enjoyed dancing. The man suggested Anastasio become a dance host on cruise ships. Before long, Anastasio was enjoying all-expenses-paid cruises around the world and dancing every night.

Anastasio said, “The rule on the ships is a dance host cannot have any kind of romance while on a cruise, but he can get a phone number or email address.

“I started dancing at sea in 2003. A year later, I was on a 36-day Caribbean cruise when I met Tina. Her husband had passed away 18 months earlier. I have danced with a lot of women over the years, but when I danced with Tina, I knew there was something special about this lady.

“Although Tina was from England, I was interested in getting to know her. She gave me her email address. She got off the ship on the seventh day of the cruise. I told her I would email her when I finished the cruise, which was a month later.”

Anastasio said the email address he received from Tina was no longer valid. He had a friend who lived in England track down Tina’s phone number. Anastasio said, “I was so excited about contacting her, I forgot about the time-zone difference.”

Tina chimed in: “After 30 years of marriage and at the age of 61, facing life alone, I thought my enjoyment in life was behind me. Eighteen months later, friends insisted I take a cruise with them to the Caribbean.

“When I returned to England, I did not know if Chris would contact me. My phone rang at 3 a.m. I was excited to hear from Chris. I didn’t know I had given him my old email address by mistake. We started emailing and calling. After three months, Chris said we should get together.

“We decided to meet in Florida. My kids thought I was crazy. We spent a wonderful seven days together.”

And thus, one of the longest long-distance relationships began: 5,419 miles between England and Dana Point. That was in 2004.

Anastasio and Tina have been seeing each other ever since. Anastasio would spend three months in England and Tina would spend autumns and winters in San Clemente, to where Anastasio had moved. They have taken many, many trips together.

A few years back, Anastasio said to me, “There is a lot of trust in this relationship and trust is what makes it work for us. Friends always ask if we plan to marry and live together. Well, that doesn’t make much sense. We get along great, and every time we get together it’s like a honeymoon.”

Also a few years back, Tina added, “During our years of being a couple, we’ve had to say a lot of goodbyes. Those times are the hardest.”

Now, in 2017, this long-distance relationship has changed. Anastasio, 83, and Tina, 76, won’t have to be saying those ‘good-byes’ anymore.

On Sunday, Feb. 12, family and friends watched Anastasio and Tina exchange wedding vows on an outdoor deck at the Dana Point Yacht Club. Yachts, kayaks, stand-up paddle boards and walkers passed by during the ceremony.

My partner, Greta, and I were honored to be on the guest list. At the reception, each table had a centerpiece that featured both the flag of England and the United States.

Because Anastasio volunteers his time dancing with the women residents of the Villas by the Sea, an assisted living and retirement facility in San Clemente, he has developed many friendships there. He also plays Santa Claus and the Easter Bunny for the residents.

At the table where Greta and I were seated, the owners of the Villas, Paul and Aileen Brazeau, shared stories of friendship and kindness about Anastasio. Aileen reminded me that she and I had been introduced 25 years before.

Also seated at our table were Aileen’s friend, Ben Alvarez, and his woman friend, Stacy Adams. Ben told me his daughter Sunny worked at my Dana Point deli. “Sunshine,” her true name, was indeed sunshine, a sweet young woman, who was a pleasure to have as an employee in 2004-2005.

Seated next to Greta were Allan and Dee Spriet of Mission Viejo, whom we had met at a mutual friend’s home several years prior. The world is indeed small.

Tina’s family was represented by her daughter, Louise Dowson, and granddaughter, Isabelle Dowson, who had flown in from England.

When Greta and I got home, we agreed that the wedding was one of those intimate, unique gatherings that warm your heart and will never be forgotten. Tina is indeed an English rose.

She and Anastasio were so cute together. Their kids kept clinking silverware on the water glasses to make the couple kiss. Anastasio finally said, “If you do that one more time, I’m going to stand up and make a half hour speech.” That stopped the glass tapping.

Anastasio and Tina provide hope to senior singles that not only is finding love possible in our later years, but love can also endure distance and time.

Tom Blake is a Dana Point resident and a former Dana Point businessman who has authored several books on middle-aged dating. See his websites at www.findingloveafter50.com; www.vicsta.com and www.travelafter55.com. To receive Tom’s weekly online newsletter, sign up at www.FindingLoveAfter50.com. Email: tompblake@gmail.com.