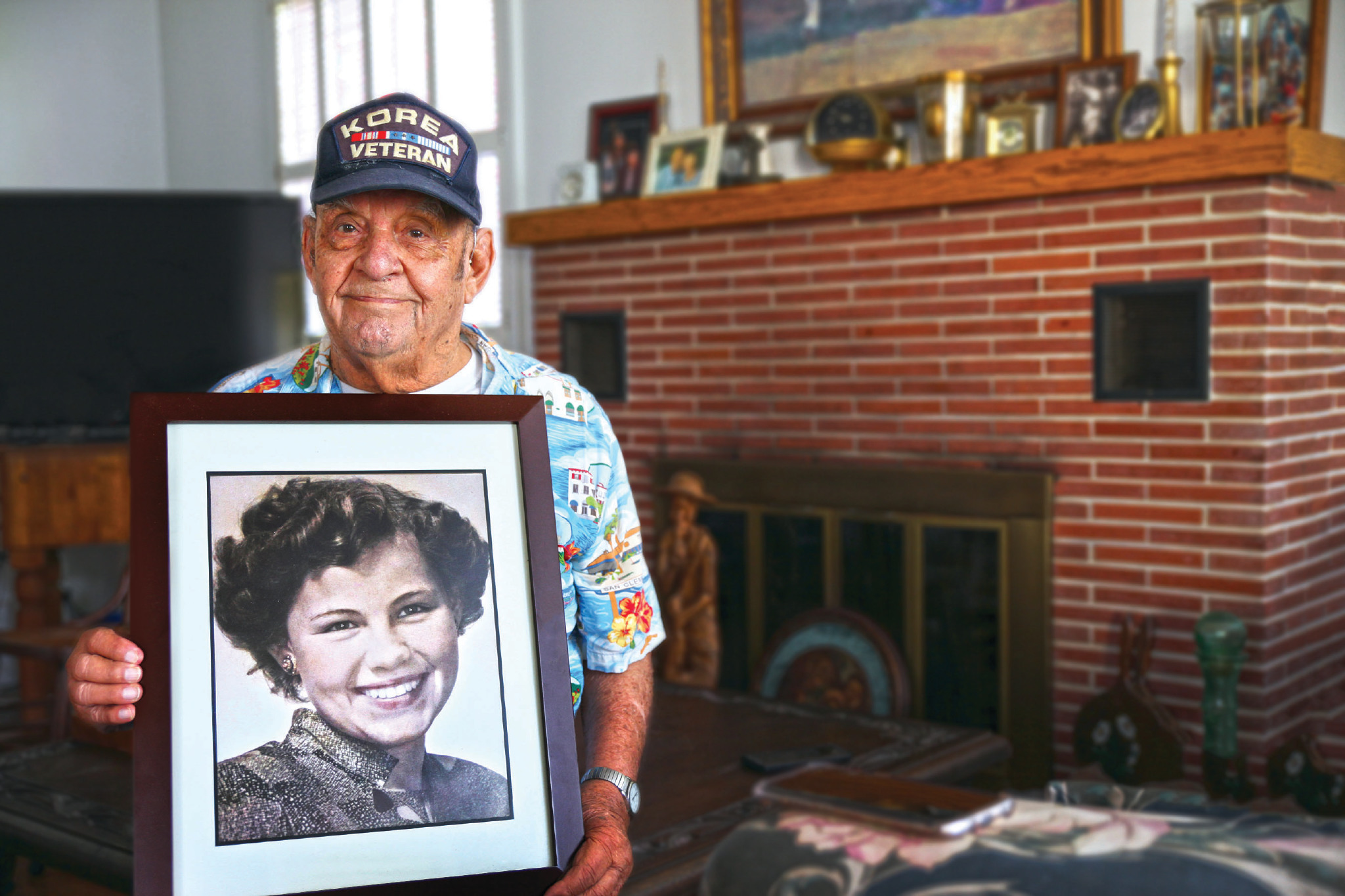 Two months before the stock market crashed in 1929, signaling the beginning of the Great Depression, a young San Clemente couple welcomed their third child, Joseph Llamas, into the world.

Llamas, who goes by “Joe,” is recognized by the city as the first documented baby boy born in San Clemente.

Described by his youngest son as “a funny man who is sharp as a tack,” Joe has lived a full life and was happy to share his story and memories with the San Clemente Times.

In 1927, the year before San Clemente was incorporated as a city, Joseph’s parents—Jesus Llamas and his wife, Reynalda, along with their young family—relocated to San Clemente from Mexico.

Early Years and the Great Depression

Wearing his black Korea Veteran ball cap and an Ole Hanson beach-themed San Clemente shirt, Joe recalls what he knows about the day of his birth.

“I was born on down by the beach in a tent,” he said, with a smile that fails to hide his humorous nature.

Joe’s dad drove a team of mules in town, which was an agricultural setting back then.

Young Joe flunked the first grade at the only elementary school in San Clemente, because he couldn’t speak English.

He remembers times were tough. “When you had a nickel, you were rich,” he said.

As a kid, Joe picked tomatoes for 10 cents an hour at a farm where the Outlets at San Clemente are now located. He would get paid 80 cents in coins at the end of the day.

“On Saturdays, my older brother and I would go down to the theater in San Clemente. There used to be a service station (Shade Tree Auto) there, where we’d go in and get a hamburger for 10 cents, a soft drink for a nickel and still have a dime to go across the street to the movie house. When we got home, we’d still have 55 cents left.”

In April 1942, five months after Japanese planes had attacked Pearl Harbor, Joe was in the theater when the air raid siren went off.

“In those days, you had to stay wherever you were when the sirens went off. We happened to be in the theater, so we stayed till the end and everybody just went to sleep there. You couldn’t leave till it was all-clear.”

Back then Joe, said, “Everything that we did was for the war effort.”

“When you went to the store, they had the price on there, plus the rationing stamps that you had to provide. The blue ones were (for) canned goods and stuff like that. The red ones were (for) meat and dairy products. Since we used to raise our own chickens, my Dad used to trade the red ones for the blue ones.”

But Joe and his friends had their fun, too.

“As kids, we used to go down to the swimming pool, but we called it ‘the plunge.’ It used to cost a nickel to get in, and there were times we couldn’t afford it.”

When they had no money, the kids would jump in the pond that was once across the street from Max Berg Plaza Park. One day, he and his friends ditched school and drove up to Hollywood to see Jane Russell in The Outlaw.

“I mean things were bad, in a sense, but we survived,” Joe said. “We survived and did the best we could.”

Serving in the U.S. Navy and Korean War

Joe graduated from Capistrano Union High School and in 1948 joined the U.S. Navy, where he served for four years. During the Korean War, Joe was stationed aboard the USS ORLECK DD-886, a highly decorated Gearing Class Destroyer used during WWII, the Korean and Vietnam Wars, as well as the first Gulf War.

As a Radioman Seaman, Joe did combat patrolling between the Island of Japan and the coast of Korea for eight months.

He recalls a time when their ship drifted through the Sea of Japan, and as it passed a Russian cargo ship on its way back home, the Russian boat’s captain didn’t “dip his colors” to the U.S. ship, a disregard for the superior country at the time. The U.S. captain told his crew to pull the ship around and “show them they mean business.” Within seconds, the Russian flag was lowered to half-mast until the Destroyer  moved slowly past.

“Having five-inch guns pointed at their ship is pretty intimidating,” Joe said.

As an interesting aside, he admitted, “I was in the Navy four years, and I don’t know how to swim.”

After he left the Navy, in 1952, Joe met his wife, Nancy, who was from Wisconsin. He was only 21, and she was 17. The two were married for almost 64 years in San Clemente, and together they raised three children: Karen, Steven and John. After the war, Joe worked as a union plumber and earned a reputation around town as the best in the business. Joe and Nancy paid $35,000 for their house. Their children all graduated from San Clemente High School. Joe is now a proud grandfather.

“I want you to know, I’m a great, great grandpa. Five generations,” he said.

Joe’s had the same phone number (a landline) since 1948, when the number used to be simpler: “H5455.” That was also the year he got his driver’s license.

“Believe it or not, this old man has never gotten a ticket,” he said.

He remembers when “horses ruled this town” and “all the buildings prior to the war had to be made with white stucco and red rooftops.” He also remembers how things changed after the freeway was built and when Avenida Barcelona was the “it” street back in the day.

Joe remembers when President Nixon moved to town and the Cotton Estate.

The 89-year-old has kept one book hidden from the rest of his family: an original copy of The Story of San Clemente, by Homer Banks. Another keepsake, The Memoirs of Richard Nixon, is made out to “Joe and Nancy – With best wishes,” signed by Richard Nixon in February 1979. The book was given to the Llamas couple by Pat Nixon’s gardener, Mr. Garcia, who did garden work for everybody in town.

Present Day and a Birthday Celebration

“My dear wife, she never wanted to leave San Clemente,” said Joe. “When she died two years ago, she had her body cremated. I still got her ashes. When I die, I’m going to get cremated myself, and we’re both going to get scattered off the shore of State Park, you know. Come home again.”

When Joe turns 90 on Aug. 19, he plans to celebrate with his family, and maybe hit the casino.

According to Joe, there are only five original San Clemente families left in town.

“I was thinking of all the kids in grammar school . . .” said Joe, who attended Las Palmas. Sitting in his living room on West Avenida Alessandro, surrounded by pictures of his family and memorabilia from the war and past times, he taps his memory for names.

“I’m the only one left in San Clemente,” he said.

Editor’s Note: This story has been updated to correct an error. Joe Llamas graduated from Capistrano Union High School, not San Clemente High School as the article previously stated. Also, Llamas was one of 14 children not, 13.