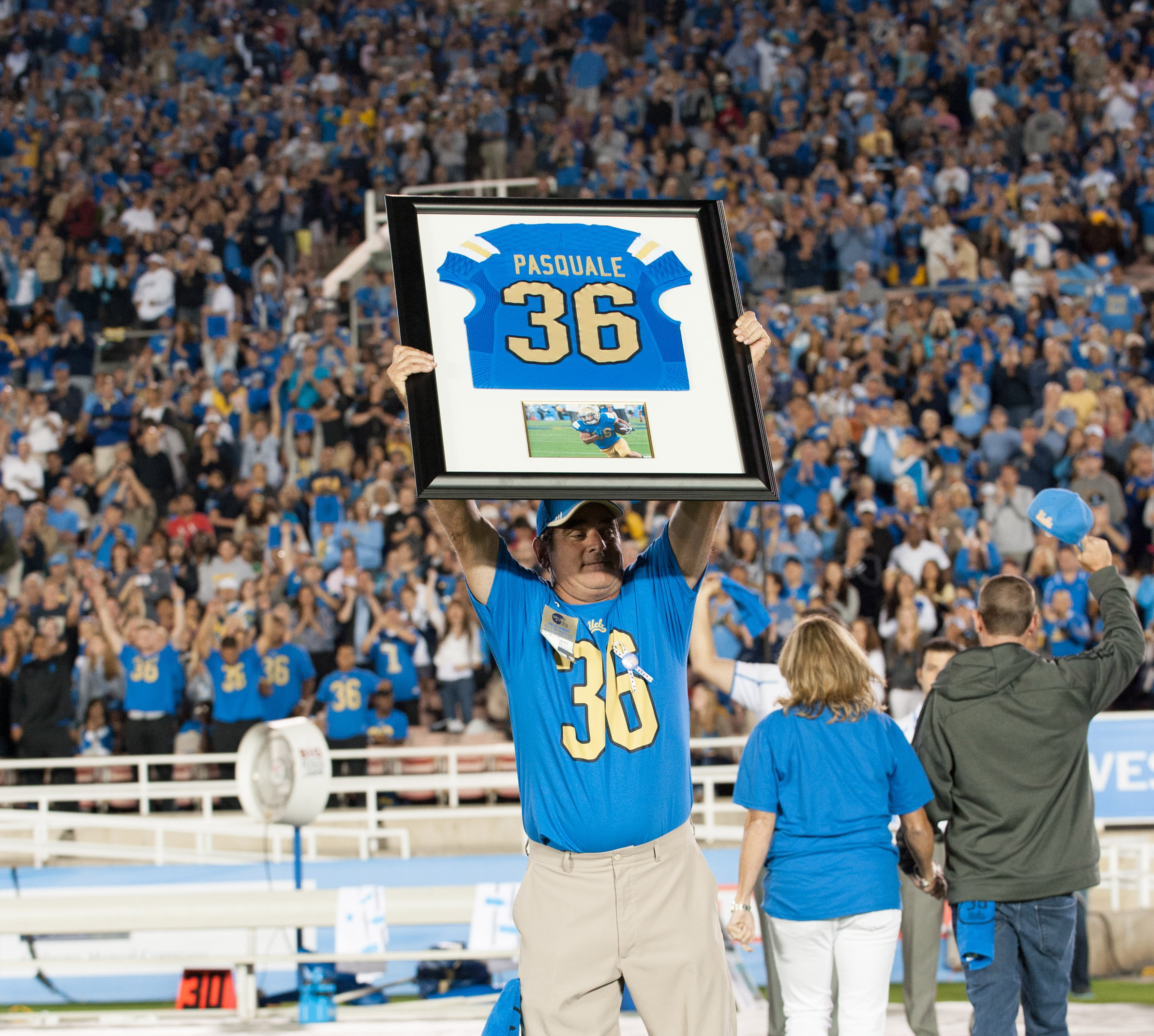 One year later, the Pasquale family is finding new ways to remember the son they lost

Laurie and Mel Pasquale still get the calls, the reminders telling them the impact their youngest son, Nick, had on people’s lives.

“There always seems to be some story, some impact or situation they refer back to,” Laurie said. “Everybody continues to reach out.”

“It’s overwhelming and it continues to go,” Mel said. “It’s surreal some days, to be honest with you.”

Nick Pasquale was killed Sept. 8, 2013, while crossing Camino De Los Mares on the way home from a party. The subsequent outpouring of grief reached across the city and across the country, as Pasquale, a walk-on wide receiver at UCLA, was honored by his Bruin and former Triton teammates for the remainder of their respective seasons.

That tribute continues this year. The Tritons’ new uniforms include Pasquale’s initials on the front of the jersey. UCLA’s helmets will have a decal with Pasquale’s number 36. The Pasquales have also heard from former teammates playing at other schools who’ve changed their jersey numbers to honor their son.

The ongoing legacy of Nick, however, may come in the foundation that bears his name. Set up by friends and well-wishers in the days following his death, the Nick Pasquale Foundation will look to honor students who shared similar traits, in terms of working hard and making a quiet but significant impact in the community.

Getting the organization off the ground has been a significant part of the Pasquale’s last year.

“It was a process trying to learn everything,” Laurie said. “When it was presented, it was a blur, a shock. We didn’t necessarily know what we were getting into or signing up for.”

Much of that time was spent doing practical things that have to be done at the start of any nonprofit. Tax identification numbers needed to be secured and nonprofit status guaranteed. That didn’t happen until June, too late to provide a scholarship or award for a graduating student from the class of 2014. However, Laurie said funds did go to help pay for the Tritons’ new uniforms as well as back into the UCLA football program for a new facility.

“Now we’re figuring out the application process as to how to give back for the senior awards at the high school,” Laurie said. “We’ve been learning the ropes, but we’ve got a lot of people pitching in and helping.”

Much of that help has come from UCLA head coach Jim Mora and his wife, Shannon, who helps run Mora’s Count on Me Family Foundation. In particular, Shannon was educating the Pasquales on the ins and outs of running the foundation.

The foundation is hosting its first major fundraiser this Sunday. The Live Like Nick 5K Run/Walk at San Clemente High School is open to all ages and proceeds from the event will be given directly to the foundation, which provides financial support to aspiring athletes and charitable groups.

The idea for the event was presented to the Pasquales by San Clemente Sports Hall of Fame member Mary Mulligan-Crapo, a childhood friend of Laurie’s. One of Crapo’s children, who grew up idolizing Nick, actually came up with the idea at a father/son Bible study group.

The Pasquales hope to be able to give out their first award at this year’s senior awards at SCHS. The family, in conjunction with some of the coaches at the school, are looking to set up the criteria for the scholarship by the end of 2014, to allow students to apply in early 2015. While those are being set up, Mel said he’s asked coaches and teachers to keep an eye on any student who shows the perseverance and willingness to help others they feel Nick embodied. Eventually, the scholarship may move beyond SCHS.

Knowing, but Not Knowing

Mel and Laurie live in Forster Ranch. As such, each day, as they go about their errands in San Clemente, they usually have to drive past the intersection of Los Mares and Calle Nuevo, where the accident took place. A memorial for Nick is still at the site.

“For me, it’s now a comfort,” Laurie said. “In the beginning, it was really hard to see it every day. Then after about a month, it got cleaned up and all of a sudden, it was gone. When it started up again, I thought, ‘Oh good, people care.’ It was kind of back and forth for me. Now I stop occasionally, if I’m having a bad day or if I see something different. The only alternatives are to embrace it or move.”

“It’s horrible, I hate it,” he said. “I haven’t been there. But Nick was strong, and I have to be strong like him.”

Some who didn’t even know Nick or the family are also reaching out.

“Just a few weeks ago, on our front porch was a super-sweet handwritten note from an 8-or 9-year-old girl. There were hand-picked flowers tied with a hair tie left on the front porch. The note said, ‘I’m sorry about your son, I’m so sorry. And I’m sorry the flowers are pink and not blue, but I picked them myself.’ Just really sweet. And from a girl who obviously never knew him.”

Students at the high school recently refurbished a memorial set up there with Pasquale’s high school number, 10, and added his initials, facing the field at Thalassa Stadium, that had been getting washed out.

“There’s just, constantly, people who are being so supportive,” Laurie said. “People are still refreshing the site, leaving candles or flowers. There’s still posts on everybody’s Facebook or Instagram. It’s also the heartfelt personal things we found out that Nick did for people, about the kind of friend he was to people.”

Mel said the aftermath of the accident showed him the true impact his son had on people.

“We’re going to keep Nick’s legacy alive,” he said. “He touched so many people. We’ve gotten thousands of letters. We knew, but we didn’t know.”

A Wake Up Call

“It changed my life forever,” A.J. said. “It made me reprioritize what’s important in life, to not let things out of my control bother me.”

A.J. said that at the time of the accident he was working at a digital marketing company in San Clemente. While he had a promising future there, he wasn’t totally satisfied.

“I wanted everything in the blink of an eye,” he said.

After the accident, A.J. left the job. Like his parents, he suddenly was driving by the memorial every day as he tried to figure out what he wanted to do. In February, however, UCLA offered A.J. an internship opportunity with the program that had inspired, and in turn been inspired by, his brother.

Now, he works as a quality control assistant for the team. As part of his duties, he evaluates film of potential recruits, coordinates unofficial recruiting visits and helps assist with day-to-day operations of the Bruin football team.

But, like his parents, he’s still reminded of his brother each day.

“There’s constant reminders, but even when I’m not reminded by someone or something, I’m thinking about him,” A.J. said.

The event is limited to the first 1,000 runners who register, but it can be done at the event Sunday. To sign up, visit www.livelikenick5k.com. Some of the funds raised will also support the SCHS Athletic Department.