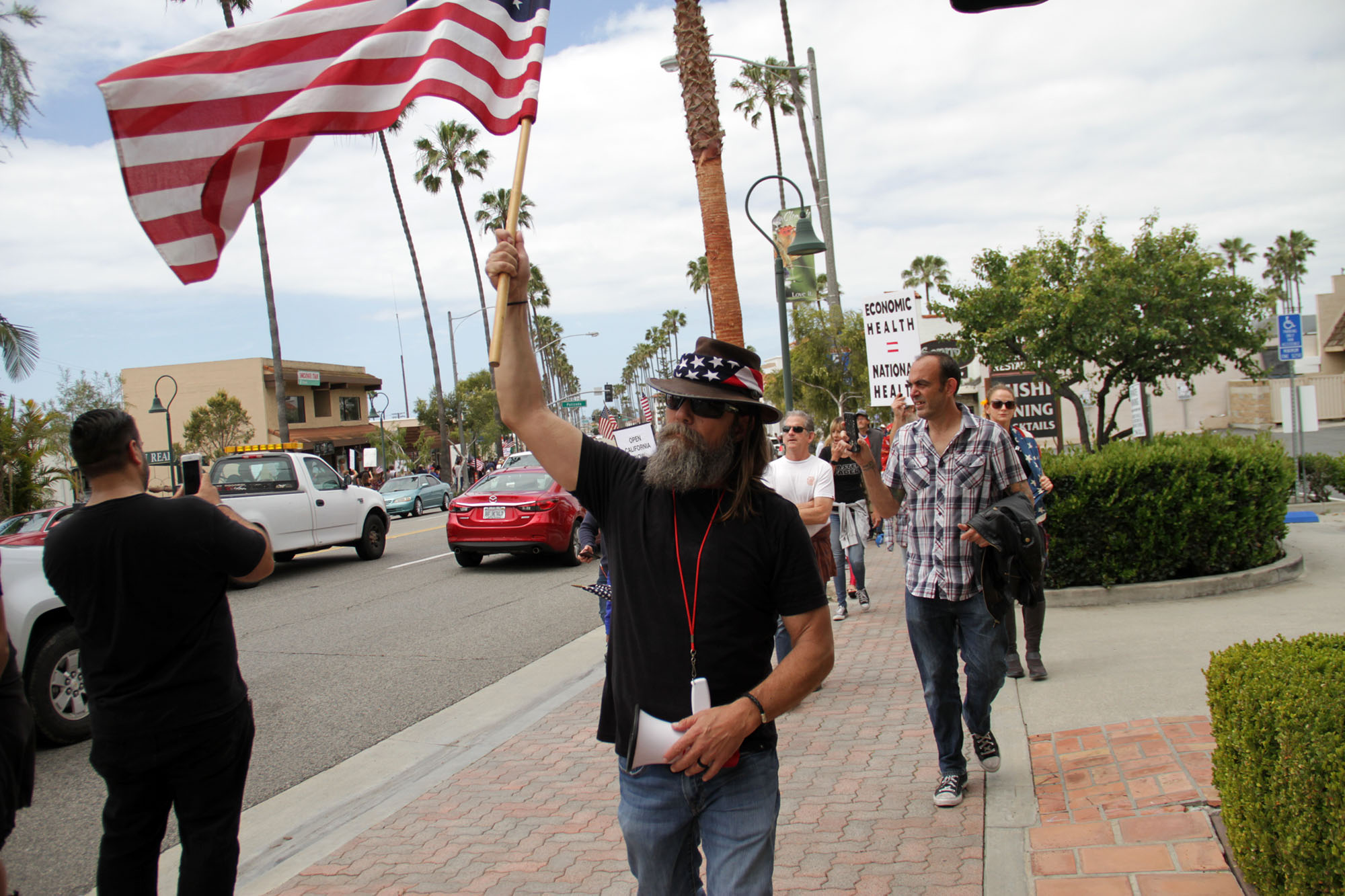 Other than to confirm the address of the apartment that was searched, the FBI would not disclose the homeowner’s identity. However, voting records and neighbors in the complex on Thursday, Jan. 28, identified the apartment as belonging to Hostetter.

Hostetter, a staunch advocate of former President Donald Trump and vehement opponent to the state’s stay-at-home orders, has been the face and voice of several anti-lockdown protests in Orange County, including a mask-burning rally near the pier this past November.

Hostetter this month attended the pro-Trump march in Washington, D.C., where rioters stormed the Capitol in an attempt to overturn President Joe Biden’s Electoral College win, resulting in the death of five people.

According to the FBI, agents were seeking evidence at the San Clemente apartment in relation to an ongoing criminal investigation, but couldn’t comment further on the matter nor confirm whether it was tied to the Capitol riot. No arrests were made related to the search.

As of this posting, Hostetter, who is facing separate criminal charges in connection to a demonstration he organized against the fencing at the Pier Bowl parking lot this past May, did not respond to calls seeking comment.

On the day of the march, Hostetter shared videos and photos of the protest and resulting riot to his American Phoenix Project account on Instagram. Those posts, including a video of the riot that appears to be taken from the balcony of the Capitol building, have since been removed.

In the caption for that video, which has been circulated by other local groups, Hostetter wrote that “thousands proudly stormed the cess pool of corruption while hundreds of thousands cheered them on (sic).”

In another removed post on Instagram, Hostetter addressed his followers who had inquired about his whereabouts during the riot, letting them know he was safe.

“We did our part, we are proud of our fellow patriots, our President and our great country,” he wrote. “This was the ‘shot heard ’round the world!’ … the 2021 version of 1776. That war lasted 8 years. We are just getting warmed up.”

The search comes on the heels of reports that FBI agents in Southern California arrested individuals suspected of taking part in the attempted insurrection at the U.S. Capitol on Jan. 6, as well as searched the home of Russ Taylor, a known associate of Hostetter’s.

According to a report from Los Angeles Times, FBI agents on Tuesday searched Taylor’s Ladera Ranch home, where an unknown number of weapons were reportedly found. Taylor, a fellow far-right activist, has organized protests with Hostetter and accompanied him in Washington.

Like Hostetter, Taylor also posted videos of himself to social media marching toward the Capitol the day of the riot. The L.A. Times reported that Taylor has used his social media to acknowledge his participation in the rally, while denying he entered the Capitol building.

Since the Jan. 6 protest, Hostetter’s wife and Vista Del Mar Elementary School teacher, Kristine Hostetter, has also come under fire after parents saw the fourth-grade educator appear in other social media posts Taylor and her husband shared of the march.

The student-led group CUSD Against Racism have used Hostetter’s and Taylor’s posts to call on the Capistrano Unified School District to investigate whether the teacher took part in the riot at the Capitol.

Hostetter’s protests and rhetoric toward the lockdowns and the 2020 presidential race have garnered national media attention, as just this week, a Washington Post columnist wrote an op-ed about the former officer of the law turned yogi.

“… few if any of the other protesters who descended on Washington offered Hostetter’s combination of law enforcement and New Age-y mysticism, his presence at the rally illustrates the surprising, perhaps even unnerving width of hardcore Trump support,” Washington Post columnist Radley Balko wrote in his piece.

Over the past year, Hostetter, a former La Habra police chief, has staged marches and protests in San Clemente, objecting to stay-at-home orders and safety restrictions imposed to stem the spread of the coronavirus.

At one of his demonstrations, where he and multiple others attempted to tear down the fencing the city had placed around the Pier Bowl parking lot, Hostetter was arrested on suspicion of resisting arrest, refusing to disperse and trespassing.

Hostetter now faces criminal charges for those three misdemeanor offenses that the Orange County District Attorney’s office filed with the court this past July.

Ahead of the presidential election this past fall, Hostetter also organized a pro-Trump rally on the beach by the San Clemente Pier, attracting hundreds who came out to support the reelection of the former President.

During those demonstrations, Hostetter has used such terms as “army” and “ground troops” to describe Trump’s supporters, who, he perceives, are fighting in a “war.”

“Our army, led by our fearless leader, President Trump, will win this war,” Hostetter had stated during a speech at his Oct. 3 Trump rally. “Make no mistake about it, we are at war. And this war we will win of that there is no doubt. There is no choice, no alternative whatsoever other than complete and total victory in this war.”