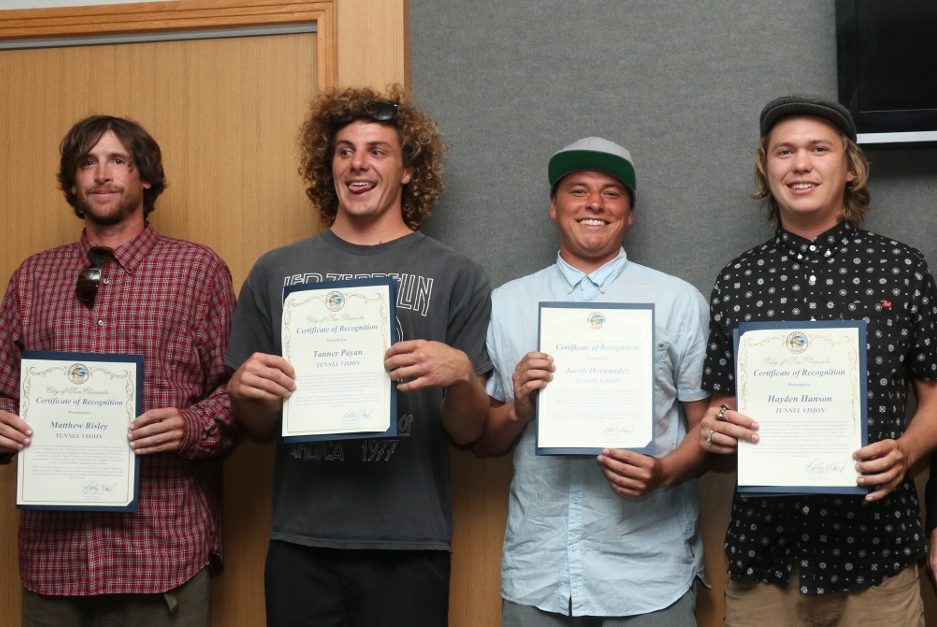 Tunnel Vision, a rock band based out of San Clemente, recorded a music video at the top of Tanzania’s Mt. Kilimanjaro in February in an effort to bring more awareness to ivory poaching around the world.

Tunnel Vision members Hayden Hanson, Jacob Hernandez, Matthew Risley and Tanner Payan, as well as Daniel Delacruz of Slightly Stoopid, who performed with them, were recognized at City Council on Tuesday night.

According to the band members, they set world records for a live-stream performance at the highest elevation and the highest-elevated saxophone live-stream performance.
Band members said performing at the summit of the mountain was very difficult, due to the thin air at almost 20,000 feet and having to schlep all the equipment up with them. However, they said the sound from their performance carried all the way down to the base camp, and people told them they could hear the music from the base.
“We played four songs at the summit, and we did it to raise awareness of the poaching of elephants,” Hernandez said during the meeting. “It was just a miracle that we could get everything up there. Every step of the way down.”

Elephants are being killed at a rate of 40,000, or 3 percent, of their population each year, according to a 2014 study by the Proceedings of the National Academy of Sciences of the United States of America.

“It was kind of brought to us by our record label, Whiskey Barrel Records, and the idea behind it is that we’ve always given about 40 percent of the proceeds to foundations,” Hayden said. “We’re working with the George Lopez Foundation and Tom Maxwell, and he kind of showed us what was going on. We were really touched by it, and it’s pretty brutal what’s going on there in Tanzania. We were just really bummed out, and people are losing their lives trying to protect these elephants, and we want future generations to see these animals.”

The band’s next performance in San Clemente is scheduled for Sunday, Aug. 13, at the San Clemente Fiesta Music Festival. The band will be releasing a single song in the near future, and the proceeds from sales on iTunes will be donated to the Leonardo DiCaprio Foundation, which makes efforts to combat climate change and help preserve animal species. Hayden said they will consider going to the Himalayan Mountains to do another fundraising opportunity for their philanthropies.

“This whole thing was so crazy that we’re just in chill mode right now,” Hayden said, adding they hope to have a new record out by July.