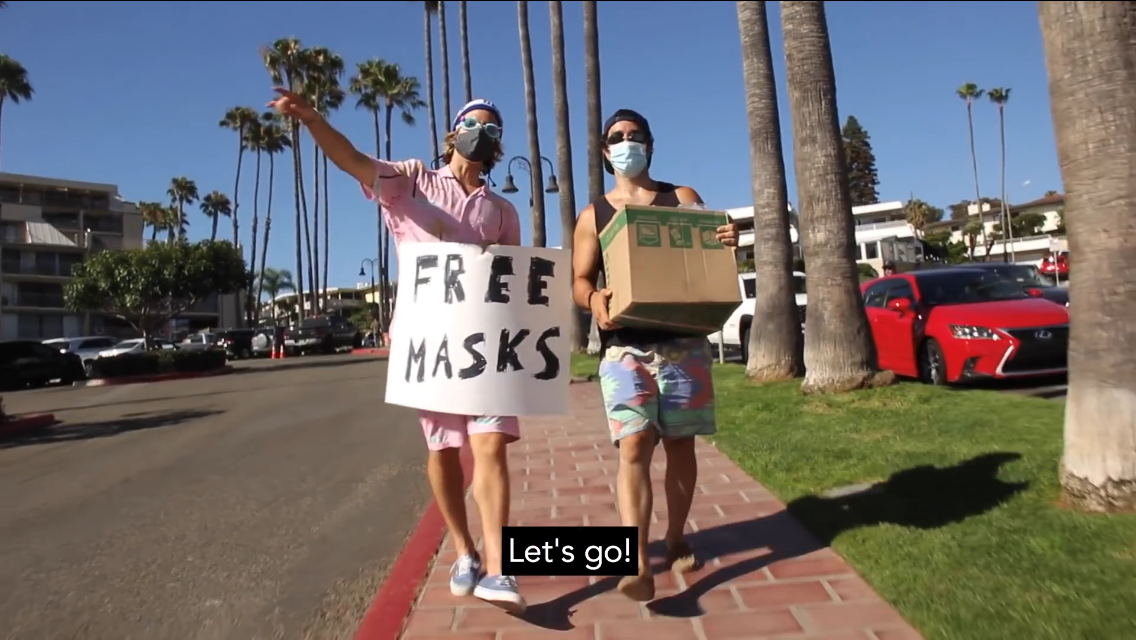 The Chad Goes Deep comedy team recently returned to their hometown of San Clemente where they continued their latest mission—handing out free face masks to beachgoers amid a “mask shortage.”

In a new viral video posted to the Chad Goes Deep social media pages on Monday, July 27, the pair of local comedians, Tom Allen and JT Parr, looked to distribute complimentary face masks at the Pier Bowl where they were met with some resistance.

“We heard that there’s a shortage on masks,” Allen said, donning his signature bright pink button-up-and-shorts ensemble while holding a sign that read “FREE MASKS.”

“The supply chain for masks has been interrupted and we’re here to fill that gap to people in need,” added Parr, while carrying a box of face masks

“To make them happy and healthy,” concluded Allen, who goes by the pseudonym “Chad Kroeger,” a surfer bro, in the Chad Goes Deep videos and podcasts.

The Chad Goes Deep team began to gain notoriety in San Clemente back 2017, when “Chad” and “Bhodi,” played by Spencer Kalendar, appeared at a city council meeting to advocate for a statue to the late Fast and Furious actor Paul Walker. Later they returned pleading for a carving of Walker’s image on a coastal bluff.

Since then, Chad Goes Deep has taken their antics to neighboring city councils where they’ve given similar impassioned pleas for a Walker statue as well as for an additional day off for the Fourth of July holiday.

Last week, Variety reported that Allen and Parr are developing an animated series for the streaming service Hulu. According to the trade, the untitled project will focus on a pair of surfer bros born to Greek gods in Ancient Greece.

Most recently, Allen and Parr visited Huntington Beach where the Chad Goes Deep team first attempted to solve the “mask shortage” by handing out face coverings in the coastal town.

But much like those in Huntington Beach, some in San Clemente weren’t receptive to taking a free mask, as the roughly five-minute-long video continued to highlight the unwillingness of those who believe face masks are useless during the coronavirus pandemic.

“Take your mask off, it’s bad for you,” one man told the two, who had responded that their buddy “Kellen” contracted the virus.

“There’s no corona. It’s a hoax,” the man retorted.

“Some people don’t get it,” Parr said as the two began to walk away, carrying on with their mission.

While offering another mask to a woman, she told them that “she has a strong immune system that really keeps fighting for me.”

Parr then asked the woman, “did you already get corona?”

“Well, we have it actually in our bodies you know,” she said. “And we know the size of the virus is 1,700 times smaller than your opening in your mask so it’s going to go straight through.”

“Where did you learn that?” Parr inquired.

“Well, I’m a health practitioner, and he’s a doctor so he knows,” she said, pointing to a man standing beside her.

When Parr asked the man what kind of doctor he was, the man replied that he’s a chiropractor.

“Nice. Does that deal a lot with the respiratory system?” Parr then asked, which was met with brief silence before the video cut to them asking others if they would like masks.

Some who Allen and Parr spoke to repeated the claim that the coronavirus is a hoax, as well as the conspiracy theory that people get COVID-19 from 5G cell towers. Other simply replied that they didn’t want a mask or didn’t need one.

In other conversations, the two again talked about their friend Kellen, who the pair said got sick right before a planned group trip to Ibiza, and had lost his sense of taste—one of the symptoms of COVID-19.

“I was telling him about when Kellen bit into his Double-Double, and he couldn’t taste it, and he cried,” Allen told one man in the video.

Throughout the video, the duo can be seen spending much of their time offering masks to passersby near booths where groups were calling on a petition to recall Gov. Gavin Newsom and to protect the Second Amendment.

“Nobody wants your masks. Why are you standing over (here)? Go away,” a woman operating the Recall Newsom booth pleaded to the comedians.

“Go away. You don’t hear me? Take the mask off, you might be able to hear me,” she said.

Allen replied that he had earplugs in to “try to block every orifice.”

As the two began to walk away, Parr asked Allen whether he thought the woman at the Recall booth was “negging” him—a reference to pick-up technique in dating where a suitor uses a backhanded compliment. The phrase was popularized by the reality TV series The Pickup Artist on VH1 in the late 2000s.

“Do you think she’s negging me because she likes me?” Parr asked.

“We don’t want masks. Sorry,” the woman quickly chimed in before Parr could finish his question.

“I guess The Pickup Artist was wrong,” a rejected Parr said.

“Nah, dude, they love you, dude,” Allen said, cheering up his partner.

Later, another man asked the duo if they were the “Antifa crowd” and why they were “burning down buildings, you know occupying people’s private property, things like that?”

Parr said that they only did that sort of stuff for a month in high school, but that since being suspended, they’ve “corrected” their behavior.

“And it was pretty awesome too, like you put your head through a wall,” Allen continued, referring to Parr.

“I put my head through a wall,” Parr told the man.

“That doesn’t surprise me,” the man said.

Near the end of the video, one man, whose face was blurred, asked if they had any cool masks. As he walked back to the two, appearing as if to see some of the masks, he openly coughed on them and walked away.

“Aww, dude” a surprised Allen said. “That was so unchill.”

“That was a real bummer,” Parr said, later staying optimistic while pulling out some hand sanitizer from his pocket. “We’re OK, we were like five feet away right?”

The duo’s spirits, however, seemed to be lifted as they danced to the song “Born to be Wild,” which was being played on the guitar by a street performer.

“So, it turns out there isn’t a shortage, people just don’t want to wear them,” Allen said.

“They think they suck because they think the coronavirus is a hoax,” added Parr. “We learned a lot today.”