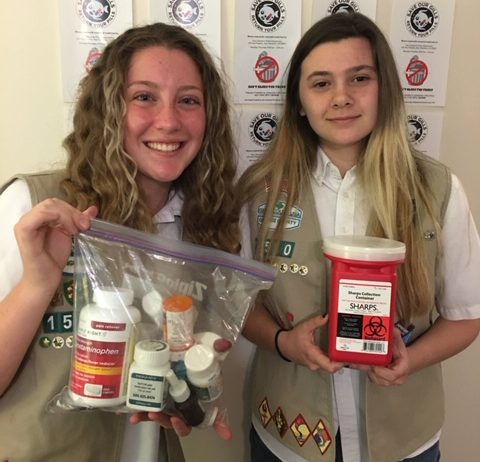 Editor’s Note: This story has been updated to include information on how to properly dispose of medication and used syringes.

Two local teens, both members of the Girl Scout Troop 1510, recently developed a dual campaign meant to increase awareness and create a system for the proper disposal of expired and unwanted medication, as well as for syringe needles.

Adelina Awtry, who graduated from San Clemente High School this summer, and Isabella Marcovecchio, a Capistrano Valley Christian School senior, launched their campaign as part of their Gold Award Projects and were designed to protect the beaches, oceans and water supply of the San Clemente area by keeping harmful trash off the beach and out of the water.

“Needles thrown directly into the garbage can cause injury, transmit disease and can accidentally end up on our beaches,” Awtry said in a press release. “By making a simple phone call, we can get needles picked up at our homes; it’s really easy!”

The slogans “Save our Gills—Return your Pills” and “Don’t Slash the Trash” have been created in conjunction with a local waste management company and the city of San Clemente, according to the Girl Scout troop.

“Adelina and Isabella started the project in 2017, a natural fit because both have always been concerned with the environment and love the ocean,” a Girl Scout Troop 1510 press release stated. “These disposal solutions not only protect the local environment now, but also raise awareness for future generations to come.”

According to the Girl Scout Troop, medications, if not disposed of properly, can pollute the water by releasing toxins into the ocean. Not all toxins, the troop said, are filtered by the reclamation plant during the water purification process.

“Teaching younger children about this issue is important,” Marcovecchio said in the press release. “I have younger sisters, and I want them to be aware that we can make a big difference by doing simple things.”

According to the release, the “Save our Gills-Return your Pills” campaign provides a dropbox at city hall at 910 Calle Negocio where all expired and unused medication can be returned.

However, the dropbox is currently located at the old city hall location at 100 Avenida Presidio and is closed to the public. The box, according to officials at the city, isn’t expected to be relocated to the new city hall on Negocio for about another year—when the new subdivision for the Orange County Sheriff’s Department within city hall is likely to be completed.

In the meantime, the city and the county advise the community not to flush medication down the toilet or drain. Instead medications should be added “to an undesirable substance such as cat litter, used coffee grounds, or food waste.”

The mixture should then be put “into a sealed disposable container such as an empty margarine tub, sauce jar or Ziploc bag. Afterward, the sealed container can be placed in the trash.

As for the disposal of used needles, the “Don’t Slash the Trash” campaign instructs people to place needles in an old laundry detergent bottle and then schedule a free pickup with CR&R.

CR&R encourages those scheduling a pickup for used syringes to place them in a store-bought, puncture-proof, one-way container. To schedule a pickup, contact 877.728.0446.