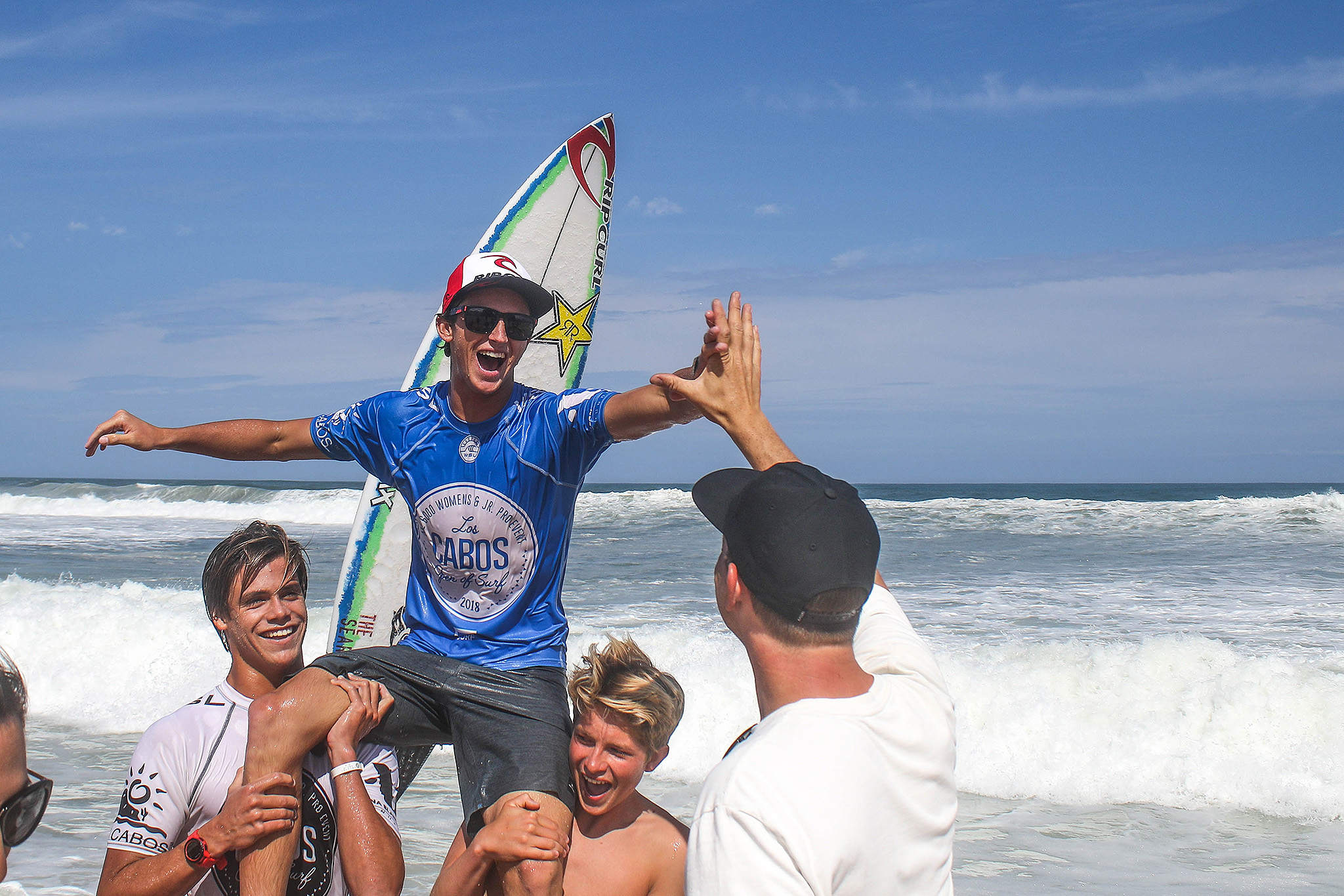 Eventually, all groms grow up. It’s a sad fact of life. It doesn’t mean you have to ditch your inner grom and can’t still revel in surfing’s good times, but we all make that transition from careless youth to focused maturity. The next generation of San Clemente groms appears to be asserting themselves as they step into young adulthood.

Last week at the World Surf League’s Los Cabos Open in San Jose Del Cabo, local surfers Crosby Colapinto and Kirra Pinkerton swept the Pro Junior division. For Colapinto, it was his first-ever WSL win. For Pinkerton, it was her third-straight Pro Junior victory this season.

“It just feels so nice to finally get a final and then to win, it is amazing,” Colapinto said.

Cabo isn’t exactly known for surf of unusual size and girth, but the Los Cabos Open lucked into the first legit run of south swell of the summer and the surf was absolutely pumping throughout the contest.

“It was crazy to see these waves like this all day, it looked like Sunset (Hawaii) out there,” Colapinto said of the competition. “I didn’t catch a lot of waves today, so I feel like I saved my energy even coming out of the semifinal. I learned it takes everything you have to win one of these events. You have to surf smart, put as much effort as you can into one wave and never give up at any point.”

It goes without saying that young Colapinto’s been taking notes as he’s watched his older brother, Griffin, succeed the WSL’s Championship Tour. In only his first year competing at the most elite level in the world, the rookie finds himself comfortably sitting 12th in the world (tied with fellow San Clemente surfer Kolohe Andino) and well in contention for 2018 Rookie of the Year.

“I’ve been calling my brother and he’s been telling me to just wait for the best wave, get a good score, then wait again,” continued Crosby, “which worked out great getting the best wave out there and getting an 8.17 on it to start. One of my goals this year was to win a Pro Junior, so to do it here was pretty next level. I want to make it to Worlds (Junior Championship) as well and this is a good head start.”

“We were all at the house together joking that we were all going to make the finals, but none of us thought it would actually happen,” Matson said. “The first few rounds I felt nervous, but by the time the semifinals were on, I was really confident. I was trying to pick off the best waves and just felt in rhythm, even though it was hard out there with a lot of waves breaking. It feels great to get back to finals since I haven’t had too many good results this year, and now I’m way more confident moving forward.”

On the women’s side, Pinkerton had to grind through some serious talent to earn her first-place trophy. Facing a stacked field of international talent in the final, she got going early in the final and found a way to edge out the competition, winning the contest by a one-point margin.

“All of those girls deserved to win, they were ripping so hard and pushed me to my limits, so it felt great to come out on top in that final,” Pinkerton said when it was all done and dusted. “It was super important to get that start and I would’ve been a lot more nervous going through the rest of that heat without it. I was so relieved when they announced that score and that helped keep me calm despite not being able to get a solid backup.

“That’s the second time I’ve won going left at a righthand pointbreak,” laughed Pinkerton after the final. “I hope this is the year I can take the North America title. It’s a good start and it’s better than I expected, now I just want to keep it going for a shot at Worlds.”

As so many parents have stammered over the years, they just grow up so fast.