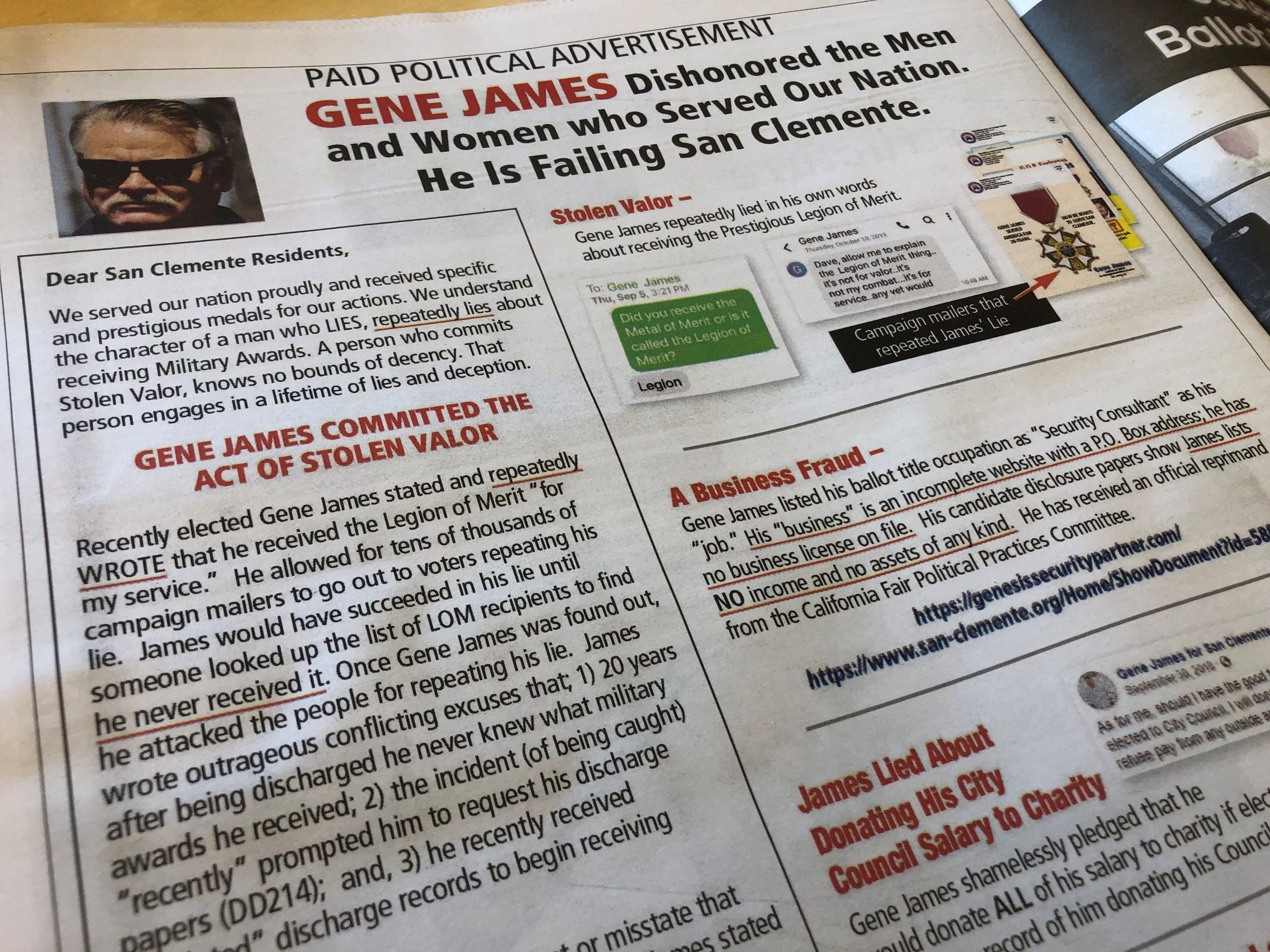 Editor’s Note: This story has been updated to include information on the Fair Political Practices Commission’s policies as well as comments from Jon Fleischman, Natalie Blanning Weber and Councilmember Gene James.

A full-page advertisement in the Oct. 8 edition of San Clemente Times depicts incumbent Councilmember Gene James as a “dishonorable” man who “failed” the city.

But Kieu Hoang, the man credited for funding the ad in a disclaimer near the bottom, has come forward stating any flyers with his name are in violation of the Fair Political Practices Commission.

The political ad details claims against James alleging business fraud and Stolen Valor—a claim currently being raised in a defamation suit against James by one of his former political associates, Jim Bieber. Bieber, who worked for James’ campaign in 2019, alleges the then-candidate had misled members of his camp with false information that he possessed a prestigious military decoration he was never actually awarded.

At the bottom of the page, a disclaimer states it was paid for by the California Homeowners Association with “major committee funding from Kieu Hoang.” Attempts to reach a spokesperson with the PAC were unsuccessful or met with phone hang-ups.

San Clemente Times did, however, successfully reach Hoang by phone. Hoang, a Vietnamese-born American billionaire, denied knowledge of the mailers and referred questions to his attorney.

“We are contacting California Homeowners Association to determine if this flyers was released in error, was fully or partially recycled from a previous election or was generated by a third party,” said Robert Blackmon, an attorney representing Hoang. “In any case, Mr. Hoang is abstaining from participation in this election season in any way and has not funded any PAC or candidate.”

The Fair Political Practices Commission currently has an open case against Hoang regarding potential violations of campaign finance and advertisement disclaimer provisions of the Political Reform Act—an incident stemming from February ahead of the March primary.

The Voice of OC previously reported that Hoang had denied any wrongdoing and that officials haven’t said what the investigation is about, other than it being centered on advertisements.

Hoang reportedly put at least $50,000 toward a group that’s been funding attack ads against Orange County Supervisor Andrew Do and ads supporting his opponent, Santa Ana Mayor Miguel Pulido. He also has put $1.1 million into a group created to recall a majority of the Westminster City Council, according to Hoang’s attorney.

Requests to be connected to a representative with California Homeowners Association remained unanswered prior to this article’s publishing. According to its website, the CHA describes itself as one of California’s most active political action committees working in every area of the state.

“Established in 2009, the California Homeowners Association is a non-partisan Political Action Committee formed to support fiscally responsible candidates,” the website states. “Our donors are wide ranging from individuals, to small businesses to labor organizations all with one goal—protecting homeowners.”

In the FPPC’s campaign manual, it states that the California Political Reform Act requires primarily formed ballot measure and general purpose committees to specifically identify in a disclosure on ads the top contributors of $50,000 or more.

A general purpose recipient committee is formed when an individual or group receives contributions totaling $2,000 or more in a calendar year for the purpose of supporting or opposing one or more state or local candidates or ballot measures or to make contributions to other political committees.

Jon Fleischman is the former executive director of the Republican Party of California and has since founded a Fleischman Consulting Group, a firm specializing in national, state and local political affairs.

He says that even if a PAC spends all the money that a donor gave the group, the donor’s name will still appear in a disclosure for a calendar year.

“The FPPC, in trying to uphold transparency, created a rule where if someone donates a certain amount of money, the PAC name, as it appears in a disclosure, now has to be changed to include the donor’s name,” Fleischman said.

The FPPC denied SC Times‘ requests for comment and insight on existing policies, due to the open investigation against Hoang.

“It’s not surprising that Kieu Hoang may have been alarmed to learn about these mailers with his name on them when his donation (to the PAC) was made during the primary election,” Fleischman said.

James tells SC Times he has complete confidence in the ability of the Fair Political Practice Commission “to identify those who have unfortunately conducted this wrongdoing.”

“I will continue to focus my campaign on delivering positive messages to the voters of San Clemente,” James said.

Upon the posting of this article, SC Times received a statement from Natalie Blanning Weber, an officer with the California Homeowners Association.

“California law requires us to list the last major donor to a PAC from the last year on all materials both print and digital,” Blanning Weber said. “Failing to do so on our part would be a violation of the rules. You have the story completely backwards. The story and headline are particularly misleading and a disservice to the public.”

She added that neither Kieu Hoang nor his attorney are filing a complaint with the FPPC. SC Times has submitted a request for confirmation with the FPPC and Hoang’s legal team.

“California Homeowners is concerned with good governance, Councilman Gene James is one of the most unethical local elected officials in California which is way we chose to highlight his egregious record,” Blanning Weber said. “James actually has a reprimand from the FPPC for failing to report interests he holds.”

In December 2019, the FPPC issued a warning to James regarding his failure to report interest in property in San Clemente.

“Voters should be aware of James’ unique lack of character and honesty as his moral failings have spilled over into bad public policy,” Blanning Weber said.

On Thursday, October 22, candidates and PACs are expected to submit campaign expenditures for a quarterly deadline. The next deadline for campaign statement filings is not until February 1, 2021—meaning reports of campaign spending (potentially on more political mailers) after Oct. 17 will not be reported until after the new year.

“It’s an unfortunate biproduct of contribution limits in small races like city council elections,” Fleischman said. “People are going to try and find other ways around these set limitations.”