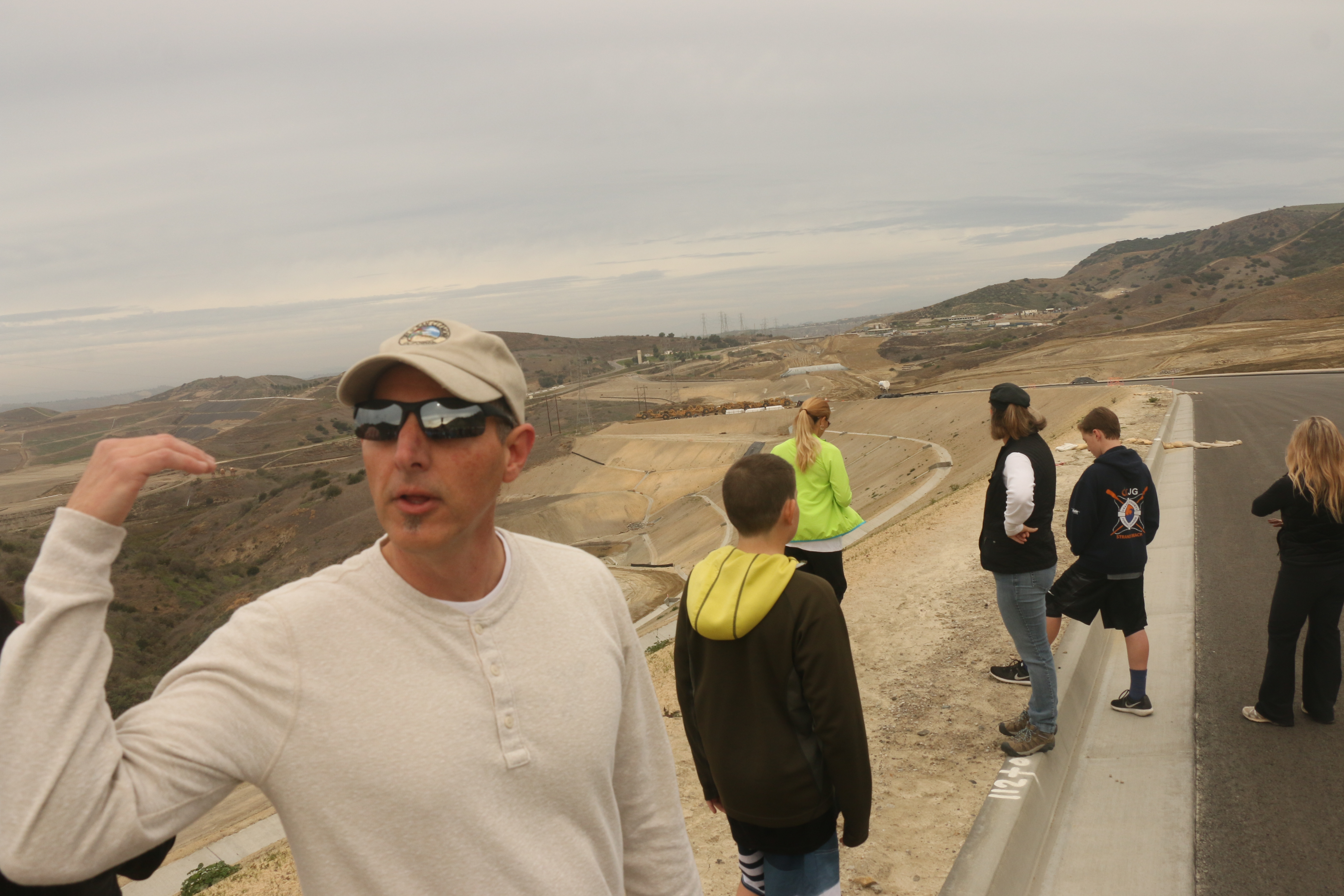 Long-Awaited La Pata Extension to be Finished in Fall

The highly anticipated connection of Avenida La Pata from the edge of San Clemente to just outside the city limits of San Juan Capistrano at La Pata Avenue is beginning to take its completed form.

On Saturday, Jan. 23, nearly 200 area residents attended the “Peek at La Pata” hike, a journey from Camino Del Rio in San Clemente to the highest point of the arterial highway to view how far the project has come along.

La Pata is expected to be four lanes (two in each direction), and the speed limit for the majority of the stretch will be 50 miles per hour.

The project is estimated to cost $127 million, paid for by state and Orange County Transportation Authority’s Measure M2 funds as well as various other funding. The road goes straight through land facilitated by the Prima Deshecha Landfill. The project will also widen the end of La Pata Avenue in San Juan and connect with Calle Saluda in San Clemente, as well as add a connection to Camino Del Rio.

City engineers said they hope the project will help take some of the strain off traffic backups that occur while the I-5 widening projects continue.

For more information on the La Pata Extension, visit pcpw.ocpublicworks.com/projects/lapata.[/box]

The project began in spring 2014 and is expected to be completed by this fall.

Hike participants Chris and Gemma Landay of San Clemente said the opening of La Pata will cut down their commute time when traffic on Interstate 5 becomes congested.

“I’ll definitely use it to get out to Rancho Santa Margarita and parts of San Juan,” Chris said.

Gemma said her current commute to San Juan can be as long as 30 minutes on some days when traffic is exceptionally busy.

“I work in San Juan Capistrano, and it will cut down the time on that,” Gemma said. “My commute is good until you hit Ortega, and then that area gets really crowded.”

The predicted traffic on the La Pata extension was analyzed in reports that can be reviewed on Orange County’s website, but accurate figures won’t be available until the road opens.

“The La Pata extension is a benefit for San Clemente residents and helps with our intercity circulation because (Camino) Del Rio connects with it and gives people other avenues,” Bonigut said. “It gives them an alternative route. It also gives us another emergency escape route for whatever disaster could occur.”

Bonigut said he has heard a lot of positive feedback regarding the upcoming opening of the road.

“When I talked to people on Saturday’s walk, they were happy to have it done,” he said. “We’re also doing bike lanes and pedestrian sidewalks.”

The bike lanes will be striped like you see in town, and a meandering sidewalk will be adjacent to the road.

Biking and hiking trail connectivity will be completed with the opening of a pedestrian bridge connecting the Prima Deshecha Trail and Forster Ridgeline Trail, which is part of the County’s Master Plan of Regional Riding and Hiking Trails, according to an Orange County press release.

“It also serves as a maintenance road for the utility companies,” Bonigut said during the hike.
Jennifer Rosales, a city of San Clemente transportation engineer, worked with residents of the area since October to come up with a plan to alleviate the excess traffic. The Planning Commission recently approved the construction of roundabouts at Camino De Los Mares and the Camino Del Rio intersections.
George Alvarez, San Juan Capistrano city engineer, said he hasn’t heard any negative comments about the opening of La Pata and that it should provide a much needed route for the city’s residents.

“Instead of having to travel from Ortega Highway, you can turn left onto La Pata and that should help reduce some of the traffic through our city,” Alvarez said. “If there’s a mishap on I-5, it gives you a parallel route.”

Alvarez said he hasn’t spoken with fire department officials or local Orange County sheriffs, but he said, “It’s always good to have as much access to San Clemente as possible. That’s been on the plans for decades. There are some students from Talega who attend San Juan Hills High School.”

Students living in the Talega subdivision, as well as Ladera Ranch, will have priority to attend San Juan Hills because of the Mello-Roos tax imposed on the subdivision, which provides funding for new facilities that included the “acquisition and construction” of the school. New classrooms are planned to accommodate the incoming students.
Although Dana Point will most likely see the smallest direct effect from the extension, city officials said the completion of La Pata will also give the city some much-needed traffic relief in an area where the city’s residents enter and exit I-5 from Pacific Coast Highway along the stretch of the freeway running past the city between San Clemente and San Juan.

“While the city has not taken a formal position on the La Pata Extension, I see a benefit to Dana Point if it provides traffic relief on Interstate 5 and a more direct route to school for our Capistrano Beach students who attend San Juan Hills High School,” said Doug Chotkevys, Dana Point city manager.
Lisa Bartlett, Orange County fifth district supervisor and Board of Supervisors chairwoman, agreed, adding that she expects the opening of La Pata will also result in traffic causing less of a strain on all of Dana Point’s major arterial roadways.
“The La Pata Extension, once complete, will provide exceptional and enhanced regional mobility,” said Bartlett, a 26-year resident of Dana Point who also served as the city’s mayor.
“We definitely needed a redundant route,” she said. “The extension enhances public safety and improves mobility.”
Bartlett said the La Pata Extension is 85 percent complete, and the county will celebrate the connection with a ribbon cutting to open it to traffic and expects to host a pre-opening event later in the fall that would traverse the whole extension.

—Andrea Swayne contributed to this report.