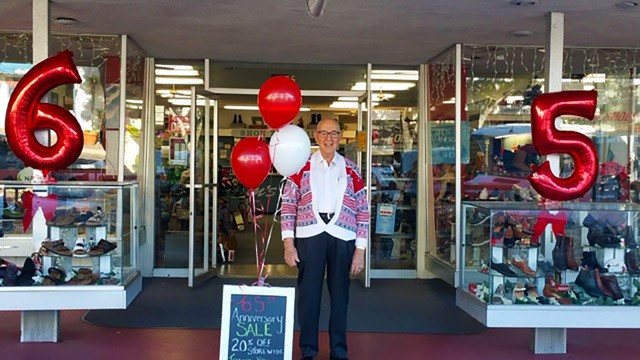 Sam Tiberi’s most surprising customer walked into his San Clemente shoe store looking to outfit his grandchild with baby shoes.

“There were Secret Service men everywhere,” Tiberi recalled during a 2010 event at Casa Romantica Cultural Center and Gardens. “I had the jitters.”

“Do you know my dad?” asked the baby’s mother.

Tiberi proceeded to show President Richard M. Nixon how Sam’s Shoes repaired shoes. That led to Tiberi repairing a pair of shoes for the nation’s 37th president, prompting the gift of an autographed book.

San Clemente is remembering Sam Tiberi, who died March 13 at age 89, as the operator of one of the longest-standing businesses in town history.

He established Sam’s Shoes in 1953. It’s still serving the community. He died at home following a lengthy illness, the family announced.

His wife Carol recently shared some snippets about Sam:

— As the only child of a shoe repairman, he began learning and working in the trade at age 6.

— He left high school to become a Navy medic, attached to the Marine Corps at Camp Pendleton.

— With limited training but with “very skilled hands,” he delivered 37 babies and assisted with many surgeries, including a solo appendectomy when the doctor had a broken hand.

— A doctor was so impressed with his surgical skills that he offered to help get Tiberi into medical school on the GI Bill, but the mentor was killed in the Korean War.

— Returning to his roots—shoe-repair skills—he opened his first shop on Avenida Del Mar in 1953.

— Camp Pendleton boot repairs for service members emerged as a major part of the business, leading Sam’s Shoes to outgrow multiple locations before settling into its present spacious store—in 1963—at 135 Del Mar.

— Having learned to play the trumpet as a boy, he returned to it in San Clemente, cultivating a new sidelight, the Royal Knights.

— The eight-piece Big Band performed for 26 years around Southern California, including Disneyland, the Queen Mary, weddings and fraternal organizations’ events.

— The band’s final gig, in 1988, entertained at San Clemente’s celebration of 60 years of cityhood.

— In retirement, Sam and wife Carol traveled extensively. He remained a big supporter of charities and institutions from the Marines to Our Lady of Fatima Catholic Church.

His advice to businesses? “Treat people personally . . . try to remember them . . . try to help them with what they want,” he once said in an Orange County Register interview.

He is survived by wife Carol, five children, nine grandchildren and seven great-grandchildren.

“His enthusiasm for life, generosity of spirit and boundless love will be missed by all who knew him,” the family said.

A celebration of life will be announced once the coronavirus pandemic subsides.